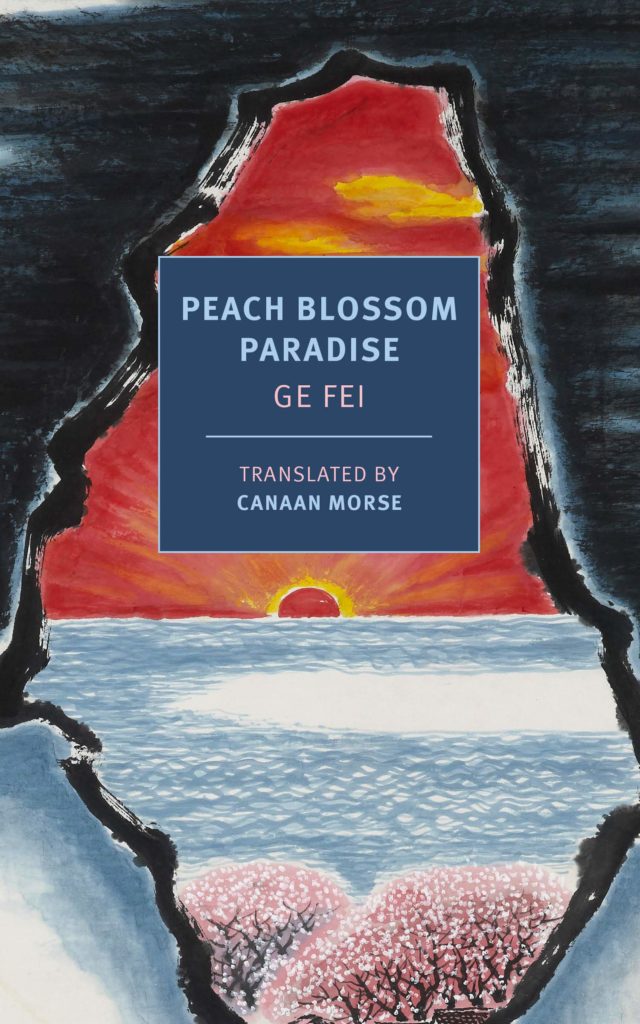 The following is excerpted from Ge Fei's novel, Peach Blossom Paradise, translated by Canaan Morse. Fei is the pen name of Liu Yong, who was born in Jiangsu Province in 1964. His work includes The Invisibility Cloak Flock of Brown Birds. He was awarded the 2014 Lu Xun Literary Prize and the 2015 Mao Dun Prize for Fiction. Morse (translator) is a poet and editor. He cofounded the literary quarterly Pathlight: New Chinese Writing.

A stream of visitors showed up the day after Father disappeared.

Tan Shuijin and Gao Caixia, the ferryman and his wife, arrived first. There had been no traffic at all at the ford yesterday, they said, and Shuijin had spent the whole day playing go with his son inside the ferry. They were both good go players, Shuijin told Mother. Skill at the game was passed down through the family. Apparently his own father had died at the go board, right after losing a whole field of pieces and spitting up blood. That afternoon, he and his son had played three rounds of the game; Shuijin won the first two, and the third was still going on when the downpour started. “Boy, that was a big storm,” Shuijin said, his wife chiming in, “Big, oh boy, it was big.” Mother sat quietly and listened to them babble for as long as patience would allow before finally interrupting, “Have either of you seen the man of this house?”

Gao Caixia said no, she hadn’t, and Shuijin shook his head. “Not a single person crossed the river yesterday afternoon; no, I didn’t even see a bird cross the river, much less a passenger. We came out here early this morning to tell you that. We haven’t seen your old man. My son and I were playing go in the boat, played four rounds of it.”

“Not four rounds, three, and you didn’t finish the last one before the rain came,” Gao Caixia corrected him. The pair went through the whole story backward and upside down one more time, lingering on until noon before marching off in a huff.

As they were leaving, Baoshen showed in an old woman who wore dirty, tattered clothing and whom nobody recognized. She swore she had seen Father leave with her own eyes. “Which way did he go?” Mother asked. “Bring me something to eat first,” the old lady replied.

Magpie rushed off to the kitchen, returning with a full platter of sticky-rice cakes. The old lady ate hand to mouth, swallowing five in quick succession and pocketing three more. Then she burped heavily and turned to go. Lilypad grabbed her. “You still haven’t told us where the master went.”

The crone pointed to the ceiling. “Up to heaven.”

“What is that supposed to mean?” Baoshen asked.

The crone pointed once more at the eaves. “He went up to heaven. You needn’t wait for him. A crimson cloud appeared from the southeast and descended to him in the form of a magical kirin. He got onto its back, and rode off into the sky. As he rose, he dropped a piece of cloth . . .” With a shivering hand she drew an old handkerchief from her ragged clothing and passed it to Lilypad. “Have a look. Isn’t this his?”

Lilypad took it from her and examined it closely. “It sure is, no doubt about it. It’s an old one, but that’s the plum flower I embroidered for him in the corner.”

As they were leaving, Baoshen showed in an old woman who wore dirty, tattered clothing and whom nobody recognized.

“Well, there you are.” The crone tucked her hands into her sleeves and walked out.

Mother’s face assumed a look of quiet shock, and her eyes turned confused and distant. After a long silence, she said, “It isn’t very likely that he could have ascended to heaven. But where did that handkerchief come from?”

That afternoon, as Xiumi climbed the stairs to her room for a nap, a young woman in a red jacket arrived at their front door. She seemed to be in her early twenties, though her face was covered in pockmarks. She said she had been walking all morning, and had walked so far that the soles of her shoes were coming unstitched. She came from Beili, a village at least six or seven miles from Puji. No matter how Mother entreated her to come in for tea, she refused, claiming she had only a short message for Mother, and had to go back immediately. She leaned on the door frame and told her story.

It was the evening of the day before, after the rain had been falling for a while, when she remembered that she had hung a basket of soybeans out to dry from the roof of the pigsty, and ran out in the rain to fetch it. In the falling darkness she caught sight of a man, huddled beneath the eaves of the pigsty, holding a wicker suitcase in one hand and leaning on a cane.

“I had no idea that it was the master of your house. It was raining so hard. I asked him where he came from, and he said Puji village. I asked where he was headed, but he wouldn’t tell me, and when I invited him to come inside to wait out the rain, he refused. So I brought the beans in and told my mother-in-law about him. She said that if he was from Puji, that made him a neighbor, and the least we could do was lend him an umbrella. So I grabbed one and went back out for him, but I couldn’t find hide nor hair! And that rain coming down so fast. Later that night, when my husband returned home from drinking at his uncle’s, he told me a couple of porters had come by carrying lanterns and asking for a lost old man, and I knew it must have been the man whom I had seen. That’s what I came to tell you.”

Having provided this news, the pockmarked young woman set off homeward again, refusing to stay even for a glass of water because, she said, they needed her for the wheat harvest. Mother immediately pressed Baoshen to send people in her direction in search of Father, but just as Baoshen was getting ready to leave, a smiling Hua Erniang brought someone else through the front door.

This last guest wasn’t connected to Father’s disappearance. He was a man in his forties with a short goatee and attentively coiffed hair, dressed in a traditional shirt of white cloth. Pince-nez spectacles sat on his nose, while a large pipe hung from his mouth.

It was the evening of the day before, after the rain had been falling for a while, when she remembered that she had hung a basket of soybeans out to dry from the roof of the pigsty.

The very sight of him instantaneously dispelled the clouds from Mother’s expression. She invited him into the guest room, peppering him with questions the whole way. Xiumi, Magpie, and Lilypad all came in to be introduced. The man sat with legs crossed, smoking his pipe with an air of sincere self-satisfaction. It was the first time Xiumi had smelled tobacco smoke since the onset of Father’s madness. The man’s name was Zhang Jiyuan, and he had supposedly come from Meicheng. Mother initially told Xiumi that he was a cousin, but later instructed her to call him Uncle. To this, the man named Zhang Jiyuan spoke up. “Just think of me as your elder brother.”

“But that would jumble up seniority,” Mother said, smiling.

“Then jumble it,” Zhang Jiyuan responded, carelessly. “Everything’s jumbled up these days. Let’s go ahead and jumble it all into jambalaya.” He laughed loudly at his own joke.

One more lunatic. He pared his fingernails, jiggled his legs, and spoke with a powerful condescension. This elder brother made Xiumi deeply uncomfortable. His skin was pale and his cheekbones high, yet his narrow eyes were set deeply into his skull, giving him a sort of feminine delicacy. Though his aloof demeanor seemed to suggest arrogance, a closer look revealed a cold, deep-seated gloominess at its heart, as if he were a being from another world.

He had been staying in Meicheng to recover from illness, and would be in Puji for a short stretch. But if he were sick, why would he leave Meicheng and travel out here to the countryside? When Grandma was alive, Xiumi and Mother often visited Meicheng. How come she had never seen him before? According to Mother, he was a fine writer and a man of the world; he had been to Japan, and lived several years in both Nanjing and Beiping.

Mother ordered Lilypad to prepare Father’s room for him, and sat and chatted with him in the living room until the lamps were lit and the call for dinner came. Baoshen and Magpie were very deferential at the dinner table, calling him Uncle. Only Lilypad seemed unimpressed by his presence, and watched him with a faint suspicion. Zhang Jiyuan talked forcefully and at length about the state of the outside world, touching on everything from reform and revolution to “piles of bones” and “rivers of blood.” Baoshen shook his head and sighed, “The world has turned upside down.”

After the meal, Xiumi sneaked into the kitchen to talk to Lilypad, who was washing dishes alone. They chatted about the crazy old woman’s handkerchief, and about Baoshen’s business with Miss Sun. Lilypad spoke on the latter subject with great interest, though Xiumi didn’t always comprehend her. On the topic of their new guest, however, Lilypad was as much in the dark as Xiumi. “His family name is Zhang, but your mother’s is Wen, and she doesn’t have any sisters, so how could he be your uncle? There’s a good chance he isn’t a direct relation at all. I never heard his name once in all the years I’ve been in this house. He claims he’s here because of an illness, but does he look like an invalid to you? Clopping around in those heeled shoes of his so that even the water in the basin ripples. And the weirdest thing”—Lilypad stretched her neck to peer out the window before continuing—“the weirdest thing is, your mother only just came home from Meicheng yesterday. If Mr. Mustache had planned to visit us, why didn’t he come with her? Instead of just walking in here just as your father walked out, as if they planned the whole thing. Doesn’t that seem strange to you?”

Xiumi asked if what he had said at dinner about “rivers of blood” was true. “Of course it’s true,” Lilypad replied. “The whole world is falling apart.”

Mother ordered Lilypad to prepare Father’s room for him, and sat and chatted with him in the living room until the lamps were lit and the call for dinner came.

Hearing this, Xiumi fell silent, absorbed in her own dark anxieties. Seeing her lost in thought beside the sink, Lilypad dunked a hand in the water and flicked it at her cheek.

“If Puji fell apart, what would happen?” Xiumi asked.

Lilypad sighed. “Everything in this world can be predicted except for trouble. Every time trouble appears it’s different, and only after it starts do you find out what it’s really like.”

Excerpted from Peach Blossom Paradise by Ge Fei, translated by Canaan Morse. Excerpted with the permission of New York Review of Books.

Andrzej Sapkowski on the Mythologies Behind The Witcher 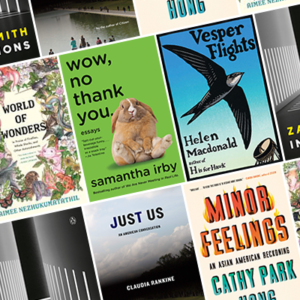