On Episode 183 of The Quarantine Tapes, Paul Holdengräber is joined by poet and professor Paul Muldoon. In this conversation, Paul offers a thoughtful look at his process as a poet and what it means to write work that speaks to this moment. The pair discuss some of Paul’s influences as a writer, including T.S. Eliot and John Donne. He reads from a poem he worked on in the early weeks of the pandemic, “Plaguey Hill,” and previews his recently announced project with Paul McCartney.

Paul brings us all into his practice as both a teacher and a writer, explains how important unknowing is to writing, and confronts what it means to approach the page from a place of innocence and ignorance.

Paul Muldoon: The bit that is generally not so honored and so valorized is ignorance, unknowing, innocence. That’s what I try to teach my students, and that’s what I try to remember myself anytime I try to sit down to write something. I write in the absolute conviction that I have no idea what I’m doing.

Paul Muldoon was born in County Armagh in 1951. He now lives in New York. A former radio and television producer for the BBC in Belfast, he has taught at Princeton University for more than thirty years. He is the author of fourteen collections of poetry including Howdie-Skelp, due from FSG and Faber and Faber in 2021. Among his awards are the 1972 Eric Gregory Award, the 1980 Sir Geoffrey Faber Memorial Award, the 1994 T.S. Eliot Prize, the 1997 Irish Times Poetry Prize, the 2003 Pulitzer Prize, the 2003 Griffin International Prize for Poetry, the 2004 American Ireland Fund Literary Award, the 2004 Shakespeare Prize, the 2006 European Prize for Poetry, the 2015 Pigott Poetry Prize, the 2017 Queens Gold Medal for Poetry, and the 2020 Michael Marks Award. He is a Fellow of the Royal Society for Literature and a Fellow of the American Academy of Arts and Letters.

Goatskin, Tree Bark, and One Expensive Scribe: How “The King of the World’s Booksellers” Produced Manuscripts 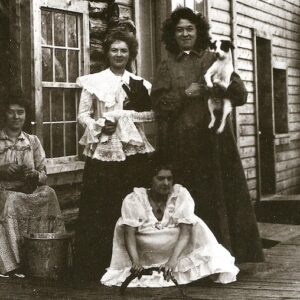 In late 1898, in a snow-choked mountain pass in southeast Alaska, a woman named Anna DeGraf said a prayer to herself before...
© LitHub
Back to top