VIA THE BARNES AND NOBLE REVIEW

Paul Auster is Speaking Directly to Me Through His Books

As part of the 25th anniversary of their Discover Great New Writers program, Barnes & Noble has been asking some of their favorite writers to reflect on titles from early in the program that have withstood the test of time. In this installment, Mark Andrew Ferguson offers his thoughts on Paul Auster’s Leviathan.

Paul Auster speaks to me.

Not in person. And though the colloquial sense of the term applies (as in he really speaks to me, man) I mean it literally. When reading one of his books, it feels like the actual living entity that is Paul Auster speaks directly to me and me alone.

Shortly after the publication of my first novel, I re-read Leviathan in preparation for this essay. On page five, his protagonist and alter ego, Peter Aaron, tells me, “my books are published… Without even knowing it, I enter the lives of strangers, and for as long as they have my book in their hands, my words are the only reality that exists for them.”

I sent Mr. Auster a copy of my book a year back, and despite the warmth of his letter in response I’m terrified that he’ll actually read it. But here, on page 25 of Leviathan, Peter soothes me by saying, “I always take novels seriously. Especially when they are given to me by the author.”

But it’s not just Leviathan, and it’s not just because I’m a writer. Auster has spoken to me for years. Each of his books seems perfectly chosen for the particular moment of my reading it. The effect is so consistent, so striking, that I’ve reluctantly come to understand that it has nothing to do with me. Mr. Auster speaks in precisely the same way to thousands of readers all over the world. This is his power.

But how does he wield it so consistently?

Published in 1992—ten years after The Invention of Solitude and five after The New York Trilogy—Leviathan was Auster’s second Barnes & Noble Discover Great New Writers selection after The Music of Chance. The book takes the form of a confession by a writer named Peter Aaron (note the initials) about his friend Benjamin Sachs (and what to make of these initials?). In the first paragraph, a man blows himself up on the side of the road in northern Wisconsin, a man only Peter knows to be Sachs. The book is Peter’s attempt to get Sachs’s story on paper before the FBI discovers the dead man’s identity and ruins his reputation forever. Peter’s incessant need to convince the reader he can be trusted is balanced by his equally incessant need to admit that he can’t profess to know anything about anything at all. His uncertainty is well-founded, of course, because Sachs’s journey from promising writer to bomb-happy drifter is marked by uncanny coincidences, one after another, each more charged with mysterious meaning than the last.

In other words, this book is brimming with what one might call Auster Stuff. Identity is fluid, subjectivity flawed, and the rules governing reality are bizarre and elusive. Understanding those rules requires constant attention to the connections between seemingly unrelated events. Peter describes Sachs the way I would describe Auster: “He was able to read the whole world as though it were a work of the imagination, turning documented events into literary symbols, tropes that pointed to some dark, complex pattern embedded in the real.”

The impossible strangeness of reality, the interconnectedness of all things, the resonances that reveal those connections: these are the elements from which an Auster novel is made and from which Auster draws his power. It’s a wonderfully clever manipulation, a perfectly circular argument that says truth is stranger than fiction, coincidence rife with meaning. By way of evidence, here’s a completely believable work of fiction in which deeply meaningful coincidences occur.

If the novel speaks to you, you’ll find yourself buying into the worldview, too. Even if you’re skeptical, once you’re tuned to the key of Auster—even temporarily—you can’t help but notice the kinds of things Auster himself might notice. It’s called a “frequency illusion,” and it’s the same thing that happens when you learn a new word for the first time and suddenly hear it everywhere you go. In this case, the frequency illusion is directed at funny little coincidences and resonances (of which, in true Austerian hall-of-mirrors fashion, this very phenomenon is one).

So perhaps you dream about an old friend and run into her unexpectedly the next day. Or perhaps you miss your train and, while awaiting the next one, you see an old man who looks strikingly like your deceased grandfather. It could be anything at all. Under normal circumstances these kinds of things are quickly forgotten. But if you’re tuned to the the key of Auster, it feels as though the universe is trying to tell you something.

And when the Auster book you’re reading inevitably becomes the focus of this overactive sense of the uncanny, when you start to unconsciously seek out resonances between the book you’re reading and the life you’re living—this is when it begins to feel as though Paul has written the book for you and you alone. This is when it may suddenly seem plausible that he wrote a book 23 years ago just so you could read it, right now, today.

The more of his books you read, the stronger the effect grows. Themes, characters and stories are repeated, enhancing your sense that everything really is connected. The books begin to represent a matrix of thought, a cat’s cradle of rumination, a spider web of sticky associations. You’re stuck in there long after a book ends. And out in the real world, when something eerie calls to mind the dark, complex pattern embedded in the real, it feels as though Paul is whispering in your ear.

People like myself are probably why Auster has Peter say, “Sometimes people turn out to be crazy. They read your book and… they imagine that you belong to them, that you’re the only friend they have in the world.”

I want to reassure Mr. Auster: I’m not about to start stealing your mail or rifling through your garbage. I don’t have your face plastered all over a secret room beneath the floorboards. It’s not like that. But when one allows oneself to float freely in the Austerian ether, things tend to get weird. Weird in a way that’s not easy to rationalize. Weirder than fiction, even.

In Leviathan, Sachs comes to assume the identity of a domestic terrorist named the Phantom of Liberty. The Phantom blows up replicas of the Statue of Liberty all over the country, and sends political diatribes to newspapers by way of explanation. On April 25th

of this year, the day after I finished reading Leviathan, I was driving down the west side of Manhattan. Were it not for a building blocking my view temporarily, I would have had a direct line of sight to the Statue herself at exactly the moment when my local NPR station ran a story that made me laugh in disbelief. The day before, the Statue of Liberty and the island on which she stands had been evacuated. The reason? A bomb scare.

Hey, Paul. It’s good to hear from you.

Feature image: detail from Jonah and The Leviathan. 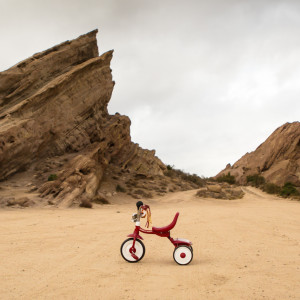 Annie McGreevy and Claire Vaye Watkins met at the Ohio State University MFA program in 2007. Ahead of the release of Annie’s...
© LitHub
Back to top