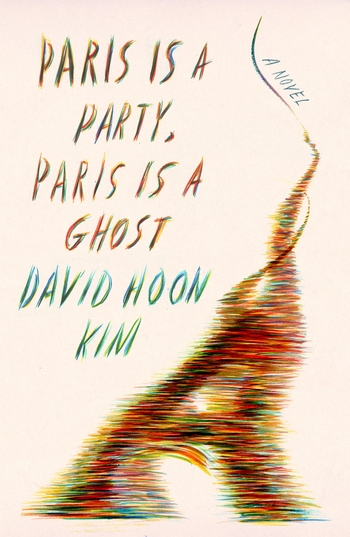 The following is excerpted from David Hoon Kim's debut novel, Paris is a Party, Paris is a Ghost. Kim attended the Iowa Writers’ Workshop and the Stegner Program, and his fiction has appeared in The New Yorker, Brins d'éternité, Le Sabord and XYZ La revue de la nouvelle He writes in both English and French.

My father, who had always wanted me to join him in the textile business, didn’t understand why I had to go to France to study Danish literature. I explained to him that it was because I was expanding my research to English literature. To that effect, I had applied for an Erasmus grant. He was still puzzled, I could tell, the morning of my departure. Why not go to England, then? he seemed to want to ask at the station, where he had come to see me off. But England was even farther away, so what was the point in asking? His expression said it all. Nevertheless, he accepted the situation with equanimity and good faith. I think he suspected, on some level, that my departure had nothing to do with English literature or Danish literature. (I had never told him about Ditte. Was it because I thought he wouldn’t understand?) He didn’t say it, but I knew he was lonely since the death of my mother. At least he still had his business, which designed and manufactured high-end blankets and shawls made from Faroese wool. He was far from helpless, I told myself as my train pulled out of Copenhagen Central and his silhouette grew smaller and smaller.

I had planned to fly to Paris, but my father had insisted that I take the train, though it meant transferring to the Deutsche Bahn, whose trains used a different voltage and, consequently, a different system of fail-safes which my father considered inferior to those used in Denmark. Anything, in his eyes, was better than flying. He had started on about the superiority of electric over diesel, which led to a comparison of cab-signaling and inductive systems, the merits and shortcomings of each . . . until I finally relented and let him buy me a first-class ticket at full price. I had to switch trains in Frankfurt, and the Thalys car I boarded was empty except for a girl, who happened to be in my seat. She was gazing out the window, chin cupped in the palm of her hand and tears streaming down her face. With her short brown hair and olive-complexioned skin, she reminded me of a Velázquez I’d seen at the SMK. I chose a seat at random, a few rows away but facing her so that she remained visible to me through a gap between the seats. In that manner, I watched her as she continued to gaze, unseeing, at the passing scenery and occasionally blinked her wet eyes.

The car I boarded was empty except for a girl, who happened to be in my seat. She was gazing out the window, with tears streaming down her face.

I’m not sure at what point I began to think that she might also be headed for Paris. Once the idea entered my head, it was as if I had always known. I imagined myself getting up from my seat and approaching her, striking up a conversation. The fact that she was sitting where she was took on a bright new meaning: out of all the seats, she had chosen mine. It was as if she had chosen me, and I would be a fool not to interpret it as a sign. Even then, I continued to sit there, unmoving. I knew myself well enough to know that I would do nothing; instead, I would go over the pros and cons until she left the train and out of my life forever. In that manner I was silently berating myself when I felt a presence at my side: the ticket controller. I hadn’t heard him enter the compartment. After examining my ticket, he informed me that I couldn’t remain where I was. Despite having only a moment earlier contemplated leaving my seat, I tried to argue with him, telling him that there was plenty of room—what harm could it do that I was not in my assigned spot? But he was intractable; he ordered me to move, and waited as I reluctantly stood up and started making my way towards the girl.

Addressing her in French, I showed her my stub, which she studied as though she had never seen a train ticket before. The tears on her cheeks had dried and were impossible to make out if one didn’t already know that she had been crying. Her fingernails, I couldn’t help noticing, were short and square, as though she bit them regularly, and it seemed oddly appropriate that someone so beautiful should have such ugly fingernails. That was when she replied that she had been issued the same seat as me. Her voice was low and slightly hoarse. An error of the Deutsche Bahn—my father would have been delighted. I told her that if it were up to me she could remain where she was, but the controller had come by and hadn’t given me a choice in the matter. As I said this, I turned to point at him, but there was no sign of the man I had just argued with. For a moment I stared at the spot where he’d been standing. Through the sliding door I could see that he wasn’t in the next car, or in the car after that. It was beginning to look like I had invented him as an excuse to engage her in conversation. I was about to return to my seat (which wasn’t really mine) when I heard her ask me if I planned to stand there like that for much longer: I realized that she was inviting me to join her.

“You’re not French,” she said as I sat down across from her.

“No,” I said. On her lap was a copy of Blaise Cendrars’s Prose du Transsibérien.

“How did you know I was French?”

“Your book?” I said, pointing, and she laughed, though of course it hadn’t been the book, which until now I hadn’t noticed. I wanted to tell her that I had seen her crying earlier, that I had seen the tears streaming down her cheeks as I watched like a Peeping Tom through a gap in the seats.

“I don’t usually do this kind of thing,” she went on. “I had my ticket when I left for the station. Somehow I lost it, and I had no money to buy another seat. But then I told myself the controllers don’t always pass through all the cars . . .”

Maybe in France they didn’t. In Denmark, they went from one end of the train to the other with the ineluctability of a law of nature, even on regional trains.

She told me that she had just left Amsterdam, and I gathered that she had experienced some kind of heartbreak of her own there.

“Are you German, by any chance?” she suddenly asked.

“Something about the way you talk. You remind me of someone.” Then: “She was German.”

I told her I was coming from Copenhagen, she told me that she had just left Amsterdam (“’Dam,” she called it), and I gathered that she had experienced some kind of heartbreak of her own there—hence the tears. She told me her name and I told her mine. We talked some more. Any moment I expected Luce to return to her book, but that moment never came. She had just informed me that she was originally from the south of France and starting her first year of medicine at René Descartes, when I saw a railway employee coming from the opposite direction, and as the door slid open I saw that it was the same man I had argued with earlier. How had he managed to reach the other end of the train without walking through our compartment? Without thinking, I took out my ticket and passed it to Luce, shooting her an appuyé regard and nodding, as though to say, He’s behind you. The controller, who had by now reached us, asked to see our tickets. There was no inflection in his voice, nothing to indicate that he remembered our earlier exchange. I saw the hesitation in Luce’s eyes, but she couldn’t give me back my ticket, not in front of the controller. When the latter turned to me, I stood up and told him I had gotten on without a ticket. At that moment a female voice over the speaker announced the next station (Mannheim), and we started to slow down. Conversely, everything else sped up, as in a dream, and before I knew it I was following the controller out of the compartment. Only afterwards, sitting in another Thalys headed for Paris, did I think to myself that I should have asked her for a phone number, at the very least. I didn’t even know her last name. All I knew was that we were both headed in the same direction.

Excerpted from Paris Is a Party, Paris Is a Ghost by David Hoon Kim. Copyright © 2021. Reprinted with permission of the publisher, Farrar, Straus, and Giroux. 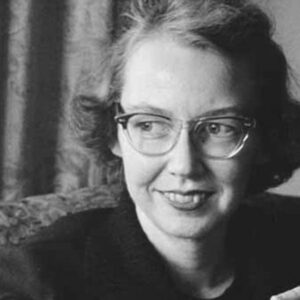 Is Flannery O'Connor's Complete Stories still the best ever National Book Award winner? Today is the 57th death day of Flannery O'Connor, sardonic queen of the Southern Gothic sub-genre (whose long-overlooked...
© LitHub
Back to top