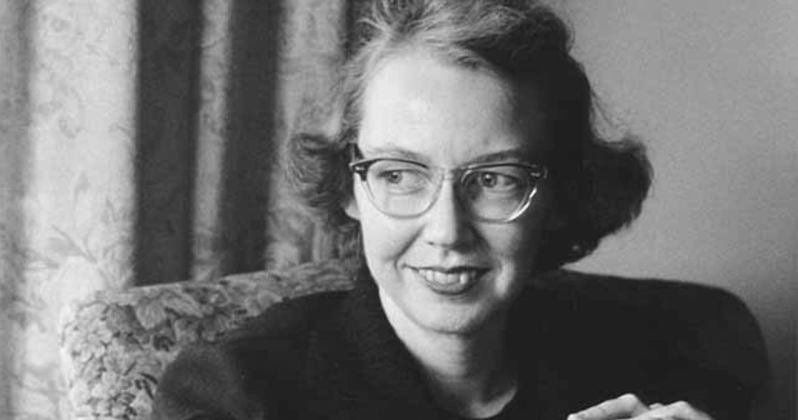 Today is the 57th death day of Flannery O’Connor, sardonic queen of the Southern Gothic sub-genre (whose long-overlooked racist tendencies have been more widely discussed of late), devout Catholic, and lifelong ornithologist.

O’Connor’s The Complete Stories won the 1972 U.S. National Book Award for Fiction (beating John Updike’s Rabbit Redux, Walker Percy’s Love in the Ruins and E. L. Doctorow’s Book of Daniel) and has, for over half a century now, been widely acknowledged as one of the greatest works of American literature of the 20th century. In fact, back in 2009, The Complete Stories was named the best book ever to have won the National Book Award for Fiction. In an online poll conducted by the National Book Foundation, O’Connor’s posthumously-compiled collection won out over pretty formidable field of finalists: The Stories of John Cheever, William Faulkner’s Collected Stories, The Collected Stories of Eudora Welty, Ralph Ellison’s Invisible Man and Thomas Pynchon’s Gravity’s Rainbow.

The problem with a poll of champions like this is that it doesn’t include the deserving and now-iconic titles that were, at the time, passed over for lesser works. To wit: James Baldwin’s Giovanni’s Room is better than Wright Morris’ The Field of Vision (1959), Vladimir Nabokov’s Lolita is better than Bernard Malamud’s The Magic Barrel (1959), Evan S. Connell’s Mrs. Bridge and Shirley Jackson’s The Haunting of Hill House are both better than Philip Roth’s Goodbye, Columbus (1960), Richard Yates’ Revolutionary Road and Joseph Heller’s Catch-22 are better than Walter Percy’s The Moviegoer (1962), Toni Morrison’s Sula is better than Thomas Williams’ The Hair of Harold Roux (1975), John Irving’s The Hotel New Hampshire is better than John Updike’s Rabbit is Rich (1982), Marilynne Robinson’s Housekeeping is better than The Collected Stories of Eudory Welty (1983), Toni Morrison’s Beloved is better than Larry Heinemann’s Paco’s Story (1987), Katherine Dunn’s Geek Love is better than John Casey’s Spartina (1989), and on, and on, and on…

But all that is just one man’s correct opinion and entirely beside the point. Twelve years on from that poll, my question to you, learnéd Lit Hub reader, is this: is Flannery O’Connor’s The Complete Stories still the best ever National Book Award for Fiction winner? Is there a recent novel or story collection, from the below list of heavyweight champs, that could pose a legit challenge to O’Connor’s title. More than one, perhaps?

You decide. And please, do feel free to sound off in the comments.