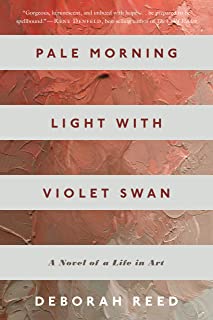 The following is excerpted from Deborah Reed's latest novel, Pale Morning Light with Violet Swans, a story about a famous abstract painter at the end of her life. Reed is the author of the novels The Days When Birds Come Back, Olivay, Things We Set on Fire, and Carry Yourself Back to Me. She has written two thrillers under the pen name Audrey Braun. She lives on the coast of Oregon and is the owner of Cloud and Leaf, an independent bookstore in Manzanita, Oregon.

The house settled abruptly. The Moonlight Sonata had taken over from Le cygne as if nothing had happened, even as Violet lay on the floor. She may have fainted. It seemed as if she’d been traveling for days and was relieved to find herself home.

Hanging plants swung like pendulums of asynchronous clocks above her head. Her paintbrush remained clutched in her hand, wide and heavy as a house painter’s, especially when wet. Her large plastic measuring cup full of paint had flung across the dropcloth, and the pale ochre coursed between folds of fabric near her head.

She struggled to sit up, swiping the brush across the floor and her smock and rolled-up blue jeans. She glanced around the loft for Em before realizing that Em couldn’t be in the house on the coast of Oregon where Violet had lived for the past seventy-five years. Em had never been here, or anywhere, since the fire. And yet the loss of her sister seared so deeply it was as if Violet had just received word. The left side of her body flushed with perspiration. The right, thickened by scars, remained cool and dry as ever.

The Emergency Alert System cut through the sonata on the radio. The tone was not a test. There’d been an earthquake, its epicenter fifteen miles inland. A 5.8 on the Richter scale. “Well, heck,” Violet said.

She’d never felt such a thing in her life. Her grandson, Daniel, worked as a film editor in Los Angeles, where earthquakes happened all the time. This was no way to live. She would tell him so the minute they spoke.

Her breath was thin, inadequate, her lungs tickled and pulled. The taste in her mouth was unpleasant, like the night of the fire when she’d stuck out her parched tongue to catch the icy snowflakes, but it was ash she’d caught, warm and chalky in her mouth. Maybe it hadn’t been snowing at all. Those days could be difficult to recall.

It didn’t help that the past had brushed so closely up against her, and continued to billow like gauzy drapes around the room.

It was important not to rise too quickly, not to get ahead of herself by jumping up before her heart could hoist fresh blood to her head. It didn’t help that the past had brushed so closely up against her, and continued to billow like gauzy drapes around the room. Little Em with sweaty curls and big-eyed joy, the shimmer of a moth’s coated wings smeared on her palm.

The landline rang until voicemail shut it off, and after that Violet was surrounded by heavy quiet before the ringing began again. Her trembling hands had calmed, but a swaying within her continued for a time that couldn’t be measured. Neither Francisco nor Penny appeared to be on the way up to see about her. Violet pounded the handle of her paintbrush against the wooden floor, to let them know, she supposed, that she was all right, though it could be read either way. She heard Francisco through the vents, calling for Penny. Penny was yelling something indecipherable from the direction of the backyard.

Another wave of dizziness, and Violet closed her eyes and thought of rain collecting in the barrel for the garden during the driest days of the year. She was suddenly greedy for summer, for the sound of bees tip-tapping the windows, the feel of reading on the porch while the air smelled of lavender and brine, the evening sun glowing rubescent and gold. She had already lived longer than most people, longer than anyone she’d ever known, and for years it seemed as if she might live forever.

She opened her eyes to tiny fissures in the lath-and-plaster ceiling, minor cracks added to others from the house forever settling into the ridge. A chalky film dusted her lips, and she brushed and spit it away, coughing again as if some of it had slipped down her throat, though she was certain it hadn’t. The line Richard was reading came from a poem that was written long after his death. There was no sense to be made. He had been gone for twenty years and she was still here, and this had always seemed the most unlikely thing to have happened.

She unfurled herself bit by tender bit, floating upward to stand as if rising from the depths of a dream. She made her way around tin cans and photographs thrown from the shelves. The shattered glass distorted the faces of people she loved—Richard, Ada, Francisco, Penny. But the one of Daniel as a boy at the beach was unbroken; the grin he still had to this day beamed up at her from the floor.

The composition of this life, its scale, shapes, and colors, gave way to interpretations that Violet didn’t always understand.

If the world was asking Violet to pay closer attention than she’d already paid, the world was asking too much. She’d spent a lifetime navigating her observations. Back to her ﬁrst pencil shavings and the scent of vanilla and sugar, her mother bak-ing and teaching Violet to write her name. Violet yearned for her mother even as she stood two feet away in their kitchen, with its grasshopper-green tiles and Dutch-orange bread box, her mother’s sheer yellow hem shifting with the swish of her hips. “Like this,” she said, stretching her arms into a giant V, before offering Violet a slice of lemon cake. The composition of this life, its scale, shapes, and colors, gave way to interpretations that Violet didn’t always understand. She held tight to everything, even in the middle of having it. She missed her father while listening to him beg Dolly, their hairy mule, to plow, today, if it would please Your Highness. When the scent of straw and dust reached Violet through their kitchen windows, she could see and feel the lines of pale umber, chalky reds, and blues of her father’s and Dolly’s work across the earth and up into the sky, and its beauty confused her. She made drawings of forks and shoes and her mother’s apron before she could spell her own name, and sometimes when she saw what she had done, she was moved in ways she didn’t understand, and she hid in the back of the barn to let loose her gulping tears.

The Book of Two Ways by Jodi Picoult, Read by Patti Murin 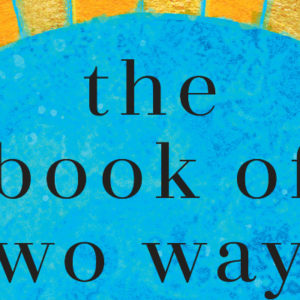 The Book of Two Ways by Jodi Picoult, Read by Patti Murin Every Monday through Friday, AudioFile’s editors recommend the best in audiobook listening. We keep our daily episodes...
© LitHub
Back to top