This weekend saw the release of Josephine Decker’s Shirley, which is being described in many places as a biopic of genius American writer Shirley Jackson, but, well, absolutely is not. Though Elisabeth Moss’s portrayal of Jackson is spectacular and sometimes uncanny (they nail those slightly off-kilter glasses), and while some of the most famous and passed-around elements of Jackson’s biography are represented—she was a witch, didn’t you know, and her husband, Stanley Edgar Hyman (here evoked savagely by a smarmy, superior, and manipulative Michael Stuhlbarg) had semi-sanctioned affairs—this film is closer to a folded, complex form of fan fiction, bringing in elements from Jackson’s life as well as from her writing. Mind you, this is not a complaint. This is where the film gets much of its magic, especially if you’re a fan of Jackson’s work, which at the very least means that you’ve read beyond the obligatory “The Lottery.”

After all, the film is not based on either of the biographies that have been written about Jackson—Ruth Franklin’s 2016 Shirley Jackson: A Rather Haunted Life being the definitive one—but a novel, a thriller by Susan Scarf Merrell, in which a young couple, Rose and Fred Nemser (who are completely fictitious), come to stay with Jackson and Hyman, and fall prey to their black magic, both figuratively and (possibly) literally.

So, all right, Shirley is already an adaptation of a work of Shirley Jackson fan fiction, but that’s just the first layer. Some elements that were true to life in the original novel have been written out (Jackson’s four children being a notable example; they are nowhere to be found in the film, perhaps to make emotional space for Rose’s pregnancy [Edit: it has been pointed out to me that it’s more likely because Jackson’s children are still alive, and could have sued for defamation]) and others have been shifted around, most notably the fact that despite Merrell’s novel being set in 1964, more than a decade after the publication of Jackson’s hallucinatory novel, Hangsaman, Decker’s adaptation dramatizes Jackson’s drafting of the novel, from the early stages to its completion.

In fact, Shirley seems to take almost as much from Hangsaman as it does from Jackson’s biography (though those two are certainly connected, as Franklin notes in her biography). Both Shirley and Hangsaman are, broadly, about a young woman’s mental disintegration in response to the controlling forces of others, particularly men. Both film and novel mirror the disintegration of their protagonists with formal techniques—the cinematography is claustrophobic and destabilizing, the camera often unsteady; it feels exactly how one of Jackson’s narratives translated to film should—that come to an almost surrealist head in the final third.

Hangsaman was reportedly inspired by the famous disappearance of a Bennington college student, Paula Jean Welden. In fact, though this idea is reinforced on the back of my Penguin Classics edition, Franklin says Hangsaman has nothing to do with the Welden case, and that this is a persistent myth about the book started by Judy Oppenheimer, Jackson’s first biographer; Jackson did use the Welden case in a short story, “The Missing Girl,” but it doesn’t line up with the events of Hangsaman at all.

The film, however, makes significant hay out of the supposed connection. “Disappearing college girl,” Stuhlbarg’s Hyman muses, “sounds trite and a bit trashy, but give it a go. I’ll read, of course, before you wade too far in?”  Shirley shows Jackson researching Paula, obsessing over her, lying on the floor and imagining the girl’s final weeks and moments, slowly turning her into a book, but getting more caught up in her narrative than seems healthy.

Indeed, at first, it seems like Shirley is going to be a film about Jackson’s own unraveling—Jackson begins to confuse Rose with Paula in the first 30 minutes—but it’s really Rose’s mind that someone should be keeping tabs on. From the beginning of Hangsaman, Natalie’s mind is trying to unpick reality—she imagines being questioned by a detective accusing her of murdering her lover as she stands in the garden of her parents house. It takes only slightly longer in the film for Rose’s mind to start turning in on itself. By the end, it almost feels like this has been Rose’s origin story, that she’ll be her own writer of disturbing tales in the sequel, her goal to educate and dismantle the next generation.

There are subtler connections between Shirley and Jackson’s writing too, which may be just a matter of a fan gleefully picking up breadcrumbs, but so be it.

Of course, things get muddled. When Moss’s Jackson writes about Paula talking to a man, and going off into the woods with him, it’s impossible not to imagine the scene, early on in Hangsaman, when Natalie, our narrator, talks to a man at her parents’ party and lets him lead her into the “little forest” where the trees are “dark and silent” and where some unexplained sexual act occurs, which Natalie forces herself not to remember. Later in the film, as her friendship with Rose grows, the person Jackson imagines running into the woods with Paula changes from a man to a woman, and again I am reminded of Hangsaman, only the end this time, Natalie in the woods with Tony, a girl who may or may not be coming onto her and who regardless is almost certainly hallucinated. (What happens to the girl in your book, Hyman asks Jackson. “What happens to all lost girls,” she tells him. “They go mad.”) This is a thrilling hypothesis, by the way, if you wonder how Jackson came to the ending she did.

In her biography of Jackson, Franklin writes: “Hangsaman can be interpreted in many ways, but on one level it is unmistakably a document of Jackson’s rage at her husband. The novel’s subtext—never far beneath the surface—is sexual danger, always invoked in code.” In her introduction to the Penguin Classics edition of Hangsaman, Francine Prose writes: “The dangerous power of awareness, quotidian social brutality, loneliness, and existential fear propel Hangsaman toward the edge of becoming a psychological thriller, rather like one of Patricia Highsmith’s, only less physically violent, funnier, more lyrical, imaginative, and interior.” Both of these descriptions could just as easily be applied to Shirley.

To return to the sexual danger briefly, there is a moment in the film where it seems Jackson and Rose might become lovers, which again seems to come more from Hangsaman, sometimes classified as a lesbian novel (although one of the lesbians would be imaginary) than from Jackson’s biography. Franklin writes that “although characters who may be lesbians appear more than once in her fiction, Jackson—typically for her era and her class—evinced a personal horror of lesbianism. It’s possible that the relatively extreme way in which she would later disparage lesbians reflects some repression on her part . . . but that is conjecture only.” Perhaps this is why the sexual tension between the two women dissolves before it can make sense of itself.

There are subtler connections between Shirley and Jackson’s writing too, which may be just a matter of a fan gleefully picking up breadcrumbs, but so be it. Chiefly The Hanged Man, of course, whose appearance in one’s Tarot indicates not death but transformation. Both Shirley and Hangsaman also include scenes of professors playing music for their classrooms, and feature a young, innocent woman trying to make friends with the mercurial wife of her English professor. There’s even an imagined death of the young woman’s lover, though in Shirley it’s at the feet of his sexed-up students. Then: “They talk about me in town,” Moss’s Jackson says, and I think of If We Have Always Lived in the Castle. How could I not?

There’s also the fact that the film ably mimics one of Jackson’s finest abilities as a writer: her way of distinctly—and often brutally—characterizing the different occupants of a room in what feels like an impossibly small number of words. Others have pointed out the brilliance of the film’s second cocktail party scene, in which Jackson pours red wine directly on her hostess’s sofa (the hostess is sleeping with her husband, to be fair), and then as the woman comes over, frantically trying to clean it up, and Jackson half-heartedly swipes at the stain, all the hostess can say is “No no no, don’t rub, dab!” Everything you need to know about Jackson, and the world she was forced to occupy, exists within.

I will say that the portrayal of Jackson’s writerliness is particularly delicious and delirious in Shirley. There are the usual scenes of balling up typed pages and throwing them away in disgust, but I laughed out loud at one drafting desk voice over: “Paula was seventeen and already disappointed; the dread of going to college—no. She was seventeen, an age that brought with it the possibility of a whole life ahead—fuck. That brought with it the stabbing nervousness that at any moment, her life would go horribly—fuck!” Later, her response to Rose asking whether the writing is going well is sheer perfection, though I’m not sure whether I completely approve of the inspiration for her novel being treated like a series of visions.

By the end of the film, I almost get the sense that Rose is Jackson’s imaginary friend, as Tony was Natalie’s—and yet it is Rose who “goes mad,” or perhaps “goes enlightened,” in a kind of transference. But ultimately, it doesn’t matter: none of the doubling and folding and repeating has to line up exactly in order to resonate. That’s how you know it’s art. These works resonate with one another, building on each other’s many pleasures to create something greater than any one alone. For that reason, while I do recommend Shirley, I also recommend you return to Hangsaman first, or soon after, for further transformation. 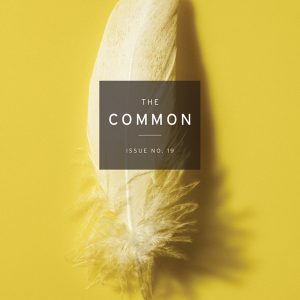 theater He spotted her slender body, whipped by the hot air, on the verge of being flattened by the wheels of the racing...
© LitHub
Back to top