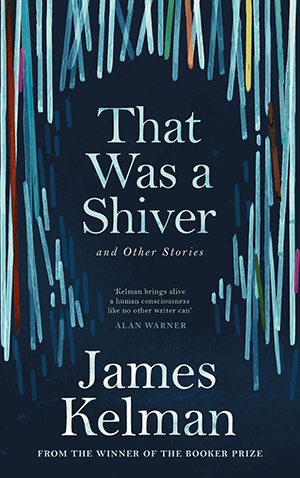 The following is from James Kelman's collection, That Was a Shiver, and Other Stories. The collection was shortlisted for the 2017 Saltire Fiction Book of the Year. James Kelman is the author of How Late It Was, How Late, which won the Booker Prize in 1994. His 1989 novel, A Disaffection, was shortlisted for the Booker Prize and won the James Tait Black Memorial Prize.

I had to do something new. My way of operating was not so old yet I seemed to have forgotten how to do anything else.

I didnay like that. My eyes kept closing too. I was not requiring to sleep, not thinking about sleep at all. Although it was in sleep the thoughts came. I didnay want these thoughts but I got them. And I could not care less if I was caught in the act. I had given up worrying about this months ago, several months ago, last year at least.

I looked for my diary.

It was round somewhere, roundabout—where? Reflections.

My diary, reflections. Also the usual aches; how come these aches all round my right ear itching and fiddling footering scratching and oh jesus the back side of the head; right side, and just aching, oh fuck. Finding myself in the same old situation was less than helpful. I needed something new and to hell with it.

But in a new form? No, I didnay think so. I didnt think at all, I didnt, just that, no, not such that I couldnay handle it, and readily, reserving my energy for the struggle itself, not the conditions toward it, setting them for what lay ahead, that was the danger, constant temptation similar to giving up, the concession to it oh god I could no longer just be here, and just being here.

Although I would be walking into the new place soon. I would be arriving there. So I would keep on. I would. This is not proper decision-making, only a function, continuing as a person.

I knew more was demanded. So what? I knew myself inside out. To be upright, the one deep breath, opening the eyelids to greeting the day. Extant, that was what I looked for, having become, become it: extanticity.

But the temptation oh god and to make it as a question: Why do my eyes close? No, I do not believe it; I do not accept it. All the time they were closing. So what? That is nothing, that is bloody nothing.

I wasnay supposed to sleep. I knew that I could, if I lay down and the scene had been set but how, how, colder, to sleep.

I didnt want even to be doing that, and if it was cold—colder, okay, then my eyes

From That Was a Shiver, and Other Stories. Used with permission of Canongate. Copyright © 2018 by James Kelman.

Lit Hub Daily: April 17, 2018 All the novels I almost wrote: brand new Pulitzer Prize-winner Andrew Sean Greer looks back at what might have been…...
© LitHub
Back to top