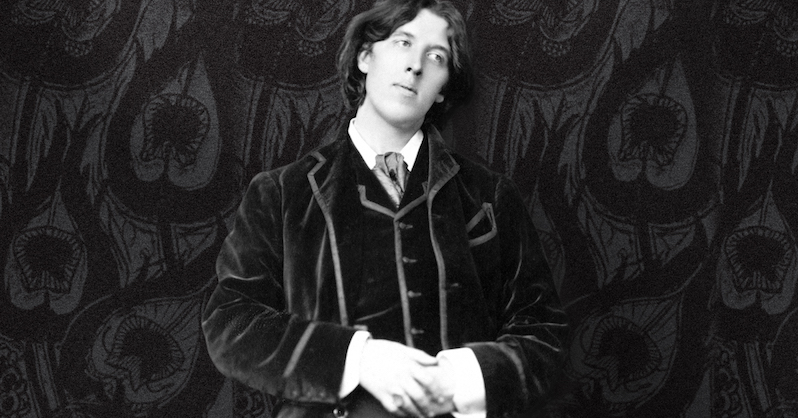 One of Oscar Wilde’s last stops in England before exile was a bookstore.

On May 18th, 1897, one day before Oscar Wilde would finish a two-year prison sentence for “gross indecency” with men, the author took a cab with two warders from Reading Gaol to wait for a London-bound train.

Were it up to the prison guards, they’d have transferred Wilde to Pentonville Prison without any kind of fuss. It was to be his last stop before freedom. But a laburnum tree was blossoming and Wilde, recalling the splendors of the outside world, shouted for joy. The warders hushed him. If he kept it up, people would realize who he was.

As Thomas Wright, author of Built of Books: How Reading Defined the Life of Oscar Wilde, notes, Wilde had described in a prison letter to his lover Lord Alfred Douglas a fear of “going out into the world without a single book.” There were plenty of reasons for an emotionally scarred social pariah to anguish over the life to come, but high on Wilde’s lists of concerns were the books he would seek for consolation.

Soon before he was released, Wilde had asked a close group of friends to purchase volumes for him, including his literary executor Robbie Ross. Among his requests were works by Gustave Flaubert, Charles Baudelaire, John Keats, Alexandre Dumas, and Dante, the writer who he could not live without.

Wilde walked through Pentonville’s gates early on May 19th and onto Caledonian Road, where his friends More Adey, an art critic, and Stewart Headlam, an ex-vicar turned socialist author, awaited. In a cab heading towards King’s Cross Station, Wilde wasted no time talking about books, Dante above all.

When the trio arrived at Headlam’s house in Bloomsbury, Wilde was greeted by some of those who cared for him most. He had a cup of coffee for the first time in two years, washed, changed, and laughed the morning away. For a man freshly out of prison, he was disarmingly chipper. Ada Leverson, Wilde’s friend and a novelist, later recorded that he’d walked in “with the dignity of a king returning from exile.”

The irony, of course, is that Wilde was preparing to go into the sad, brutish exile of his last years, outside of his home country. In the company of his friends, Wilde wrote an eager letter to a Jesuit mission nearby asking to take part in a six-month retreat. Biographer Richard Ellmann writes that as Wilde waited for the messenger’s return, he continued speaking with his peers about Reading “as if it had been a resort.”

Wilde’s request was promptly denied. Newly despondent, and with few things left to do, he ran last errands. Wilde had missed the early steamer to Dieppe, on France’s northern coast, and decided to stop at Hatchards, London’s oldest bookshop and Wilde’s favorite. As Wright notes, Wilde “wanted to make a few quick purchases, his very last on English soil.” He fled once a patron in the store recognized him, drawing the attention of other clientele.

Wilde crossed the English Channel by boat overnight and landed in Dieppe in the new pre-dawn. Ross and another friend, Reginald Turner, met their poor friend there. They took him to check into a hotel under the pseudonym “Sebastian Melmoth,” a name that implied Wilde was a wandering martyr.

When he opened the door to his room, Oscar Wilde wept. Not at his misfortune, but at what he saw in front of him. His friends had arranged a display of flowers, and a neat stack of books.