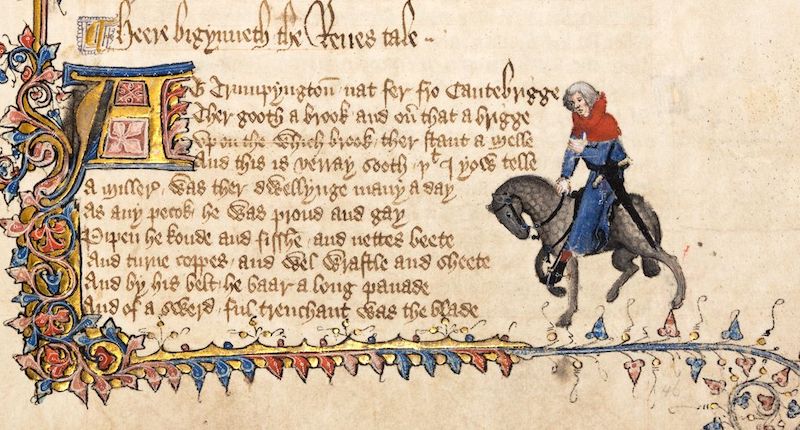 On the Various, Multipurposed Manuscripts of Canterbury Tales

The Canterbury Tales was written towards the end of Chaucer’s career and is perhaps his defining achievement. The poem is, however, apparently unfinished. The manuscripts of the Tales often differ in the number of tales they contain, and the ordering of the tales also differs. Although the poem survives in 92 manuscripts, of varying levels of completeness (some no more than fragments, others complete codices), no manuscript is in Chaucer’s own hand. A Google search for “Chaucer” and “manuscript” is likely to bring up the Ellesmere Manuscript held in the Huntington Library in San Marino, California; switch to Google Images, and you get a plethora of folio images in beautiful script.

The Ellesmere is handsomely produced—the writing is neat and upright, with elegant flourishes, and the leaves are decorated with fine border illumination. It has 22 images of pilgrims in its borders, including an iconic one of Chaucer himself. It would be wonderful to imagine this was a portrait of Chaucer taken from life, and that the author had overseen the production of the manuscript, but this is not the case. Nor does this expensive, star item give a true impression of the manuscripts of the Tales—manuscripts which are as diverse, messy, surprising, and delightful as the text of the Tales itself.

The scholars John Manly and Edith Rickert embarked on a project in 1924 to examine all the manuscripts of the Tales and produce an authoritative edition of the text. Hitherto every published edition had used particular manuscripts rather than examining them all. What they probably hoped to find was a definitive manuscript—perhaps not Chaucer’s own version, but something closely resembling one. They thought the project would last “several years.” In the end, it lasted for 16.

Their task was truly daunting. It required them to identify and photograph all the manuscripts, research their provenance, transcribe the texts, and compare each textual variant word for word. The variants were compared on 60,000 collation cards. Although dealing with large bodies of complex information was something they had experience with, from their time working as code breakers for the American War Department during World War I, the eventual eight-volume work exacted a heavy toll on them both.

Rickert died a few months before the first volume was published, and Manly died six months afterwards. (Predictably, Rickert’s work was undervalued then and still is today. In the introduction to the edition, Manly praised her for having a “woman’s capacity for enormous drudgery.” To this day, Manly has an entry in American National Biography, a compendium of biographies for over 19,000 notable figures from American history, but Rickert does not.)

The manuscripts of the Tales often differ in the number of tales they contain, and the ordering of the tales also differs.

Manly and Rickert’s task was made all the more complicated by the fact that after Chaucer died, he was put to many uses. The scribes who copied his work prodded and poked him, they squished him into moulds and fashioned him in their own image. A small, unglamorous manuscript held in the British Library exemplifies how this process was enacted. BL Harley MS 2382 is a small paper manuscript that was copied by a single unnamed scribe. Paper was, of course, a much cheaper writing material than parchment. The scribe wrote in a cramped, cursive script (meaning the writing is speedily “joined up”), and the manuscript is a plain thing. Its only decoration is the occasional use of red ink (for the underlining of rubrics, running titles, and highlights for the first letters of poetic stanzas).

The manuscript contains several texts, which are split up over the codex and crammed into the available space. One text breaks off midway and is followed by a new text before the scribe returned to copying the earlier one. The overall impression is one of economy and slightly haphazard planning. Manly and Rickert suggested that this was “a book which a country parson might have written for himself.”  Another scholar called it “a labor of love, evolving as the scribe worked on it.” Throughout the manuscript, the texts are glossed with heavily abbreviated Latin annotations. The annotations are written in a cramped and scrawled cursive script that is difficult to decipher, which probably means the scribe was producing this gloss either for himself or for a group of readers who were similarly Latinate.

Unlike the Ellesmere Manuscript, a showy parchment manuscript that may have been made for an elite patron, BL Harley MS 2382 appears to have been made by a scribe, probably working in a provincial location, who was making it for himself or for circulation amongst a group of friends or acquaintances. And it is different from the Ellesmere not only in its cost and appearance but also in the version of the text it contains. It is emphatically not a complete copy of the Tales, but instead a devotional compilation of religious and moralizing material. It contains a number of saints’ lives, devotional texts, and miracle stories as well as two other texts, labelled “Fabula monialis de sancta maria” (Fable of the nun of Saint Mary) and “Vita Sancte Cecilie virginis” (The life of Saint Cecilia the Virgin).

These two texts are in fact two of the tales from The Canterbury Tales—the ones we know of as the “Prioress’s Tale” and the “Second Nun’s Tale.” What is striking is that nowhere is Chaucer named as the author of these tales, and they have been stripped from their original context in the Tales as a whole. 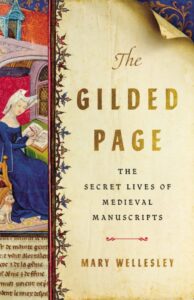 Excerpted from The Gilded Page: The Secret Lives of Medieval Manuscripts by Mary Wellesley. Copyright © 2021. Available from Basic Books, an imprint of Hachette Book Group, Inc.

Mary Wellesley is a former research affiliate at the British Library, where she still teaches medieval language and literature. A frequent contributor to the London Review of Books, she completed her PhD at University College London. She lives in London. 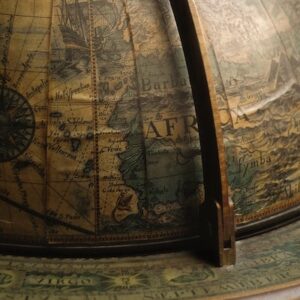 On September 23rd, McGill University announced the shortlist for the 2021 Cundill History Prize. Founded in 2008 by the late...
© LitHub
Back to top
Loading Comments...