Bethany Kaylor Digs Into the History of Doing It Yourself

Almost a year into the pandemic, the Do-It-Yourself dreams still linger, hazy and shimmering with promise. There’s an ineffable satisfaction in building with your hands, witnessing the transformation from an abstract idea to a physical form. More importantly, DIY projects offer an escape from the infinite maw of Zoom meetings that structure our waking hours.

But finding simple instructions for how, exactly, to build that slick plant stand or Amish-inspired coffee table can be overwhelming, especially if you’re a novice DIY-er who doesn’t know a hex nut from a flange nut. (Guilty as charged!) While turning to an instruction manual seems like a reasonable option, most folks shudder at the thought. I myself have cried no less than five times while clutching a cryptic IKEA manual, my would-be bed frame sprawled across the floor.

Despite their authority, many instruction manuals omit an author, as if the information suddenly appeared—poof!—in a deus ex machina moment. However mysterious their origin, though, documents, instruction manuals—which boom with godlike omniscience on matters from plunging a toilet to building an airplane or planning a city—are significant artifacts that reflect dominant cultural, political, and economic systems. As urban geographer Leslie Kern notes, the logic of a patriarchal society “operates on the unspoken assumption that… forms of power must first be optimized for white, straight, cis, able-bodied men.” Disappointing? Yes. Surprising? Not particularly.

Knowledge is a cultural production, determined and propagated by those who hold power. Instead of flipping through manuals and tossing them aside, it’s time to ask who is writing these instructions and for whom.

To find the godfather of instruction manuals, look no further than the German printer Joseph Moxon. In the late 17th century, he published Mechanick Exercises, a technical guide to printing in any language. The book contains step-by-step instructions on blacksmithing, engraving, mapmaking, and typography-setting. Although instruction manuals had existed for centuries, what rendered Mechanick Exercises revolutionary was its democratization of knowledge—it was written for the average literate schmuck.

While modern readers raised on a steady diet of YouTube tutorials and “For Dummies” books may not find this fact subversive, Exercises was a radical departure from the rigid social-political hierarchies of Western Europe. During the late Renaissance era, technical knowledge was concentrated within guilds and other professional societies, leaving a lacuna in the general public. Mechanick Exercises flipped this paradigm, empowering the public with specific, technical knowledge.

The American DIY ethos emerged centuries later during the Industrial Revolution. The expansive railroad construction post-Civil War connected industries from coast to coast, and advancements in manufacturing technology made the American economy a global envy. By the early 1900s, self-improvement became a moral imperative, a crucial step towards optimizing every American worker’s potential. In a society fueled by industrial capitalism, free time (previously for leisure) was now viewed as a commodity to be aligned with market fluctuations. Instruction manuals began to advertise how to gain skills “in no time at all!”

Of course, there was a catch—the majority of instruction manual authors were male, and they were “producing knowledge” for an average male reader. Self-improvement literature for women consisted mostly of conduct books wherein male authors pathologized female behavior and psychology under the guise of “objectivity.” It doesn’t take a wild imagination to wonder why: the first wave of feminism—the suffragette movement and the fight for birth control—revealed how threatening female power was to a patriarchal system. Excluding women from technical and cultural knowledge, meanwhile, worked to preserve male economic power.

However, the exigencies of the World Wars and the Great Depression transformed the gendered norms of American culture. Labor scarcity ushered women—both white and Black—into shipyards, munition factories, and aviation industries, where they worked in positions previously reserved for men. Even Girl Scouts participated in wartime efforts, gathering peach pits as filters for gas masks. Through government propaganda, Rosie the Riveter became the paragon of womanhood. There was even a song written for her: “All day long whether rain or shine, she’s part of an assembly line, she’s making history, working for victory!” No longer subversive traits, female independence, technical knowledge, and physical strength became bright hallmarks of patriotism.

This new brand of patriotism extended beyond factory lines into women’s homes. Homemaking magazines like Good Housekeeping and American Home encouraged female readers to become “Mrs. Fixit.” One contributor wrote, “There is quite a bit of satisfaction in being able to… put new washers in leaky faucets or replace burned-out fuses without calling for male assistance.” Masculine absence, it seemed, made female resilience necessary. A 1945 column of Good Housekeeping reads: “Our new son needed a sled, and as his Daddy was busy in Uncle Sam’s Army, it was up to Mother.” Stripped of their machismo, building and repairing became normalized tasks for the average Jane.

Alas, this newfound empowerment was short-lived. In the post-war years, suburbanization and the glorification of the WASP nuclear family marked a return to patriarchal gender norms. The language of instruction manuals codified this trend. In a 1950 Good Housekeeping article explaining how to build a barbeque, the author provides step-by-step instructions on how to mix mortar but ends with a caution to female readers: “If you’re all thumbs, by all means beseech, shanghai, or just plain hire a man to build one for you.”

Rather than wield a welding torch, women were encouraged to wallpaper and reupholster furniture. More intensive tasks, such as fixing a faucet or building a sled, were deemed signs of virulent manhood, prerequisites for the Handyman Dad. The once-beloved Rosie the Riveter had disappeared, replaced by the perfectly coiffed Stepford wife.

The imagery of instruction manuals also reflected the cultural milieu. During the war years, manuals and tool advertisements featured manicured hands performing hard labor, such as instilling faucets or framing walls. In the suburban housewife era, they almost always featured men in the foreground, gripping a chainsaw or socket wrench. Women (if pictured at all) were in the background, hanging picture frames or plucking weeds from the garden.

From this market shift, a new genre of DIY literature emerged. Female authors—mostly self-taught builders, plumbers, and fixers themselves—wrote technical repair books, especially for other women. Unlike their historical predecessors, the language in these manuals was personal and conversational, like one friend speaking to another over coffee. The authors wove technical instructions with personal anecdotes; they anthropomorphized tools (such as comparing a water heater to a coffee thermos); they cracked the occasional sexual innuendo (mostly involving stud finders).

Because mainstream DIY literature adopted heteronormativity, many lesbian and queer builders turned instead to grassroots publications like Pride and a Paycheck and Tradeswomen: A Quarterly Magazine for Women in Blue-Collar Work. In addition to dispensing technical building advice, these magazines also provided resources for fighting sexual harassment and homophobia at work and in local neighborhoods.

Whether mainstream or alternative, female authors almost always situated their texts in response to a sexist, patriarchal culture. In the preface to Dare to Repair: A Do-It-Herself Guide to Fixing (Almost) Anything in the Home, authors Julie Sussman and Stephanie Glakas-Tenet wrote: “We’ve broken through glass ceilings—we just never learned how to fix them!” They challenged their female readers to raise the bar and “dare to level the washing machine that’s been rockin’ and rollin’ for months.”

This linguistic style marked a radical power shift in information design. Rather than adopt the male intellectual tradition of “objectivity” and “neutrality,” female authors acknowledged the roles their gender, race, and sexual identities played in organizing and communicating information. Many identified the fear and uncertainty of trying a new skill: “Just holding a five-pound vibrating saw in your hands for the first time can be unsettling,” one manual reads. It’s hard to imagine a Subaru or IKEA manual exuding such empathy for its audience.

In the current era of fourth-wave feminism, the politics of instruction manuals continue to evolve. In the introduction to her 2020 book Girls Garage: How to Use Any Tool, Tackle Any Project, and Build the World You Want to See, builder Emily Pilloton writes about her experience as a biracial woman in the trades industry.

“Who you are is not separate from what you build or why,” she notes. Throughout the text, she threads technical knowledge with personal essays, historical tool facts, and playful illustrations.

“I wanted the tools and materials to feel like characters in a story,” Pilloton says. While conversational in tone, Pilloton’s manual (and others like it) is just as technical and precise as any dusty manual in your glove compartment.

Authorship matters, especially when it comes to the codification of knowledge. From crash-test dummies to countertop heights to Siri voice recognition, almost every aspect of our modern life is designed for the average male body simply because their instructions were designed by—drumroll, please!—men. To put it plainly, “gender affects the type of questions we ask,” as journalist Caroline Criado Perez writes in Invisible Women. Whether masked as “neutral” or explicit in their biases, instruction manuals inevitably reflect the politics of their authors.

But never despair, dear reader. Your journey begins now. As you bumble through your DIY adventures, thumbing through instruction manuals and doom-scrolling through YouTube tutorials, consider who is giving instructions and just how they acquired such authority. Remember that power confers objectivity, which is really just a big ole farce designed by mostly (white) men. And try not to lose any screws.

Bethany Kaylor is a writer in the Bay Area. She writes essays and short fiction, which can be found at Salon, CrimeReads, Mid-American Review, DIAGRAM, and elsewhere. She cooks lots of beans and pets lots of dogs. 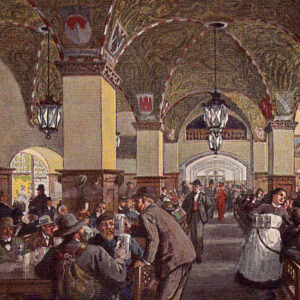 In August 1944, the internationally best-selling German author, Hans Fallada—born Rudolph Ditzen—was sent to a Nazi psychiatric...
© LitHub
Back to top