On the Undeniable Lure of the Historic Literary Home

Greenway is an 18th-century house that stands amidst sloping gardens and woods, overlooking the River Dart in Devon, England. In its time it has been the property of seafarers, mining magnates, a member of Parliament, and the world-renowned crime writer Agatha Christie; nowadays, it is owned by the National Trust, which opens it up to the public. Houses—stately or not—have always struck me as exciting places to begin thinking about and planning stories, and it was a brief visit to Greenway, back in 2010, that inspired my latest novel, The Whispering House.

Agatha Christie fell in love with and bought Greenway in 1938, occupying it until her death in 1976, and it’s her mid-20th century version of the house that the National Trust has put on display. Books are placed askew beside sofas and beds, as if they have just been set aside, walking sticks and hats are ready for use beside the front door, and there are shelves filled with curios that the well-travelled Christie brought back from all corners of the world.

On my summer holiday visit, 11 years ago, it was the library that struck me as Greenway’s most thought-provoking room. During World War II it was used as a mess room by members of the US Coastguard, who requisitioned the house in advance of D-Day, and one of the men, a professional artist named Lt. Marshall Lee, painted a frieze around the upper parts of all four walls. The frieze was, and is, a striking sight, depicting the soldiers’ eventful journey to England, which began in Houston, Texas and culminated with their arrival at Greenway. It mixes oddly with the otherwise restrained, period character of the room, but there is something wonderful about the oddness, like musical notes in a clashing chord. It got me thinking about the multiple layers of history that many—if not most—rooms contain within themselves, even if these layers are rarely as conspicuous as the ones in Greenway library. Agatha Christie herself obviously enjoyed the dissonance: when the house was returned to her in 1945, and the US Commander offered to have the frieze painted over, she refused, declaring it an “historic memorial” and professing herself, “delighted to have it.” 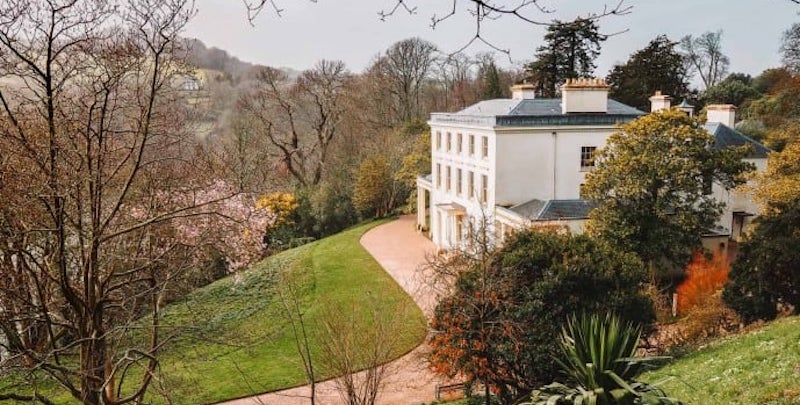 The Greenway estate, once owned by Agatha Christie.

I think it’s this sense of a history that’s only just out of reach—a mere breath away from the present moment—which draws writers like me back, again and again, to the haunted house trope. At their best, haunted house stories offer so much more than a cheap thrill; they can be an exciting way to explore the mysteries of human nature and the secrets that people hide. Curated properties like Greenway are full of the traces of such mysteries, filling the rooms to the brim with interwoven stories: large, public ones (for example, the build-up to D-Day) and small, private ones (who exactly was this artist, Lt. Marshall Lee?).

Presumably it’s because Agatha Christie occupied the house and set several of her own stories there (Dead Man’s Folly and Ordeal by Innocence among others) that my subconscious made the connection between Greenway and menace, right from the start.

Eighty miles west of Greenway, on the rugged coast of Cornwall, stands another famous literary house. I, along with every other devotee of the modern gothic novel, would dearly love to explore it, but Menabilly is not open to the public, so maintains its mystique.

In 1926, Daphne du Maurier stumbled upon it by chance during a walk, and she fell head over heels in love with its dilapidated grandeur and encroaching woods. Menabilly became Manderley in her most famous novel Rebecca; fittingly enough, it was the proceeds from Rebecca that allowed du Maurier to fulfil her longstanding obsession to restore Menabilly and move in. She and her husband rented the house for 26 years, between 1943 and 1969, at which point it was handed back to the Rashleigh family, who had owned it since the mid-sixteenth century, and continue to own it to this day.

Rebecca always strikes me as the ultimate haunted house story, because it chills its readers to the bone without requiring any suspension of disbelief. There’s no need for any clanking chains or figures walking through walls: the first Mrs de Winter is dead, yet she is absolutely present in Manderley’s day-to-day rituals, in the way it looks and feels, and in the minds of the people who live there. Novelists are always looking for oblique ways in which to reveal character, and a house can provide an invaluable means of achieving this end. If Daphne du Maurier had written, plainly, “Mr de Winter has a secretive personality,” we might not feel especially intrigued; instead, she shows us his attitude to Manderley—his obsessive avoidance of the west wing, with its stunning sea views, for example—and makes us want to know more.

Whereas I’ve only seen Greenway once, and Menabilly not at all, I have visited the Brontë Parsonage museum in Haworth, Yorkshire, many, many times. Alongside Greenway and Menabilly, which both have pretensions to grandeur, Haworth Parsonage seems relatively small and stolid, and yet of all the literary museums I’ve ever visited, it always seems the most intimately and excitingly alive. Maybe it’s because The Brontë Society is so old (it was founded in 1893, and an affluent benefactor, Sir James Roberts, gifted it the house in 1928), or because such a wealth of artifacts has been preserved and put on display—either way, stepping though that front door always feels like the closest thing I’ll ever get to traveling through time. When I leave—having seen the dining table where the three sisters wrote and read aloud, and their clothes and shoes, and their pens and ink bottles, and the tiny, hand-sewn books that they created in childhood—not only do I feel the need to write, I also feel inspired to follow the sisters into the dark, intense and gothic places where they set their novels. 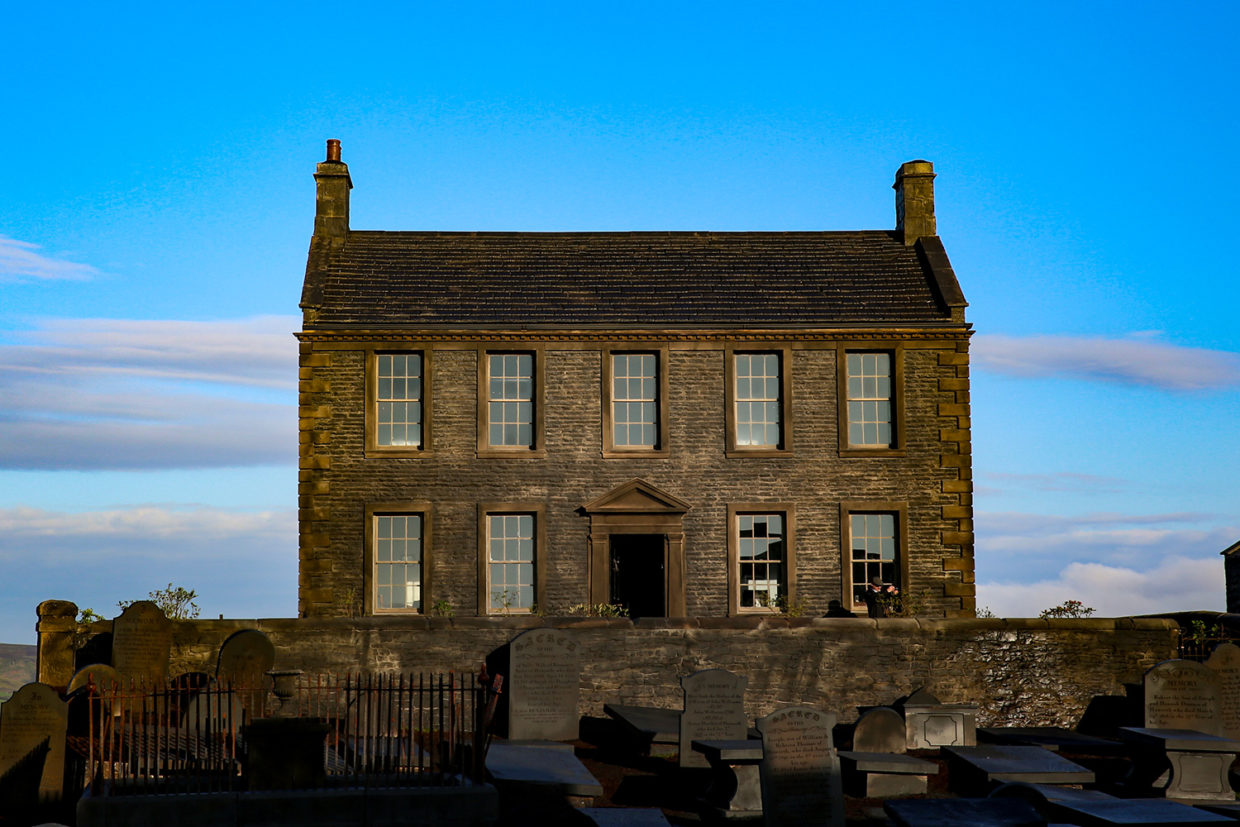 The house depicted in my own novel owes a great deal to Jane Eyre’s Thornfield Hall, not least because the attic, though rarely visited by the main characters, is the story’s focal point. Charlotte Brontë enjoyed the narrative allure of the attic, featuring it as a ghostly and uneasy setting not only in Jane Eyre, but also in Villette, where Lucy Snowe encounters a spectral nun in the attic of Madame Beck’s school.

In 1839, when Charlotte was in her early twenties, she visited a stately home in North Yorkshire called Norton Conyers. During her stay she was shown up a hidden attic staircase, to a remote, north-facing room with a small gable window, where a mentally ill woman known as “Mad Mary” was said to have been confined during the 1700s. It would be another seven years before Charlotte wrote Jane Eyre, and she no doubt drew her inspiration from many varied sources, but ‘Mad Mary’ surely sowed the seed for the character, and incarceration, of Mr. Rochester’s wife, Bertha.

At Thornfield Hall, as at Norton Conyers or any stately home, the attic is effectively out of bounds, and there’s nothing odd about that. You would not expect the attic rooms of a grand house to be open to guests. Attics are dusty, disused, liminal spaces where junk may be stored, or servants quartered in the cramped rooms.  It’s not the fact that the attic is off-limits that raises the hairs on the back of the reader’s neck, but the sense that there’s something—or someone—up there, that shouldn’t be. Something untoward that is in the house, but not quite of the house.

Greenway, Menabilly, Manderley, Haworth Parsonage, Norton Conyers, Thornfield Hall: all these houses are alive with untold stories, from the small mysteries that every single one of us keeps for the sake of privacy, to the darkest and most soul-destroying of secrets. Houses, much like people, have a public and a private identity, and whether they come across as friendly, sinister, intimidating or unassuming, there’s bound to be a gap, even if it’s only slight, between the self on show and the self behind the scenes. As long as this gap exists, it seems safe to predict that novelists will be drawn to explore it.

“Moonlight can play odd tricks upon the fancy,” says the young narrator of Rebecca, recounting her dream of Manderley in the opening chapter. “As I stood there, hushed and still, I could swear that the house was not an empty shell, but lived and breathed as it had lived before.” 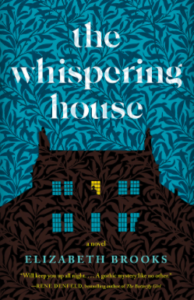 The Whispering House by Elizabeth Brooks is available via Tin House.

Elizabeth Brooks is the author of the novels The Whispering House and The Orphan of Salt Winds. She grew up in Chester, England, graduated from Cambridge University, and resides on the Isle of Man with her husband and two children.

Wendy Lower on the Political Power of Photography 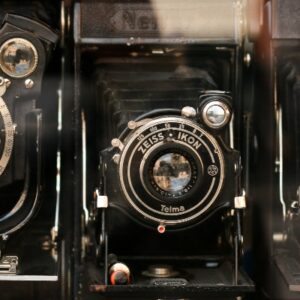 Wendy Lower on the Political Power of Photography