Why Do So Many Cold Cases Go Unsolved?

In 1996, a young couple—Julie Williams and Lollie Winans—were brutally murdered while backpacking in Shenandoah National Park. The case quickly became front page news nationwide; that media attention only intensified five years later, when Attorney General John Ashcroft announced that not only had an individual been indicted in the case, but that that person would be the first to be tried under new federal hate crime legislation. A few years later, the case against that man, Darrell David Rice, was quietly dismissed.

In her new book,Trailed: One Woman’s Quest to Solve the Shenandoah Murders, investigative journalist Kathryn Miles details both the crime itself and her multi-year reexamination of the case. That deep dive includes hundreds of interviews with investigators, forensic psychologists, survivors, family members and more. In this exclusive excerpt of Trailed, Miles travels to one of the leading forensic crime conferences in the country to learn more about why so many murder cases continue to go unsolved.

The American Investigative Society of Cold Cases is the brainchild of Ken Mains, a veritable celebrity in the true crime world. A former marine intelligence operative turned cop, Mains made a name for himself first working as an undercover FBI narcotics agent and then as the progenitor of one of Pennsylvania’s first cold case squads. In 2013, while investigating an unsolved double murder, Mains became, in his words, “stuck.” “It is a detective’s worst nightmare,” he writes in his memoir, Unsolved No More: A Cold Case Detective’s Fight for Justice. “It is a horrible feeling. You feel lost, desolate, failed and alone. I felt I had nowhere to turn for help because no single person or group entity had invested the time and passion I had into the case.” Mains is also a sports fan. He decided that what he needed to break open his stuck case was the criminology version of a dream team. And so he contacted the world’s best detectives, forensic psychologists, crime scene investigators, DNA experts, and more.

By 2013, they had become the board of Mains’ organization, the AISCC. Together, he and his board have advised on over one hundred cold cases, including high-profile murders like those perpetrated by California’s Zodiac Killer. Along the way, Mains has been an unflinching critic of homicide investigation in the country and one of the first to call attention to the ways in which an inability to account for bias has led both to wrongful convictions and unsolved crimes. It’s become his life’s work, which he’s tackled with a series of television shows and books. I’d watched several of the former before the conference. Depending on the situation, Mains can look like a Hell’s Angel or a geeky A/V enthusiast. That morning, as he kicked off the conference, he appeared somewhere in between. A blue sport coat hid Mains’s impressive collection of tattoos; he’d trimmed his beard and slicked his hair back into a tiny ponytail.

Currently, at least 250,000 active murder investigations in the United States don’t just remain unsolved; they have also gone cold, which is to say that they are no longer being investigated.

In addition to law enforcement, the audience that day comprised a number of surviving family members. Even in the second row, with my back to most of the audience, I learned very quickly that the bereaved are easy to pick out by the raw emotion in their voices and the gut-wrenching specificity of their questions Yes, but what if he stabbed her sixty-five times in the chest? Or But what if she had already taken out three restraining orders and he was still showing up for the kids? Regardless of what brought them there, each of the audience members sat spellbound as a parade of international experts worked their way through digital presentations and grim statistics. The only reprieve was the pervasive graveyard humor: the last slide of a presentation made by a forensic psychologist, for instance, read thank you for not vomiting.

But for all the attempts at levity, the news delivered by these keynote speakers was sobering. Currently, at least 250,000 active murder investigations in the United States don’t just remain unsolved; they have also gone cold, which is to say that they are no longer being investigated. Every presenter at this conference believed that figure is actually much higher—and that it doesn’t even begin to account for the number of cases in which an innocent person has been found guilty. The national trend for all violent crime investigations is just as concerning.

Despite huge advances in technology and investigation techniques, the murder clearance rate is still dropping: In the 1950s, the overwhelming majority—nearly 70 percent—of murder cases led to an arrest and conviction. Today, murder clearance rates are as low as 30 percent in some areas. According to studies completed by the International Association of Chiefs of Police, the NPS has the lowest clearance rate among law enforcement agencies nationally.

One big problem, Mains told me during a break, is the lack of resources for law enforcement. “Again and again, cold case leads don’t come in while new cases build up,” he said. “Eventually, a detective has to tend to those other cases, so the cold ones go into a drawer and then a vault.” Once those cases move off a detective’s desk, said Mains, it’s really hard to get any attention for them. As a result, the overwhelming majority of cold cases will never result in a conviction. But there are also advantages to a cooling-off period, and time can work to an investigator’s benefit. “Loyalties and allegiances change over time,” Mains said. “We think differently as we age. Cold case detectives can use that to their advantage.” Sometimes what a case needs more than anything is a changing of the guard—a handoff from one investigator to the next.

“Skepticism is also a powerful weapon,” added Mains. “Far too often, investigators who have worked a case for a while will become entrenched in their own theories. As a result, they’ll literally funnel every new piece of evidence through their account of the crime. And if a piece of evidence seems to call that theory into question, they’ll downplay or even disregard it.” It’s a phenomenon known as confirmation bias—as humans, we are predisposed to favor any information or opinion that affirms our preconceptions. In the world of homicide investigation, confirmation bias can cause investigators to explain away evidence or refuse to have it tested, so certain are they that it will not help solve the crime.

In the Cary Stayner case in Yosemite, for instance, the FBI investigators focused almost exclusively on the theory that Carole Lund, her daughter, and the friend were killed by a loved one, because statistically that is usually the case. When that didn’t pan out, they focused only on those employees of the lodge who had criminal records. Because Cary Stayner did not, he was cleared. In the meantime, Stayner went on to kill his fourth victim.

Scholars have only recently begun to understand just how widespread confirmation bias has been in thwarting justice, particularly for the victims of violent crimes. A recent study found that 80 percent of all wrongful convictions occurred because of demonstrable confirmation bias on the part of both investigators and prosecutors. This bias included everything from misjudging witness reliability to preventing laboratory testing of evidence—what researchers say is nothing short of a complete breakdown of logic and inquiry.

And, said Mains, confirmation bias can be especially pernicious because it often occurs at such a subconscious level that the experts don’t even realize it’s happening. New eyes—even amateur eyes—are an important corrective for that kind of bias, said Mains. I asked him what he would recommend someone like me do. “Start at the beginning and investigate the case all over again. Assume they got it wrong the first time,” he said, finishing his coffee. “Doubt leads to inquiry. And inquiry leads to the truth.” 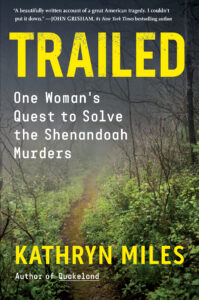 From Trailed: One Woman’s Quest to Solve the Shenandoah Murders. Used with the permission of the publisher, Algonquin Books. Copyright © 2022 by Kathryn Miles.

Kathryn Miles is an acclaimed journalist and writer-in-residence for Green Mountain College, as well as a faculty member for Chatham University’s MFA program. With a B.A. in Philosophy from St. Louis University and a PhD in English from the University of Delaware, Kate is also a scholar-in-residence for the Maine Humanities Council and a member of the Terrain.org editorial board. Her work has appeared in Best American Essays, Popular Mechanics, Outside, and The New York Times.

Vivat, where I work as a publicity manager, is one of the largest publishers in Ukraine. In pre-war times, it published...
© LitHub
Back to top
Loading Comments...