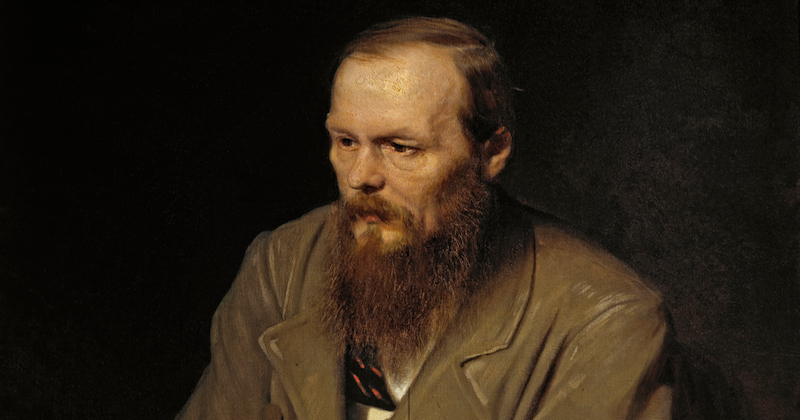 On the terrifying hoax execution that haunted Dostoevsky’s writing.

Today marks 141 years since the death of Fyodor Dostoevsky, who died of a pulmonary hemorrhage at age 59. But for a terrifying month, Dostoevsky anticipated a very different death date: December 22, 1849, before Crime and Punishment, before The Idiot and The Brothers Karamazov, when he was sentenced to death by Tsar Nicholas I. When the execution was canceled at the last minute, Dostoevsky was relieved—only to later learn the execution was a hoax the whole time.

Dostoevsky had been sentenced to death by firing squad for participating in the Petrashevsky Circle, a liberal discussion group accused of conspiring against the Tsar. Dostoevsky, 27 at the time, was convicted of: listening to stories criticizing the armed forces; owning an illegal printing press in order to create anti-government propaganda; contributing to a plot against the Tsar; and reading aloud an outlawed letter containing criticism of the Orthodox Church and the Tsarist government. (You know, classic dissident behavior.)

On the day of the execution, Dostoevsky and 21 other members of the Petrashevsky Circle were forced to kneel and kiss the cross, then undergo a symbolic beheading where swords were broken above their heads. Then they were tied to pillars in the town square and blindfolded, awaiting execution. But immediately before they were to be shot, an envoy from the Tsar arrived with a stay of execution, and the men were instead sentenced to four years of hard labor in a Serbian labor camp.

Dostoevsky rejoiced at the averted execution: “Why, didn’t I face death for three-quarters of an hour today, live with this thought in my head, was I not a hairsbreadth away from death, and now I am living again!” he wrote his brother Mikhail hours after the event. “I am being reborn in another form.” But it turns out, the whole event was pre-planned by the Tsar; the Tsar had pardoned them the day before, and the last-minute reversal of the execution was a purposeful act of psychological torture designed to strike fear—and then gratitude—in the hearts of his subjects.

This traumatic event stuck with Dostoevsky: he wrote to Mikhail, “When I turn back to look at the past, I think of how much time has been wasted, how much of it lost in misdirected efforts, mistakes, and idleness, in living the wrong way; and, however I treasured life, how much I sinned against my heart and spirit—my heart bleeds now as I think of it. Life is a gift, life is happiness, each minute could be an eternity of bliss.”

This same idea appears later in Dostoevsky’s fiction: in The Idiot, Myshkin tells of an acquaintance who was sentenced to be executed, then pardoned, and yet struggles to recover. Myshkin is asked, “Whatever happened to the friend who told you all his horrors? . . . His punishment was changed, which means he was granted that ‘infinite life.’ Well, what did he do with so much wealth afterwards? Did he live ‘reckoning up’ every minute?” Myshkin’s response: “He didn’t live that way at all and lost many, many minutes.” Myshkin returns to the anecdote throughout the book—much like Dostoevsky’s repeated attempts to synthesize the horror that happened to him.