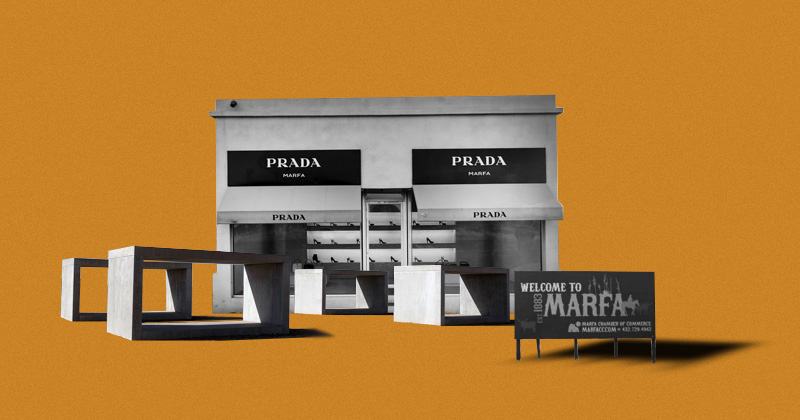 I used to think Marfa was a kind of practical joke that West Texans were playing on cultural elites. It’s remote even for Texas. The nearest airports are in El Paso and Carlsbad, New Mexico, each 200 miles away. The landscape is okay if you like scrubby hills and plains of yellow grass. And yet aesthetes come from all over, lured by the minimalist vibe the place embodies.

Whenever I’m in Marfa I feel like I’m in a Twilight Zone episode and something really strange is about to happen. One winter evening, when Roberta and I passed through town on our way to Big Bend, we saw a skunk sauntering down the sidewalk of the main street. He had the place all to himself. He affected an air of proprietorship as he navigated past the Hotel Paisano, where James Dean, Rock Hudson, and Elizabeth Taylor stayed in 1955, when they were filming Giant. During a classic West Texas hailstorm, Hudson and Taylor raced around with buckets to catch ice for their Bloody Marys. We lost sight of the skunk as he approached the pink wedding-cake courthouse in the center of town.

That night we drove east of town on US 67 to see the Marfa Mystery Lights. Against the shadowed outline of the Chinati Mountains, odd yellow and white lights darted about, merging and dividing, disappearing, then reappearing seconds later in a different spot. They

seemed to be dancing, which added to the air of enchantment. There have been numerous explanations—gas from petroleum deposits, optical illusions, electrical discharges from crystal formations—the most plausible being that they are reflected lights from the highway. James Dean was reportedly so fascinated by them that he bought a telescope. Your perceptions of what is real or at least normal get tested.

The artist Donald Judd rented a house in Marfa in 1971, “due in part to the harsh and glib situation within art in New York and to the unpleasantness of the city,” he wrote. He was also on the run from any form of government, and far West Texas was as close to anarchy as he could get. “I chose the town of Marfa (pop. 2,466) because it was the best looking and the most practical,” he wrote.

He wound up buying an abandoned army base that had been a detention center for German prisoners of war. There were a number of barracks and two massive brick sheds that had been used to repair tanks and artillery pieces. Judd filled the sheds with rectangular aluminum boxes of the exact same dimensions, differing only in the ways in which they are subdivided. One box is bisected by a vertical panel, another by a slanted panel at a 60-degree angle, and so on—a hundred geometric variations on a single theme. The glare off the boxes made it difficult to see inside; it was like looking at water through the reflection of a bright afternoon.

Judd noted that as an artist he was primarily interested in space, and he designed this immaculate environment to eliminate the distraction of color or whim. He claimed to have invented the concept of an “installation,” by which he meant the use of an entire room to present his concept. The rectangular theme of the boxes was echoed in the etched-concrete floor, the coffered ceiling, the windowpanes, and even the weathered bricks. Looking through the windows at the bleached-out field, one sees larger, concrete boxes replicating similar choices. They are well made and dignified but also look like leftover shipping containers.

Roberta adores Donald Judd. “I appreciate the spareness and severity of the lines in concert with the spareness and severity of the surroundings,” she explained, as we wandered among the concrete boxes outside in the blinding sunlight, which Roberta called “an essential part of the art.” She was so caught up she didn’t notice the shimmering whipsnake sliding through the grass at our feet.

“. . . WWDJD? What Donald Judd would do was a question I had never asked, but the Marfans were deeply interested in the answer.”

I admired the exactness of Judd’s enterprise, although it was hard to square his fixation on order with his anarchic politics, or the cultish following that has sprung up in the two decades after his death. When we checked into our hotel, there were Donald Judd books for sale at the front desk, and even bumper stickers asking WWDJD? What Donald Judd would do was a question I had never asked, but the Marfans were deeply interested in the answer.

We walked over to the new Robert Irwin installation, a U-shaped building. One wing is painted black, the other is white, and they are transected by scrims that filter the light. Rectangular windows at specific intervals admitted trapezoidal patches of sunlight onto the concrete floor. Through the windows I could see farmsteads and telephone poles. Doves were cooing. A piece of tin roof was flapping in the breeze. I wondered what art even was. Donald Judd in 1986:

A definition of art finally occurred to me. Art is everything at once. Insofar as it is less than that it is less art. In visual art the wholeness is visual. Aspects which are not visual are subtractions from the whole.

A painter friend of ours in Marfa, Julie Speed, bought the old jail and turned it into her studio. While she and her husband, Fran Christina, the former drummer with the Fabulous Thunderbirds, were renovating the place, Fran jackhammered out a portion of the wall, which was 14 inches thick. “He came in all covered with cement dust,” Julie recounted. “He told me he had found a leg bone in the wall.”

Julie insisted that it must be a deer tibia and that Fran was confused.

Julie speculated that since the walls were poured around 1917, the leg might have belonged to a US cavalryman in General Pershing’s army, which was chasing Pancho Villa at the time. Perhaps the soldier got shot in the leg and it had turned gangrenous and had to be sawn off, she suggested. “They are about to bury it, but then someone remembers, hey, they’re pouring cement for the new jail today, so let’s throw the leg in there so the coyotes don’t dig it up.”

She consoled herself with this thought as Fran buried the leg, reciting some Latin he recalled as an altar boy in Rhode Island. Only later did she consider that the rest of the body might still be inside the wall.

Julie’s art is like Judd’s mainly in its obsessiveness. Sex, violence, and religion are her constant themes. Many of her human

figures have three eyes or an extra nose. She mixes Mexican folk art and Japanese woodcuts with Italian Renaissance portraiture, making work that is both gorgeous and bizarre. Her art reminds me of Hieronymus Bosch’s in its singular, haunting vision. Julie now wears her hair in three asymmetrical gray braids, topped by a beret.

We had a drink on the “cloud balcony” that Julie and Fran built to watch the sky. The clouds in the high desert sail past like galleons. It’s the most beautiful sky you’ve ever seen. As soon as the sun went down, Venus switched on like a searchlight.

I asked Julie what she thought of Judd’s and Irwin’s art. She placed them in the “Because I Say So” school of conceptual art, which began with Marcel Duchamp and the Dadaists. “They do have a way of making you focus on the world and seeing it in a different way,” she said.

I thought about how, when we came out of the Irwin installation, the shadows of a barbed-wire fence on the sidewalk were so striking that Roberta took a picture—art being made by the noticing of it.

I think Julie feels at home in Marfa in part because of the weirdness. She told us a story that obviously delighted her. A couple of blocks away from her house, a 32-year-old man, Christopher Michael Cobos, allegedly beat his wife and was attempting to run her over when family members and passersby pulled her out of the street. Juan Lara, a Marfa cop, arrived just as Cobos was fleeing in his Chevy pickup. Officer Lara

turned on his siren and gave chase. Cobos suddenly stopped, threw his pickup into reverse, and rammed the police car, disabling it. Lara radioed for assistance. A state trooper took up the high-speed chase on Highway 90, which runs beside the Union Pacific railroad tracks. A train was heading west at the same time. Suddenly, Cobos veered off the highway into the pasture, aiming his truck for a spot on the tracks just ahead of the oncoming train. His timing was off; the train collided with the pickup full force and sent it flying over the top of the locomotive and landing upside down. The trooper was astounded to see that Cobos was still alive. An ambulance arrived to take the badly injured man to the hospital in Alpine, but in the middle of the ride, Cobos came to and attacked the EMS attendant. The ambulance driver radioed for assistance. Another state trooper forcibly subdued Cobos, and they got him to the hospital.

The next morning, Officer Lara and another cop drove Cobos back to Marfa to be arraigned. They took the precaution of having him in handcuffs. The county judge, Cinderela Guevara, received the Marfa maniac in her third-floor office in the lovely pink courthouse. She opened the window for some air, and Cobos leaped out, headfirst. Fortunately, recent rains softened the impact. By

now, Cobos had been in a car wreck, been hit by a train, gotten in a fistfight with a state trooper, and plunged three stories out of a courthouse window. He was air-lifted to a hospital in Odessa with a full menu of broken bones and damaged organs.

I later heard that his wife dropped the charges. 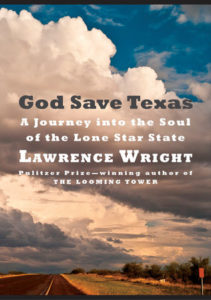 From God Save Texas: A Journey into the Soul of the Lone Star State. Used with permission of Knopf. Copyright © 2018 by Lawrence Wright.

Lawrence Wright is a staff writer for The New Yorker and the author of nine previous books of nonfiction, including In the New World, Remembering Satan, The Looming Tower, Going Clear, Thirteen Days in September, and The Terror Years, and one novel, God’s Favorite. His most recent book is God Save Texas. His books have received many prizes and honors, including a Pulitzer Prize for The Looming Tower. He is also a playwright and screenwriter. He is a longtime resident of Austin. 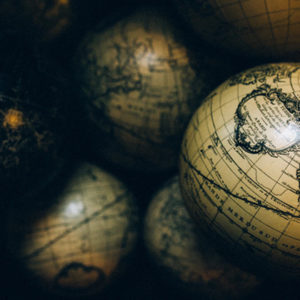 One of the very first questions I wrestled with as a writer was this: Why write in English, the colonizer’s language, when...
© LitHub
Back to top
Loading Comments...