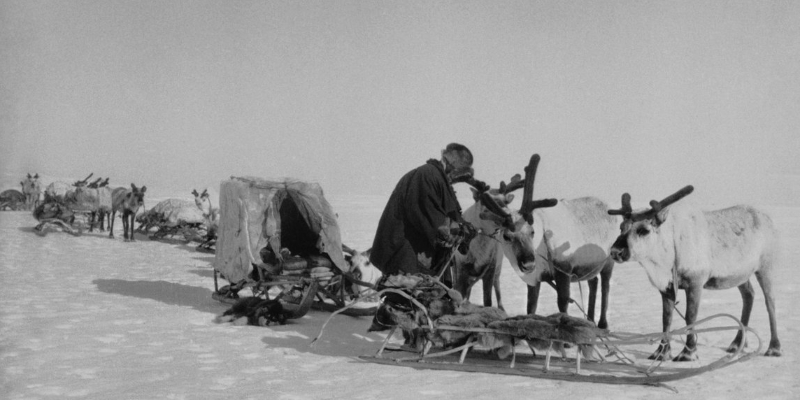 On the Soviet Attempt to ‘Tame’ the Tundra, the Native Chukchi People, and Their Reindeer

In this narrated essay, ecological historian Bathsheba Demuth travels across the easternmost edge of northern Russia, home to the Native Chukchi people and their herds of reindeer. As she uncovers the history of this landscape, she encounters the allure of the apocalyptic arc—the promise of a new world—and the rise and ruin of the Soviet ideology that sought to impose its utopian vision on the Chukchi, their reindeer, and the natural cycles of the Russian tundra. Through the Soviet project’s ambition to “tame” the tundra and turn the living world into an economic resource, we are confronted with uneasy parallels to capitalist society.

We reach the Amguema by midday. A quarter mile or so from its banks is a village, named after the river. A Soviet town, concrete buildings connected by elevated gas pipes shedding insulation. Entropy has taken over on the outskirts, pulling down houses, filling the space between with fireweed. But in the center, there are curtains in open windows and bright paint on the concrete. Somewhere, Pearl Jam is playing, tinny notes floating towards us on the breeze: A dissident is here. Escape is never the safest path.

We stop the uaz by a group of men in rubber boots and mud-spattered orange overalls. One of them introduces himself as the mayor. They are digging a drainage ditch, he explains. The tundra under the town is seeping. Alex asks if the reindeer brigades are close. The mayor points us west, toward the river. If they have returned, their yaranga, their reindeer-hide tents, will be there. He advises that we leave the uaz and walk: since the fall, the roads have decayed.

The fall: sixty years after Karl Luks died, the Soviet Union ceased to exist. By then, in the early 1990s, socialist efforts to control this land had changed many things—built these roads and apartments, brought children into schools, herded reindeer with helicopters and snow machines. Chukotka became a Soviet version of the world we now find normal, where lights come on with a switch and airplanes satisfy any need. But the Soviet Union never did mold time into linear form. Even before the USSR sundered, reindeer herds defied Soviet prophecy and declined. Foxes kept dying from rabies. The impossibility of Karl’s most apocalyptic promise—the freedom from any natural constraint—was borne out. And then what did change disappeared.

Historians tell stories of why. In Chukotka, the stories of the 1990s bend toward the how. How did we survive a civilization in its ending? All that the Soviets brought with them—the gas heat and bakeries, the machinery and medicines—was no more. Alex was a child when the electricity stuttered off. There was no gasoline to move supplies, but there were no supplies to move anyway.

The arrival of the Soviet Union had been terrible for its violence; its dissolution was terrible for its sudden stillness. Towns were emptied as people fled to southern Russia. Older people died without medicine or warmth. Mothers worried that lack of food meant little milk for their infants. Everything was cold. The horizon of time closed: What would summer bring to keep families and whole towns alive during the winter? What would winter do? The fox barns emptied. Untended reindeer went feral or were lost to wolves.

Yet each day came with its small, specific tasks of survival. Chukchi families set up yaranga inside their apartments and burned seal oil lamps for warmth and light. Through summer and fall, people picked berries and greens and packed them in seal fat for winter. It was good to know hunters who lived along the coast, in the villages where Elders still remembered how to kill bowhead whales without specialized equipment. It was also good to know how to tend reindeer without helicopters, sew reindeer-hide boots, harness a reindeer when the snow machine ran out of fuel. Solidarity, that old socialist refrain, ceased to be a slogan and became a necessity. At the end of a world, there are no damned or saved souls, only people and other kin to share in the work of making life possible.

No one knew what would happen, Alex tells me. The trick to surviving was in knowing something about the land and the animals, and in keeping on without certainty.

Bathsheba Demuth is an environmental historian, specializing in the lands and seas of the Russian and North American Arctic. She is the author of Floating Coast: An Environmental History of the Bering Strait, which was named a Nature Top Ten Book of 2019, listed as a Best Book of 2019 by NPR, Nature, Kirkus Reviews, and Library Journal, and winner of the 2020 George Perkins Marsh Prize. Her other writings can be found in The American Historical Review and The New Yorker. 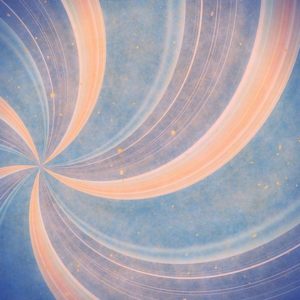 While it might seem obvious to suggest that a work of many pages, or multiple chapters, could hold more truth than a piece...
© LitHub
Back to top