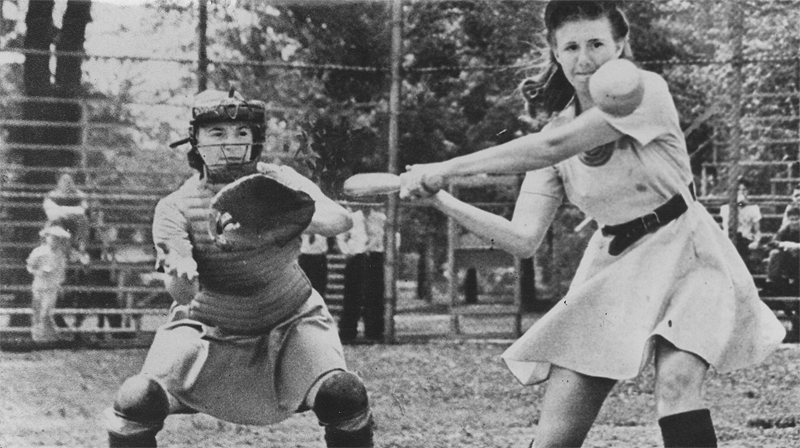 There's No Crying in Baseball—But There Was Lipstick

In the first half of the 20th century, baseball was the undisputed national pastime for women as well as men. There were industrial softball leagues and tournaments and national organizations. By the early 1940s there were tens of thousands of women’s softball teams.

During World War II this pool of talent found a new outlet. The need for military manpower hurt professional baseball; dozens of minor league teams closed down, and major league rosters were filled with near-middle-aged has-beens and never-wases. With factories hiring Rosie the Riveters to fill in for male factory workers, Cubs owner Philip Wrigley saw an opportunity for something similar: an all-women professional baseball league in case the majors had to be shut down. Scouts recruited from the extensive softball network, and in 1943 a four-team league debuted: the Kenosha Comets, the Racine Belles, the Rockford Peaches, and the South Bend Blue Sox.

The All-American Girls Professional Baseball League (AAGPBL), as it became known, lasted 12 seasons, under three different ownerships. It eventually expanded to as many as 10 teams, all in the Midwest. That’s a pretty good run for a women’s team sport; many an effort since has gone under much faster. Salaries were not startling—$60-$85 a week at first—but well above that of most munitions workers. The managers were men, including a number of former major leaguers, such as Bill Wambsganss, who turned the only unassisted triple play in World Series history in 1920, and Hall of Famer Jimmy Foxx.

At first the women played softball, but the game evolved; it’s best to see the sport the women played as a hybrid between softball and baseball that got closer to the latter over time. By 1948 they were pitching overhand, using a hardball. The women showcased an energetic brand of baseball, running wild on the base-paths and sliding head-first, on account of their uniforms—a one-piece dress, cut four inches above the knees.

At a time when many physical educators of both sexes thought that competition coarsened girls, the league’s management placed an emphasis on femininity. Players took mandatory etiquette lessons and had to follow strict rules of conduct. The handbook, created by the league, gave advice on everything from speech (“no slang or slurry words”) to beauty routines and hygiene (shower after games and dry thoroughly) to sportsmanship and stretching. “You have certain responsibilities,” the guide noted, because you “are in the limelight.”

On-field makeup was compulsory; one player recalled that a chaperone held her back from going to the plate in a tense situation until she refreshed her lipstick. The team chaperone had to approve all social engagements. In each town, there was a list of places not to go.

All of this sounds both curious and condescending, but it was a calculated choice to make these athletes less threatening to the social mores they were so enthusiastically flouting. For these jocks, if the price of playing for real was makeup lessons and stupid rules, so be it. And drawing on talent from all over the country, Canada, and even Cuba—but no African Americans, even after Jackie Robinson had debuted—the AAGPBL teams gave a chance to some 545 athletes. Wally Pipp, the man Lou Gehrig displaced at first base, called Dottie Kamenshek of the Rockford Peaches the “fanciest-fielding first baseman I’ve ever seen, male or female.”

Although the AAGPBL was a wartime innovation, the league hit its peak after the fighting was over, attracting nearly a million fans in 1948. By the early 1950s, though, it was declining. Baseball was back, football was on the rise, and television was providing a different form of family entertainment. The league was also not managed as well as it had been under Wrigley and his successor. Spending on promotion and publicity plummeted, and so did attendance. The league died with a whimper in 1954.

But it had a very American resurrection, courtesy of Hollywood. In 1988 the Baseball Hall of Fame opened its “Women in Baseball” exhibit, and dozens of league alumni attended. So did filmmaker Penny Marshall. Four years later, Marshall released one of the few great baseball movies, A League of Their Own, about the AAGPBL during World War II. The film is not historically precise, and too many of the actors throw like girls; they would never have made the cut. But it captures the spirit of the enterprise, and the players, forgotten for decades, became hometown celebrities.

The movie also added a phrase to the game’s rich lexicon of clichés when the manager, played by Tom Hanks, barked at one of his players: “There’s no crying in baseball.” Of course there is. The players of the AAGPBL knew that as well as anyone. But to a woman, they also recalled their years as professional ballplayers as among the most joyous times of their lives. 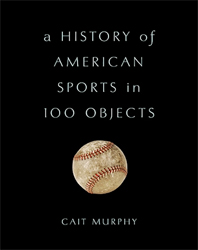 From A History of American Sports in 100 Objects. Used with permission of Basic Books. Copyright © 2016 by Cait Murphy.

Ha Jin on the Long Reach of the Chinese Government 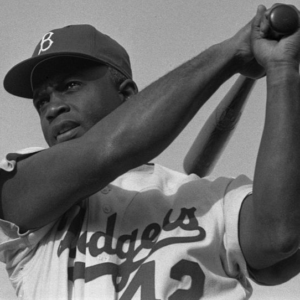 This jersey is made of flannel, redolent of sweat—and full of stories. One story is about 60 years of segregation. When...
© LitHub
Back to top
Loading Comments...