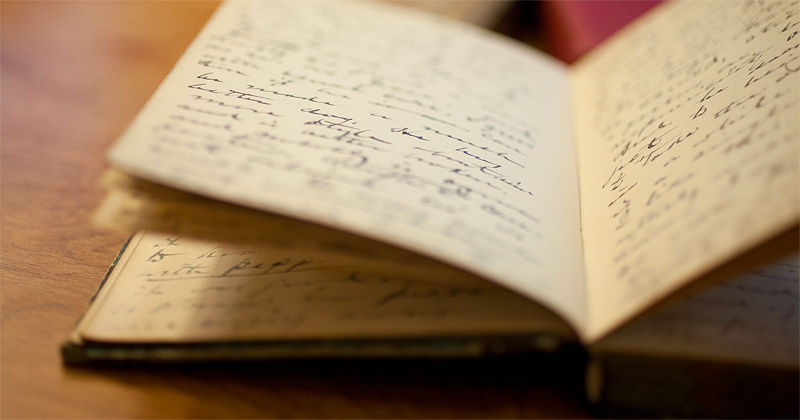 “What stories do we owe each other—ourselves?”

A couple of weeks before my thirtieth birthday, I was less consumed with aging and more with finishing my first book. I felt stalled as an impending deadline approached, so I assigned myself a personal writing challenge entitled “November – No Excuses.” There was no set time of day or entry length. I just needed to write the first thing that came to mind every day for the entire month. While it was meant to free up any reservations, my words appeared haltingly on the page, and the frustration lingered—until my fiancé appeared in the doorway of our home office.

“Hey, how about an early birthday present?” he asked. He looked too pleased with himself for this to be anything typical within the gift vernacular. I answered with a raised eyebrow and guttural, “Uh, ok.” Before I could return to my journal, he whipped out a thin, slightly worn book. Only a few days prior, we’d been discussing early inspirations that informed my love of writing, so I squealed as he placed the beloved children’s book Amelia’s Notebook by Marissa Moss into my hands.

To summarize the plot: Amelia is an observant nine-year-old girl who’s just moved to a new city. After receiving a notebook from her mom, Amelia turns to it as a source of comfort, writing and drawing stories while reminiscing on times with her best friend Nadia, annoyances with her sister Cleo, and the ins and outs of her new school.

Like Amelia, I received my first diary when I was nine and related to her musings on moving, friendship, and art. After a short break, my diaries flourished in my teen years, complete with personal anecdotes and carefully glued collages or letters from best friends and crushes. By eighteen, I had amassed a cherished archive of these stories. I never showed them to anyone, but these people had shown themselves to me, their words brimming with sincerity and trust. Eventually, my creativity would shift online, and the stories I found or told would be subject to character counts and perpetual feedback. (If you didn’t “share” it, did it even happen?)

I’ve always believed in the sanctity of a journal.

Interestingly, the cover of Amelia’s Notebook is filled with multiple warnings: “Top Secret,” “Private,” and “Mind Your Own Beeswax.” First published in 1995, and it’s hard to fathom just how much the concept of privacy has changed since then. (Pre-social media, my own notebooks were covered with taped warnings proclaiming: “Don’t [Redacted] Open This. 🙂.”) So in an age where diaristic impulses are attached to everything we do, it’s worth questioning: Who do we journal for? What stories do we owe each other—ourselves?

These days, journaling seems to be having a renaissance. There are invaluable resources like The Isolation Journals (which I’ve been lucky enough to contribute to) led by revered writer Suleika Jaouad and not to mention a wealth of literary inspiration via The Paris Review’s Diaries column. Offline, I wrote a guided journal for a lifestyle brand, and I’m integrating prompts into my own book. And as I step more fully into my writing life, I’ve made it a point to begin reading diaries of the greats like Anaïs Nin and Susan Sontag.

Even with abundant journaling communities and influences, I find myself internalizing more and expressing less in my current notebook. Like Amelia, my tone is clipped, direct, and at times whiney. “I just want to win the first time,” I wail on one page. “All I do is complain here, but I guess that’s better than complaining aloud?” on another. At one point, Nadia suggests that Amelia should write stories, not just what she notices. But what is a story—a life—without noticing? For me, that’s where everything begins. Perhaps there is something profound in simply noticing how I feel: giving language and space for these emotions to grow into something nourishing—and maybe, at some point, something worth sharing with others.

This tension can be difficult to navigate as I’ve always believed in the sanctity of a journal. When my grandmother (also a November baby) told me I would receive her diaries when she passed, I was haunted by the idea of holding her former selves and secrets. Now, as I find myself in that vast stretch between youthful optimism and seniority, I’ve started to recognize that my grandmother’s “sharing” is an intimate act that goes beyond its recent digital connotation: posting. However, for me, the two terms have become interchangeable.

In an age where diaristic impulses are attached to everything we do, it’s worth questioning: Who do we journal for? What stories do we owe each other—ourselves?

Becoming a writer was my first dream, though, on paper, that really only happened a few years ago. As a high school senior, I started a fashion Tumblr to include in my college applications (with a plan to work in magazines). After the blog gained some traction, I formally relaunched it as a small content business that I went on to operate for five-plus years. Social media was relatively new then but had already set a demanding precedent: share and share often. The content I created and shared included a mix of imagery and writing; I also focused on building a “personal brand” (yes, I know—like Amelia writes at one point—gross) in tandem with the website.

Platforms aside, my relationship with storytelling became rooted in volume and validation more than anything else—with that came its own set of rules that blurred any distinction between what belonged to me versus the audience I was cultivating. Eventually, I redirected my efforts by contributing to other publications, closing the site, and starting a podcast called Slow Stories, which explores slowing down in our digital world. (The book I’m writing [of the same name] is in conversation with these themes.)

At Amelia’s age, activities like “show and tell” took on their own social performance, detached from today’s digital podiums. There are continued echoes of that on social media, which is an open window into our curated worlds. And thanks to creator-driven platforms like Substack, making spaces for personal writing to invite public discourse has never been easier. Take one look at my LinkedIn or Instagram, and you’ll see that I am a product of the internet.

But as I step more fully into my identity as a writer, and no matter how many amazing tools become readily available, I somehow can’t bring myself to publish a newsletter or blog, even if it’s only once or twice a month. As I grow older, I want to approach writing differently (read: more intentionally) than I did earlier in my career. In other words, I need a reprieve from the “always-on” storytelling of the digital landscape.

From childhood to now, journaling has offered that respite and more. In her craft memoir, Body Work, Melissa Febos captures this feeling well: “An empty notebook was a promise. A stack of empty notebooks? Insurance that whatever amount of language might fit inside of each lean binding, that same amount of what filled me could be organized into straight lines, packed onto a train of sense or story that moved inexorably in a single direction. Whatever chaos existed in the abstract, it could not help but submit to the perfect blue lines of a page.”

When I open my navy Moleskine notebook, no decorum is necessary. The blank page is there for ranting and reckoning, dreaming and wishing. It doesn’t have to be edited for presentation. It’s one of the rare opportunities when what I share won’t be commodified or applauded. There is no “look at me,” only “look within.” Reconciling the two has proven to be the most challenging part of this process.

Because, over the years, I’ve shared so much of myself online: my apartment, my clothes, and in the somewhat near future, my book. While not a diary by definition, it’s a vessel that contains stories I never thought would see the light of day. It’s hard work, and as someone who’s still getting used to the idea of having readers, “sharing” is now a nuanced practice.

But by putting pen to paper, I’ve noticed I’d rather share in the direction of genuine connection than pure aesthetic consumption. (I can’t help but think of another moment in Body Work when Febos mentions a quote from Rainer Maria Rilke’s Letters to a Young Poet that she used to keep over her desk: “The work of the eyes is done. Go now and do the heart-work on the images imprisoned within you.” Thanks to her sharing, this quote now lives on the first page of my notebook.)

Some people say they write to be read—noticed. I would be lying if I said I wasn’t buoyed by this idea. But in this next chapter of my life, I’m mainly writing to notice: the little things worth sharing beyond the confines of a screen, opportunities for friendship, the changing colors in the trees, a kind gesture from a stranger, all of the changes roiling deep within myself. In doing so, the act of writing to notice changes my relationship with the world most fruitfully: it slows me down in a way nothing else can.

And given our culture of speed and reactivity, I’m extra considerate of the ideas that remain after the initial urgency passes. I still find myself jumping out of bed in the dead of night to note a thought before losing it… but what if some things are meant to be forgotten? Isn’t writing a form of losing—whether shared in a private diary or with a reader—a piece of ourselves on the page? I’m learning that what we gain in its place is an opportunity to notice that losing and sharing aren’t always so different.

In this way, we can all take a page out of Amelia’s notebook. Her loss of one experience (moving) created room to share—notice—more honestly in a new life chapter. As she remarks: “I start to write, but then things get in the way. Like suddenly I notice my hand that’s doing the writing, and I start thinking, why are hands so wrinkly? Why do we have a thumb? Why 5 fingers and not 4 or 6? Isn’t it amazing how our fingers move and how many things they can do?”

I, too, start to write but continue to wonder: What stories do we owe each other? Why should I be the one to tell them (and how)? Isn’t it amazing when “sharing” reverts into a more honest human form of connection? Why can’t that happen more often? I don’t have all the answers yet, but every year, I ask the questions. Perhaps this reflection comes with age—or maybe all it took was rediscovering the girl with a notebook sharing about her world to remind me to keep paying attention to mine.

Rachel Schwartzmann is a writer and consultant based in New York City. She is also the creator of Slow Stories, a podcast that explores slowing down in our digital age. She is working on her first book, Slow Stories, which will be published by Chronicle.
http://rachelschwartzmann.com/ 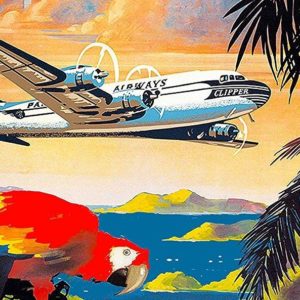