Nicole Yunger Halpern in Praise of an Expansive, Fantastical Approach to Knowledge

The world felt larger during the Victorian era. To the average person, it seemed to consist less of suburb-like countries—easy to hop between for a weekend at the price of an airline special—and more like a darkened concert hall so vast, you couldn’t illuminate the far corners with a candelabra. What a challenge—and what an adventure—for the men and women who bore the newly minted label of “scientist.”

Everything from astronomy to zoology called for measuring, cataloguing, debating, tracing patterns, and identifying fundamental principles. And what instruments those scientists used in their measurements: poems in verdant velvet and polished wood, glinting brass and winking glass. Poetry suited 19th-century scientists, who still sometimes referred to their profession as “natural philosophy.” As scientists charted out their disciplines and defined the practice of science itself, they engaged in a grand quest. The associated sense of exploration permeates not only histories of the 1800s, but also novels that reimagine the 1800s with a fantastical twist. 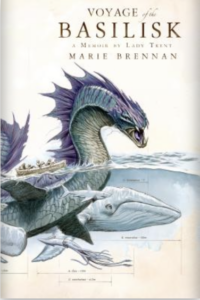 Marie Brennan, Voyage of the Basilisk: A Memoir by Lady Trent
(Tor Books)

Imagine that our world contained dragons in the same way that it contains dolphins and dingoes. Now, imagine that you were the scientist—or natural historian—tasked with introducing rigor and precision into “draconic studies.” Moreover, imagine that you were a Victorian woman who couldn’t travel unaccompanied, who faced false accusations of canoodling with male colleagues, and who forged onward anyway, entranced by her studies. Voyage of the Basilisk is the midpoint of a five-book series whose premise struck me with its originality. Voyage, portraying the story of its heroine as she dissects sea snakes and sketches quetzalcóatl, is the series’ most vibrant title. 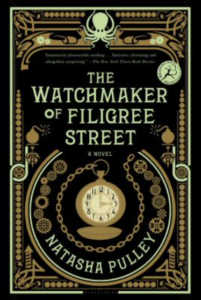 In the bowels of Oxford, a young woman performs an experiment famous in our world for helping spark Einstein’s theory of spacetime. Yet, this physicist draws different conclusions, building an alternative theory of light, chance, and information. Her studies initiate a conflict with Keita Mori, a Japanese watchmaker whose clockwork-driven octopus automaton seem to have a life of its own. The tension between Mori’s power and frailty captivates: He’s strong, yet lonely, a baron in Japan, but the victim of racism in England. Is Mori a puppeteer pulling the strings of the physicist’s future, or is he a casualty of her ambitions? 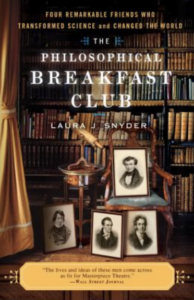 Early in the 19th century, four students determined to transform science: enhance its precision, professionalize it, augment the role of evidence, and harness science for the public good. In this book, historian Laura Snyder argues that they succeeded. Furthermore, the friends’ enchantment with all of nature’s facets enchanted me. In one striking image from the book, the polymath William Whewell describes how he plans to commune with a mountain: Upon “sketching it from the bottom I shall climb to the top and measure its height by the barometer, knock off a piece of rock with a geological hammer to see what it is made of, and then evolve some quotation from Wordsworth into the still air above it.” The book shows that this broad-mindedness and curiosity, together with rigor, determination, and collaboration, enabled the four friends to forge the modern science. 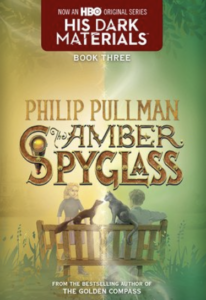 Lyra Belacqua spent her childhood in a world where adventurers travel by dirigible and clockwork flies serve as spies. She acquires an alethiometer, or “truth meter,” that lends its name to The Golden Compass. That acclaimed novel initiates a trilogy whose final installment I believe deserves equal renown. In it, Lyra learns how ontogeny recapitulates phylogeny: Just as early humans gained consciousness, separating from other animals, so do a girl’s capacities for reason and love blossom as she grows up. In a real-life fantasy of mine, I once had tea with the author, Philip Pullman, at the house of quantum physicist David Deutsch. Being a quantum-physics graduate student at the time, I was delighted to hear about how David’s research inspired the multiplicity of Lyra’s worlds. 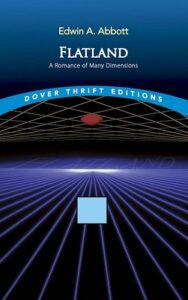 Edwin A. Abbott, Flatland: A Romance of Many Dimensions
(Dover Publications)

Some Victorians held séances to contact spirits living beyond our three-dimensional world. Other Victorians—whose names haunt mathematics courses today—reasoned about many-dimensional objects geometrically. How can we understand objects that cannot be seen or touched, but can be said to exist, in a sense, nonetheless? Edwin A. Abbott, a 19th-century schoolmaster, shows how in Flatland. The novella follows a respectable, middle-aged square whose universe is a plane called Flatland… until a sphere appears, rocking his worldview. Flatland surprises (how many books make us empathize with a shape?) and instructs, while also lampooning the Victorians’ underestimation of women: Taking to its absurd extreme his contemporaries’ assumption that women are naturally irrational, Abbott populates Flatland with women so literally narrow-minded that they consist of single lines. 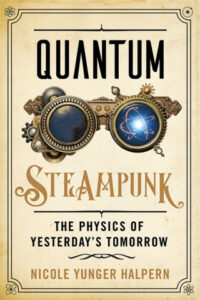 Nicole Yunger Halpern is a theoretical physicist and a Fellow at the Joint Center for Quantum Information and Computer Science at the University of Maryland and the author of the new book Quantum Steampunk: The Physics of Yesterday’s Tomorrow.

Linda H. Davis on the Literary Fame and Notorious Exploits of Stephen Crane 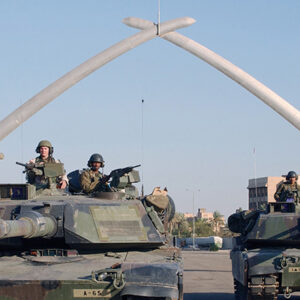