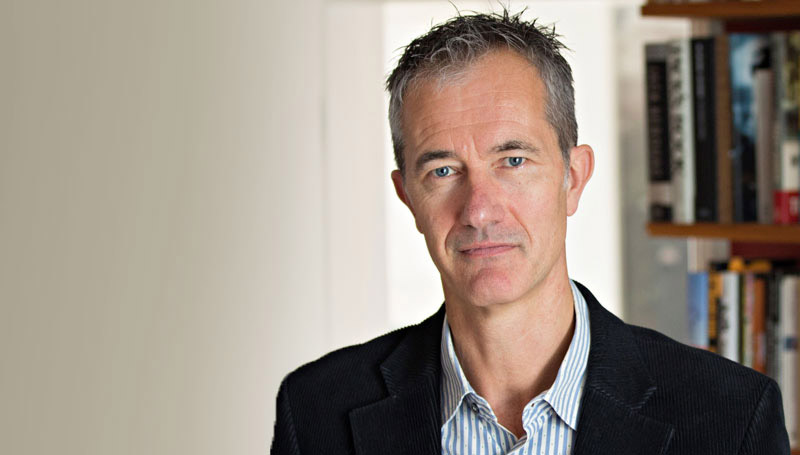 Although he allows that Venice Beach is certainly “delivering on the meteorological front,” read the chapter on Los Angeles in Geoff Dyer‘s excellent new book, White Sands (Pantheon Books), which he’s currently on tour to promote, and you’ll find that he’s perhaps more temperamentally aligned with the long tradition of Europeans skeptical of the city’s paradisiacal promises. Theodor Adorno, for instance, whose old house Dyer visits, was completely unconvinced of the benefits of a Californian lifestyle, writing that “dozing in the blazing sunshine is not at all enjoyable, might very possibly be physically unpleasant, and certainly impoverishes the mind.” It’s the sort of culture clash, between old-school European intellectualism and new-world hedonism, that makes for good copy.

Hari Kunzru, who was doing the interviewing at Strand, observed that Dyer’s writing also reaches new heights of exuberance when he finds something to be disappointed by. For sure, disappointment is the source of much entertainment in the chapter on the bloody awful time he has trying to see the Northern Lights. “We had had the experience of a lifetime,” he writes afterwards, “but it was not the experience that we had hoped for; it was like a lifetime of disappointment compressed into less than a week, which actually felt like it had lasted the best—in the sense of worst—part of a lifetime.” He’s also nonplussed by Tahiti, where he travels in the footsteps of Gauguin, and by the prospect of a guided tour of the Forbidden City (“few words have the capacity to make [my heart] sink as rapidly or deeply as the word ‘guide'”).

His resistance to feeling what you’re supposed to at some of the world’s wonders is perhaps a consequence of awe-fatigue, a reluctance to buy into the pre-packaged travel narratives promoted by a million honeymoon photos and boutique travel agencies. But it’s not really a new thing, as Dyer pointed out—Gauguin himself struggled at times to find what he wanted to when it came to “authentic” experience. And of course if, as Dyer perceives in Tahiti, landscapes must now be “cosmetically improved and maintained in order to look perfectly natural” (my emphasis), we are in suspect territory indeed. When Geoff and I emailed last week, I asked him whether his particular disappointment is born out of a sort of anxiety about this, or whether it’s possible to visit a place innocently and see it fresh, unmediated, shorn of myth.

His resistance to feeling what you’re supposed to at some of the world’s wonders is perhaps a consequence of awe-fatigue, a reluctance to buy into the pre-packaged travel narratives promoted by a million honeymoon photos and boutique travel agencies.

“I think the myth is often an integral part of a place,” he replied. “Maybe the issue is one of inauthenticity, about my not being able to fake it, not being able to claim I’m having a big experience when I’m not. It’s a source of some friction between my wife and I. I absolutely refuse to make the best of a bad job, to say we’re having an ok time when it’s obvious we’re having a miserable time. I’ll rather walk around starving hungry than settle for just something—anything—to eat.”

Not that Dyer always needs to fake it. He’s genuinely impressed, for instance, by Walter De Maria’s The Lightning Field, the famous (and famously huge) work of art in New Mexico’s Catron County that comprises four hundred stainless steel poles arranged in a grid one mile by one kilometer. Why? 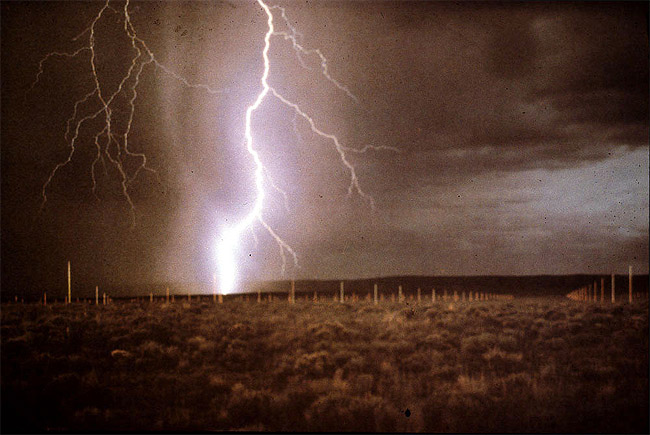 “If I had to sum it up I think I am always moved by experiences where/when the temporal is manifest in the spatial, when history is apparent in geography. Less grandly, there are always incidental pleasures, wherever you are. And I like the human drama—romance often—that takes place in the midst of places charged with some special significance. The place in such circumstances is always more than a backdrop: it has a kind of agency. That’s also the case, obviously, in the novels and Jeff in Venice, Death in Varanasi. Disappointment, I suppose, is when none of the above pertains.”

White Sands is filled with such charged places, from the sites of Dyer’s youth he infuses with his own mythmaking to the beach at Koh Tau where two British tourists were murdered. How the aura of a place manifests itself develops into one of the book’s major themes, and finds its logical endpoint in the LA chapter, where Dyer writes about the work of Antoine Wilson, “The Slow Paparazzo,” who photographs places where celebrities have just been. Wilson’s pictures are funny because they’re of nothing, really; but the joke leaves a serious taste. You do look at them differently. What were Naomi Watts/Jared Leto/Buzz Aldrin doing there? (One may be reminded of the line in Jeff in Venice about how “it’s possible to be a hundred percent sincere and a hundred percent ironic at the same time.”) Joking aside? “Some places have it,” Geoff tells me, “that sense of something converging on and emanating from them. I’m always on the scent of that. Lawrence uses the word ‘nodality’ about such places in his amazing essay on Taos Pueblo.”

D.H. Lawrence: another Englishman, like Dyer, swept away by the American West. Most reviews of White Sands have commented on its author’s Englishness, and it does seem to be an important part of his writing persona, both there and in his last book, Another Great Day at Sea, in which he spends a week aboard a US aircraft carrier. His foreignness enables specific enthusiasms (for the lack of class-driven hierarchy on the USS George H.W. Bush, for example) and, he speculates, gives him access to perceptions that may be unavailable to the American writer. I wonder what it is in the American character that so appeals to a certain kind of British mind.

“The usual things,” he writes: “the openness, the freedom from class antagonism, the way anyone can speak to anyone else and, above all else, the amazing politeness, the universal experience of good manners—especially in California.”

I have to ask Geoff about the extraordinary note–a disclaimer, really—at the start of White Sands. In it he writes: “this book is a mixture of fiction and non-fiction. What’s the difference? Well, in fiction stuff can be made up or altered. My wife, for example, is called Rebecca whereas in these pages the narrator’s wife is called Jessica. So that’s it really. You call yourself the narrator and change the names.”

I wonder what this is about. Why would a book draw attention to itself in this way? An anxiety over how to write “truthfully,” perhaps? “My concern in that note is not really ‘truth’ but form and the expectations people bring to certain forms,” he replies. “The note serves like a kind of welcome mat outside the house, kindly asking people to step inside, to enjoy what this house has to offer and not to want it to conform to the same floor plan as other places they might perhaps be more used to visiting.”

Dyer may be underestimating the attachment some readers have to epistemological certainty. Admitting that it felt gauche to do so, Kunzru, too, had to ask about the book’s title essay, an extraordinary short story (perhaps) in which Dyer (or the narrator) and his wife pick up a hitch-hiker in the desert only to pass, almost immediately, a sign that reads: “NOTICE / DO NOT PICK UP HITCHHIKERS / DETENTION FACILITIES IN AREA.” The remaining pages are like a Roman Polanski movie rewritten as a very British comedy of manners. Does it matter if that’s how it really happened? Or, indeed, if it happened at all?

I guess not. After all, all of White Sands‘s essays are in the continual process of loosing themselves of generic strictures. The Gauguin piece strays between travelogue and biography; the musings on photography sprinkled throughout continue a philosophical conversation that Dyer began with The Ongoing Moment a decade ago; there’s also autobiography, some (apparently more) conventional travel writing, and hints of fiction. But isn’t this the point? That the experience of time and place is inherently, for each of us, a strange brew of fiction and nonfiction? I laugh, for instance, when I read in Another Great Day at Sea Dyer’s self-description as “a scrawny expat, a leftover from a novel Graham Greene had decided not to write,” where the meaning and humor derive from my reading of Greene, his reading of Greene, his experiences in Bahrain, and his processing of that experience into entertaining prose. It doesn’t matter if the thought occurred to him at that moment because it’s illuminating anyway. Fiction colors life, is part of life. It gives meaning to the experience in the same way that arriving at 316 South Kenter in LA is meaningful to Dyer because he knows Adorno once lived there.

White Sands’s essays are in the continual process of loosing themselves of generic strictures.

Places can in fact be totally transformed, Dyer seems to be saying, by affect. Intertextual knowledge, where historical knowledge and reading intersect with lived experience, seems at times to be an organizing principle in his experience of travel. When he visits Robert Smithson’s great land-art piece Spiral Jetty, for instance, he records himself reading Smithson’s words about the surrounding landscape and listens to them while traveling through that very landscape. Why, I ask. “To quote Dylan from ‘Isis’,” he writes, “‘It’s only natural.’ I feel obliged to add that the word ‘intertextuality’ is not in my vocabulary!” 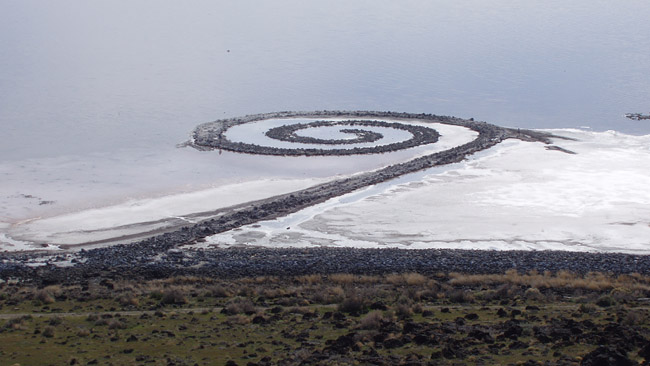 Before time’s up, I want to ask Geoff about his essay “The Moral Art of War” (anthologized in Otherwise Known as the Human Condition), in which he argues that much of the best writing of the early 21st century was done by journalists and others writing nonfiction books about the wars in Iraq and Afghanistan, and the post-9/11 world. Where are we now?

“I had to amend that diagnosis in the wake of Phil Klay’s Redeployment,” he replies, “and I’m very much looking forward to Matthew Gallagher’s Youngblood. More generally, as a reader, of course I’m always reading fiction but I’m no longer reading exclusively fiction as used to be the case.”

And what might be next for Dyer? What is his great subject to come? “I would be happy,” he writes, “if I could one day write something about Beethoven.”

In Search of Obscure Words for Even Rarer Feelings 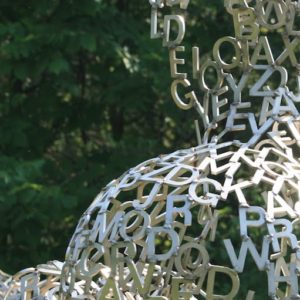 In Search of Obscure Words for Even Rarer Feelings

Bottling it Up The Victorian critic John Ruskin contemplated the clouds every morning. He sketched their purple wisps and scarlet...
© LitHub
Back to top
Loading Comments...