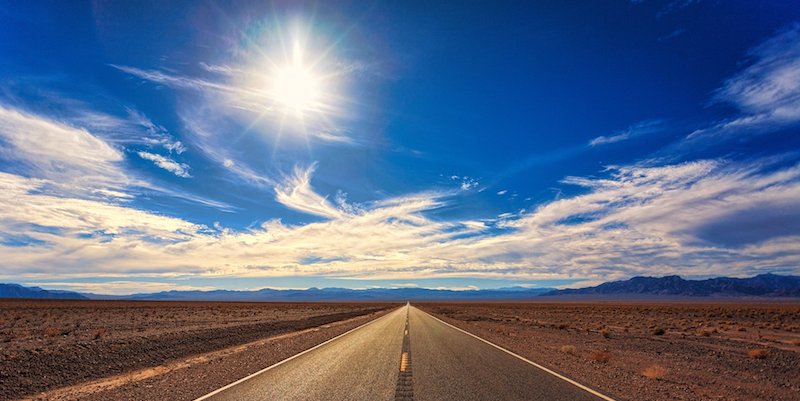 On the Reverie and Detachment of the American Road Trip

"Mechanical travel blunts our sense of the world."

Roads furnish our imaginations with images of freedom. Journeys like Kerouac’s have come to stand for a sense of unimpeded progress and self-discovery, an open horizon connoting limitless possibility. Roads conjure what it feels like to be modern. They open up the world for us, but, as Emerson realized, they also dictate the direction we take. Roads accompany us for so much of our lives—how much time do any of us spend more than a hundred meters from a road, or out of earshot of their whispering voices?—and yet we have somehow trained ourselves not to really notice them at all.

In 1983, Vanity Fair commissioned the artist David Hockney to illustrate a story about the road trips Vladimir Nabokov undertook when he was writing Lolita. As he researched and wrote the novel in the 1950s, Nabokov crisscrossed the United States, driven always by his wife, Vera, in a 240,000-kilometer tapestry that stitched the east coast to the west. Hockney’s own road trip began with a journey through the Mojave Desert during an April storm. His subject was proving elusive, and the weather didn’t help. But the next morning, after some further desultory driving and photographing, Hockney proposed to his driver that they might find something promising at an intersection they had passed the day before. It took some time, but eventually they found it, and from the images he took over the next eight days Hockney would compose one of the 20th century’s most iconic images of the road.

Pearblossom Hwy., 11–18th April 1986, #2 is a trap for the viewer’s perspective. A collage assembled from hundreds of individual photos, it depicts an unremarkable stretch of desert road where the Pearblossom Highway crosses California’s Route 138. The road tapers into the distance from a deep wedge in the foreground. Two parallel lines of thick yellow paint mark the division between lanes, running from the bottom edge of the picture to its midpoint, where it is bisected  by the horizon of the blue, rippling Angeles Crest Mountains in the distance. Four road signs, yellow, green, and red, track the right-hand side of the road toward its vanishing point; the scrub on either side is dotted with spiny Joshua trees and littered with discarded bottles, cans, and cigarette packets. The upper portion of the painting is almost entirely taken up with the California desert sky, a big naive strip like the bar of blue a child might paint. The elements are simple and nondescript: asphalt, road signs, trees, mountains, sky. But the whole is dizzyingly precise. Every single image is taken in close-up and often head on (Hockney used a ladder to shoot the stop signs and to look directly down on each item of trash). Wherever it travels, the eye is arrested by detail; each crack in the painted road markings and flash of sunlight caught in the wrinkles of the crushed can of Pepsi is intimately and immediately present.

Roads can do something odd to our sense of time and space. When we travel by road, we often do so in a kind of reverie. As a child, I would fill the boredom of long car journeys by imagining I was watching myself running alongside our car and leaping impossibly over the roadside clutter. It was a fantasy of perfect, unimpeded motion. Now, as I settle behind the wheel, other times and places—unresolved problems, anticipation of my destination, or unspooling threads of memories—fill my thoughts, and I find I can travel without really registering the world around me.

Seamus Heaney called this the “trance of driving” and composed his poems under its spell, beating out their measure on the steering wheel. Many roads are laid out to suppress our sense of place. High verges built to muffle traffic noise also obscure our view of what lies beyond the road; the bland gray crash barriers barely register. The white lines progress relentlessly toward the horizon. For Joan Didion, driving on the freeway around Los Angeles involves a form of concentration so distilled as to become narcotic, “a rapture-of-the-freeway.” The lulling rumble of motor travel, the incantation of road signs marking the passage of miles, the low rush of our own slipstream—all can conspire to lift us out of time. In such moments we are, in a way, perfected. “The mind goes clean,” writes Didion. “The rhythm takes over.”

Detachment is the common experience of the road today.

The history of modern road travel is the pursuit of the perfect road, the most frictionless way possible. A smooth passage through space is perhaps the fundamental promise of modern life, like a spell cast to release us from the heaviness pinning us to the earth.

This transmutation began in the 19th century with the railways. In the 1830s, mechanized transport increased the speed of travel by stagecoach by a factor of three, and   in doing so put travelers by rail into a fundamentally different relationship with time and space. An 1839 article in the Quarterly Review remarked with breathless enthusiasm that under the influence of rail travel, the world would “shrivel  in size until it became not much bigger than one immense city,  and yet by a sort of miracle, every man’s  field would  be found not only where it  always was, but as large as ever  it was!” Decades before Lewis Carroll subjected Alice to an enchanted regimen of shrinking and expanding, the railroad had changed the world into a wonderland that mimicked the processes of geological time, contracting the planet’s greatest rivers to streams, its lakes to mere ponds.

With the invention of the motorcar, roads were built to mimic the perfection of the railroad. Whereas the old highways had to adapt to the contours of the landscape, contorting to accommodate each immovable peak and valley, the railroad simply drove its tunnels and cuttings through the earth. Twentieth-century roads were built to the same technical standards, forcing the land to submit to the demand for frictionless movement. The historian Wolfgang Schivelbusch notes that the mechanization of travel induced a corresponding mechanization of travelers’ sense of their place in the world. The velocity of rail travel—as much as forty miles per hour in the 1830s—destroyed the depth perception that defined preindustrial place-consciousness. While objects at a distance could be observed in a newly panoramic vision, their aspect changing rapidly as the train sped past, the foreground was lost to a blur of indistinguishable shape and color. Preindustrial travelers, moving on foot or drawn by animals, would be immersed in their immediate environment, but after the railroad most travelers would feel that they no longer occupied the same space as the objects they saw out the window.

This detachment is the common experience of the road today. As we travel on it, we are caught up and carried away; inured to our surroundings, bounded by steel and glass, we are absorbed by infrastructure, numbed by vibration. As we observe the world through the cinema screen of the windshield, our minds travel elsewhere while our bodies journey to their destination. Mechanical travel blunts our sense of the world. Emerson said the railroad fed travelers’ egocentrism, reinforcing the impression that “whilst the world is a spectacle, something in himself is stable.” But in Pearblossom Hwy. #2, every intimate closeup detonates our sense of stability. Hockney’s collage stitches us back into the scene. The dulling patterns that remove us from the world—the regular pulse of road signs marking distance reminding us that what matters is not where we are but where we will be, and the white ticker-tape road markings clicking by endlessly insisting that “here” is in fact always several meters ahead—are replaced by hundreds of single moments. As if to remedy the enchantment of the perfect road, Pearblossom Hwy. #2 returns us to the here and now—or, rather, to a here composed of countless “nows.” The road, it seems to suggest, is a charm that must be broken. 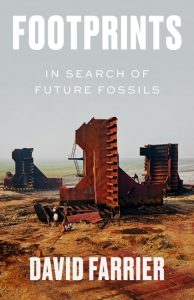 How to Pull Off a 250-Mile Protest March? Grit (And a Little Bit of Harry Belafonte) 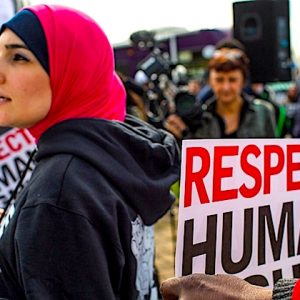 How to Pull Off a 250-Mile Protest March? Grit (And a Little Bit of Harry Belafonte)

Harry Belafonte sat on a couch in his resplendent, wood-paneled office, telling us not to lose hope. The week before, several of...
© LitHub
Back to top
Loading Comments...