When I migrated the first time, from the belly of my mother into the world, I caused her no end of trouble. Instead of coming out head first, like my five sisters and three brothers, I decided to come out feet first. The risk of death was real for both my mother and myself. To this day, she can recall the terrible pain. Why did I do that? Was it because I wanted to start walking, that I was ready to move out and discover the world? My birth came to be a perfect metaphor for my destiny, for my entire life.

I am the sixth of eight siblings. Very early on, I started speaking my mother tongue, Berber, fluently, making me a kind of phenomenon in my neighborhood and my family. My father was fascinated. My mother would never have said which of her children was her favorite. Making God her witness, she would say: I love all my children in the same way, there is no difference between them. But my father was something else. He always stated, for all the world to hear, that I was his favorite. When I was a child he would buy me brioche every morning. And he would buy special cheese, just for me. This cheese was proof that I was the spoiled child of our poor family.

My parents, my sisters, and my brothers never forgot that conversation and would laugh at me. One of them, to tease me, started calling me Amara Green Cheese. In Arabic, when someone wants the impossible, we say: What do you want? Bird’s milk? For my family, it wasn’t bird’s milk but green cheese that proved I was a spoiled, strange dreamer of impossible dreams.

The British writer Colin Wilson says, “Imagination should be used, not to escape reality but to create it.” I agree with him. For as long as I can remember, these two ways of dealing with reality have intertwined, each playing a key role in shaping my life.

Every summer as a child, I’d see Algerian immigrants arriving from Paris to spend their vacations in the mountain village where my grandmother lived. I saw that the women and children changed their clothes every day, so I concluded that they didn’t have to wash their clothes like we did. I thought that they lived in a paradise where everything was available and possible. As a result, I became convinced that dreams can become reality.

My dream of becoming a writer began at age 15, when I read Gustave Flaubert’s Madame Bovary. I loved the book. The depth of feeling, the power of the description, Flaubert’s understanding of Madame Bovary all fascinated me. I decided then and there that I would be a writer, remembering Victor Hugo’s challenge: Je veux être Chateaubriand ou rien. So I said to myself: Je veux être Flaubert ou rien—I want to be Flaubert, or nothing.

Nowadays, I am often called “the migrant writer.” I am very proud of that title, as all of my literary projects have been influenced by immigration. I am convinced that every migration is a birth and every birth is a migration. My first birth was in Algeria, in 1970. When I left there in 1995, I was born for a second time in Italy, where I lived for 18 years—first as a political refugee, then as an immigrant. In June of 2008, I became an Italian citizen. During the long adventure of those years, I experienced the challenge of immigration, which for me centered on a cultural quandary: how could I reconcile my culture of origin with the new cultures I was experiencing?

Anthropologists employ the concept of “acculturation” to explain the permeability of cultures. When two cultures meet, they undergo a reciprocal influence: they abandon the ineffective, old elements, and acquire new, more functional ones. I tried to retain the best of my Algerian culture and adopt aspects of Italian culture. I had no choice but to learn a new language. I had always dreamed of myself as being an Arabic writer, but when I moved to Italy I decided to become a bilingual writer. Of the five novels I went on to write, three were written in both Arabic and Italian.

In Clash of Civilizations Over an Elevator in Piazza Vittorio, the main character Amedeo says, “So many people consider their work a daily punishment. Whereas I love my work as a translator. Translation is a journey over a sea from one shore to the other. Sometimes I think of myself as a smuggler: I cross the frontiers of language with my booty of words, ideas, images, and metaphors.”

I write in Arabic and Italian but my life also encompasses Berber, French, and English. I can say that I am a linguistic polygamist of sorts, and so linguistic mediators, such as interpreters and translators, have always fascinated me. My own literary goal has become to mix and “contaminate” my many languages with each other through literature.

When I moved to New York in August 2014, it was my third immigration, my third birth. When I arrived I began exploring American literature directly, in English, and investigating American life in both New York and elsewhere in the United States.

Living in New York is like living in many countries at the same time. You’re surrounded by a multitude of languages, you change streets or neighborhoods and find yourself in a new country, hearing Spanish, Arabic, Hindi, Chinese. Often, I’m taken for Latino, and people speak to me in Spanish. I’m sorry to disappoint them—though I would like to learn their language, simply to communicate with more people. The most important challenge for me is to understand the American worldview: the references, the information, the automatic understanding we use to give sense to our lives. To do this I must master the language that gives life to these worldviews.

So now I am raising my standards: I’d like to make English my third working language. In translation, this means I am working hard to become a trilingual writer: my personal version of the American dream.

It has been 30 years since I first fell in love with Flaubert, and I maintain that same zeal and enthusiasm. My adventure as a writer is not over and I hope it never will be.

But there is one dream I can close the book on: Amara Green Cheese finally got his revenge. In 2000 I spent a few weeks in Bristol, England. One day, I entered a supermarket that had a large cheese department. There I found my green cheese, made green with apple skin. I was so excited that I called my parents, my sisters and my brothers and told them, “I was right, green cheese exists!” The story is not over. I have now discovered pesto cheese and it’s green, too.

Amara Lakhous is an Italian-Algerian writer whose novels have appeared in both Arabic and Italian. His latest, The Prank of the Good Little Virgin of the Via Ormea, is out now from Europa Editions. 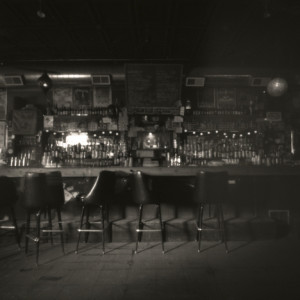 I’m never as lonely as when I’m in a crowded room. It’s always been that way; as a child, I’d always wish I could...
© LitHub
Back to top