Jocelyn C. Zuckerman Looks at How the Industry Has Affected the Developing World

Dr. Anoop Misra drew back the flimsy curtain in his office, and the patient stepped down from the exam table, gently tugging the bottom of his shirt so as to obscure a considerable midsection. “I’m not here to give you sweet words,” said the soft-spoken endocrinologist, who, in addition to seeing patients six days a week at this upscale health center in New Delhi, chairs India’s National Diabetes, Obesity, and Cholesterol Foundation. Dressed in a white lab coat and with neatly parted thick gray hair, Misra reclaimed his position behind the desk and turned his attention to the patient’s wife. What did she cook at home, he wanted to know, and using which kinds of oils? “The diet is all fried,” the doctor told me after the couple had gone. “This man is sixty-two and has already suffered a heart attack seven years ago.”

Across the lobby of the bustling facility, where women in saris and men in sandals sat beneath signs reading “Advanced Centre for Insulin Pump” and “Centre for Metabolic and Weight-Loss Surgery,” Shubhra Atrey, one of three clinical nutritionists who work with Misra, echoed her boss’s dismay. South Asians are genetically inclined toward elevated risks of diabetes and cardiovascular disease, but in the seven-plus years she’d been practicing, Atrey said, she’d watched her fellow Indians undergo a transformation. “There’s more obesity, including childhood obesity, and we have seen that obesity causes more diabetes.” These days, she and her colleagues were seeing some sixty obese patients every day. “We counsel them. Ninety percent of the time, we discuss about oils. Bad oil, good oil. Palm oil is not a very good oil.”

I had traveled to India to see for myself how the palm oil revolution was playing out in the country that imports more of the stuff than any other nation. A 2017 study in the New England Journal of Medicine found that the global prevalence of obesity and overweight had skyrocketed over the previous twenty-five years, with more than 10 percent of the world’s population now considered obese. Some of the highest increases had occurred in developing countries, many of which were also confronting epidemics of under-nutrition. In India, non-communicable diseases such as diabetes recently overtook infectious ones such as diarrhea and tuberculosis to become the leading killers. Today, India has more patients with Type 2 diabetes than any other country in the world. (Yes, it also has more people than most, but those with diabetes form a disproportionately high percentage of its population.) The Journal researchers pointed to the “increased availability, accessibility, and affordability” of high-calorie foods to explain the worldwide packing on of pounds. “We have more processed food, more energy-dense food, more intense marketing of food products,” Dr. Ashkan Afshin, the study’s lead author, said upon its publication.

We also have more palm oil. During the years looked at by the researchers, 1980 to 2015, global production of the commodity increased more than twelve-fold, from 5 million to more than 62 million metric tons. The growth in production of palm oil has surpassed even that seen in wheat during the transformative period of the mid-twentieth century known as the Green Revolution. What happens to all that oil? Some 70 percent of it ends up in just the sorts of processed and “energy-dense” foods cited by Dr. Afshin.

“It is expected that 45 of every 100 additional calories in the period up to 2030 may come from oil crops,” Carl Bek-Nielsen, the model-pretty Dane who now leads United Plantations, told an audience of industry executives in 2012. “Oil palm’s contribution as a stabilizing crop to global food security is now undisputed.”

Well, not exactly. While it’s true that many of the world’s people could use more calories—and certainly we all need some fat in our diets—the global glut of palm oil is in fact diminishing food security, in a fairly drastic way. It’s common to blame sugar for the world’s weight problems, but in the last half-century, refined vegetable oils have added far more calories to the global diet than has any other food group. Between 1961 and 2009, for example, the availability of palm oil worldwide went up a staggering 206 percent. Over the same period, the availability of sugar and sweeteners increased by just 20 percent. More recently, in the decades from 1991 to 2011, the global supply of food energy increased by 278 calories per person, with more than a quarter of that increase coming from vegetable oils. In South Asia, the oils accounted for 32 percent of the increase in consumed calories. But it isn’t just the oils themselves. Part of the problem is the sort of nutrient-deficient, heavily processed junk that all of this cheap oil enables. And land planted with oil palm, of course, is land not being used to grow healthful foods such as fruits, vegetables, and legumes.

Over the last four decades, an influx of foreign investment into the food markets of poorer countries has helped fuel this trend. Between 1980 and 2000, investment from the United States into overseas food processing quadrupled, from $9 billion to $36 billion. Most of that cash came from multinational companies such as PepsiCo, Nestlé, and Yum! Brands, the Louisville-based owner of Pizza Hut, KFC, and Taco Bell—companies that make just the sort of ultra-processed foods for which palm oil is ideally suited. Just as farm policies in the United States led to the overproduction of corn and subsequent rivers of high-fructose corn syrup and endless conveyor belts of fast food in this country, so have international trade patterns abetted the palm oil bonanza, bequeathing a global landscape saturated in deep-fried snacks and fast and processed foods.

The implications for public health are enormous. Over the past decade, large-scale studies from France, Brazil, the United States, and Spain have echoed the Lancet in finding that the high consumption of ultra-processed foods is associated with higher rates of obesity. When eaten in large amounts, they have also been linked to depression, asthma, heart disease, and gastrointestinal disorders. In 2018, a study published in The BMJ (formerly British Medical Journal) found that a 10 percent increase in the proportion of ultra-processed foods in the diet led to an increase of more than 10 percent in the overall risk of developing cancer.

That said, the oil itself does raise some concerns. Part of what makes palm oil so useful to these brands is the fact that it is 50 percent saturated, which helps with both providing the desired “mouth feel” and prolonging the shelf life of products. As explained previously, palm oil’s high smoke point makes it ideal for frying up chicken nuggets, French fries, cheese curls, and doughnuts—as well as such Indian staples as samosas and poori. (Palm kernel oil, at 80 percent saturated fat, tends to be used more by the makers of chocolates and other confectionery, who prize its hard texture, among other qualities.)

In 2018, following moves by the United States and other countries, the World Health Organization (WHO) announced an initiative aimed at eliminating artificial trans-fatty acids from the global food supply by 2023. The substance is produced when vegetable oils are partially hydrogenated, generally for use in processed foods. (Trans-fatty acids occur naturally in meat and dairy products from ruminant animals.) Nutrition experts applauded the effort to phase out the industrially produced fats, which have been linked directly to cardiovascular disease, but their common replacement—palm oil— presents problems of its own.

Public opinion has shifted somewhat when it comes to the relative dangers of saturated fats—replacing them with refined carbohydrates, for example, appears to do more harm than good—but studies have shown that diets rich in palm oil, which contains minimal amounts of omega-3 and omega-6 fatty acids, both of which have health benefits, lead to a higher risk of heart disease than those heavy in such unsaturated fats as olive or soybean oils. (When it comes to consuming palm oil in processed foods, eaters are in for a double whammy, as it tends to appear in concert with refined carbohydrates.)

In recognition of these findings, the American Heart Association released a Presidential Advisory on Dietary Fats and Cardiovascular Disease in 2017 in which it called for lower intakes of saturated fat and higher intakes of unsaturated fats. “Trans fats carry a bigger risk per gram than saturated fats,” explained Barry Popkin, a professor of nutrition at the University of North Carolina–Chapel Hill, “but the volume of palm oil being consumed is so much greater.” When it comes to the overall health effects, he said, palm oil may have a much more harmful impact.

This is the case particularly in the developing world, where palm oil continues to supplant other oils thanks to its low price. India, for instance, has seen palm oil, at $694 a metric ton, displace more traditionally used oils, including sunflower (currently $832 a ton), rapeseed ($890), and groundnut ($1,876), especially by the food industry, which, as we know, tends to buy a refined, bleached, and deodorized version of the oil. “Even in developing countries, excess calorie intake is a concern, let alone in terms of composition of that intake,” said Dr. Qi Sun, an assistant professor of nutrition at the Harvard T.H. Chan School of Public Health. “In terms of palm oil, which is not healthy, I think the consequences could be devastating.” 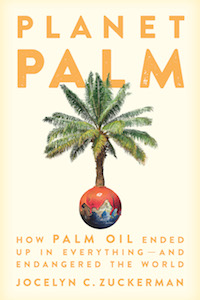 © Jocelyn C. Zuckerman. This excerpt originally appeared in Planet Palm: How Palm Oil Ended Up in Everything—and Endangered the World, published by The New Press. Reprinted here with permission.

Jocelyn C. Zuckerman is the former deputy editor of Gourmet, articles editor of OnEarth, and executive editor of Modern Farmer. An alumna of Columbia University’s Graduate School of Journalism and a former fellow with the Washington, DC–based Alicia Patterson Foundation, she has written for Fast Company, the American Prospect, Vogue, and many other publications. The author of Planet Palm: How Palm Oil Ended Up in Everything—and Endangered the World (The New Press), she lives in Brooklyn, with her husband and two children. 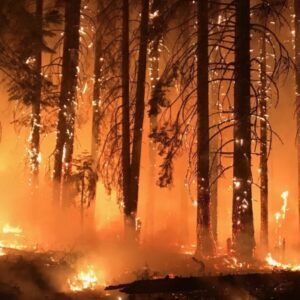 Here’s the bad news: you are being deceived every day, misled by people you should be able to trust—elected representatives,...
© LitHub
Back to top
Loading Comments...