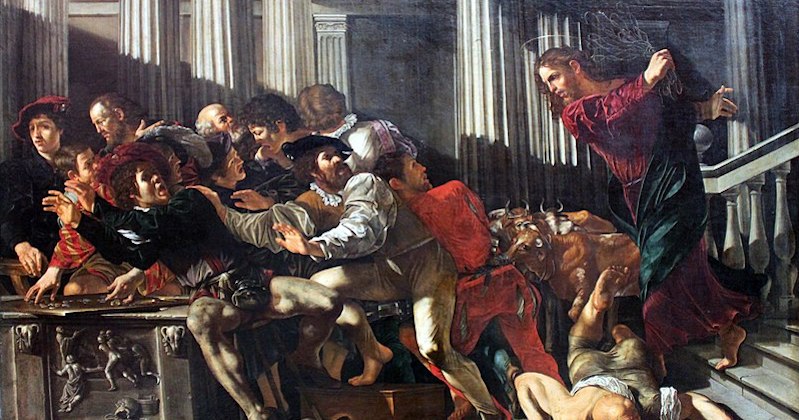 The Paired Narrative Trajectories of Christ and Cash

City-states expanded into empires, a political construct that proved particularly congenial to coinage. Masters of the mint could embed extraordinary depths of plot, character, and metaphor within these glittering microcosms. Coins could communicate puissance and power to the farthest reaches of a realm, but they could also point to the pathos of downfall and defeat, mirroring the emotional mix that forged one of the most stunning innovations in the history of storytelling: the birth of tragedy.

The ancient trade route between southern, central, and western Asia was known as the Grand Trunk Road. The city of Kandahar lies in the middle of this route, and 2,000 years ago was known for its ten varieties of apricots, its tender pale pink grapes, the strongest strains of Cannabis indica, and an abundant supply of white quartz crystals shot through with veins of gold. The kingdom was rich and the king was learned, wise, and holy. One day, he read a prophecy that shocked him.

The stars told him of a monarch much greater, mightier, wiser, more spiritual, and many times as rich as he, a ruler whose wealth would stagger the accounts of the greatest cotton and musk merchants from Chittagong to Kabul. So, being a pragmatic king, he ordered up a caravan, filled it with the gold of Kandahar, and headed west.

Along the way he ran into two other kings who had deciphered the same message in the sky and packed their own caravans with two of the other great luxury commodities of ancient times: perfume to anoint royalty and oil to embalm the dead.

It is no coincidence that the king of Kandahar’s name was Casper, descended from the ancient Chaldean word for treasurer. He was the oldest of the wise men, so had the honor of being the first to kneel before the newborn in the manger and the first to leave an offering. The gift was gold—because of gold’s purity, its power, and its perfection.

A rabbi himself, Jesus was well versed in the temple tradition of exchanging precious metal for precious blood.

Most likely, the Vatican still has it somewhere. Ever since the Middle Ages, the three kings’ visit to Bethlehem has been commemorated by the feast of the Epiphany, a sacred meal featuring a cake within which has been baked a trinket of some sort, traditionally a coin. The ritual meal is called king cake, and the prize within promises good luck, great fortune, and a share of equity in salvation.

The story of redemption promised by that coin came to a head in the time of Pontius Pilate. Every spring, more than two million Jews made the pilgrimage to Jerusalem to reenact through prayer, sacrifice, and ritual meals the Exodus from slavery unto Pharaoh in Egypt. Some modern historians estimate that each pilgrim spent the equivalent of three to four thousand dollars in today’s money during their journey, so that Passover in ancient Jerusalem generated revenues worth hundreds of millions of dollars.

One source of this revenue was the sale of sacrificial animals. Blood had marked the doors of the Hebrews as they escaped from ancient Egypt, so in order to celebrate one’s own symbolic Exodus, each devotee was required to ransom himself all over again through the blood of an animal. The pilgrims had to purchase a lamb that not only was alive, but certified kosher by the temple priests—that is, a beast perfect enough to be chosen then slaughtered. Which is to say that the priests in the temple of Jerusalem had cornered the market on Pesach.

When Jesus rode his donkey through the gates of the holy city on the first day of Passover two thousand years ago, Jerusalem was a Roman province, ruled by Roman coin. The silver denarius—the Roman reserve currency—was legal tender from London to Damascus. Despite the prevalence of the denarius, archeologists and numismatists have unearthed more than 45,000 different coins within the holy vicinity, from Greek assarionsto Syrian staters, solid-gold Egyptian oktadrachms, unstamped copper, lead blanks, and numerous counterfeit molds.

Which is no doubt why the priests had to carefully weigh, assay, and measure every shape, alloy, and denomination presented for exchange, as all the different incarnations of value had to be reduced to one sort of incarnation, the only kind that could purchase the blood of redemption, and that was the temple shekel. On temple grounds only temple money counted, not money melted and minted by Ethiopians, Iranians, Moabites, or any other apostate or apikoros.

A rabbi himself, Jesus was well versed in the temple tradition of exchanging precious metal for precious blood. He observed the pilgrims as they changed their native coins into temple coins, temple coins to temple animals, temple animals into holy blood, holy blood into a share of redemption. But there was something about the scene that set him off.

He overturned the tables of the moneychangers and the stools of those who sold pigeons, and said to them, “It is written in the Scriptures that God said, ‘My Temple will be called a house of prayer.’”

In a jealous rage, he lashed out against the only fiction that might prove to be as pervasive and powerful as he. Henceforth, Jesus decreed, the payment that mattered would not be made in denarii, oktadrachms, lamb’s blood, or temple shekels. The only currency that could recoup original sin, redeem our souls, ransom our captivity to gross materiality, and repossess the long-lost property in Eden would be his own blood.

The parallel between the life of Christ and the life of money was fully expressed in 1925, when an advertising executive named Bruce Barton published one of the best-selling books of the early 20th century, The Man Nobody Knows. The book was a guide to success in money and business in which the model capitalist was Jesus.

Barton began his professional life as a magazine journalist before hearing the call of advertising, a business in which the evidence of his success has endured. Not only did Barton create Betty Crocker, he came up with company names for both General Electric and General Motors, which indicated consistency of his branding philosophy, if nothing else.

Barton’s brand eventually made it all the way to the nation’s capital, where he served in the United States Congress representing the silk stocking district of Manhattan’s Upper East Side. But advertising and politics were mere preludes to his literary accomplishment, which articulated how the story of Jesus and the story of money were one and the same.

The titular Man Nobody Knows was Jesus—but not baby Jesus or Christ on the cross or the vengeful crusader on Judgment Day. The Man Nobody Knows was the redeemer as a public relations guru, brilliant copywriter, super salesman, hobnobber, and flesh pumper par excellence. The Man Nobody Knows understood how to get people’s attention and how to hold it. He was the prodigy who brought together 12 strangers, inspired them by invoking the powers of personal motivation and sacrifice for the sake of the team, and created the greatest corporation of all time.

He oozed charisma and leadership capability, but kept his eternally watchful eye on inventory and sales. He was a man’s man, he was the son of god, and he never lost sight of the fact that his kingdom was valuable real estate. He was Jesus the chief executive, and he knew his gospel had cash value.

While Barton may have been the most accomplished articulator of Jesus the capitalist, he was not the first. The knot of Christianity and commercial culture formed the bedrock of one of the most enduring American philosophical movements, summed up by the title of Andrew Carnegie’s 1889 essay, “The Gospel of Wealth,” which spearheaded the popular worship of the Protestant work ethic.

Televangelists understood that the plots of spiritual redemption and pecuniary redemption were virtually identical.

The American Baptist minister Russell Conwell summed it up  best in a speech he delivered more than six thousand times, in which he promised that a life of Christian virtue would bring “acres of diamonds.” “I say that you ought to get rich,” the reverend famously declared. “It is your duty to get rich.”

In a 1905 speech at the University of Chicago, John D. Rockefeller proves himself an acolyte. “I believe the power to make money is a gift from God,” he said. “I believe it is my duty to make money—and still more money.” The idea appeared to make a great deal of sense to vast numbers of people.

“By a fortunate dispensation, the virtues enjoined on Christians—diligence, moderation, sobriety, thrift—are the very qualities most conducive to commercial success.” That quote is from a magazine article that ran in The New Republic in the spring of 1924, expressing the sentiments of a generation to whom it had become apparent that a godly life would be compensated on earth as in heaven, that poverty was one step away from sin, and that the businessman’s credo of hard work and self-deprivation was an imitation of Christ.

“People are entitled to the rewards of their industry,” wrote President Calvin Coolidge. “What they earn is theirs, no matter how small or how great. But the possession of property carries the obligation to use it in a larger service.”

This new religion was called “prosperity theology,” and it would be taken to extremes not only by businessmen and politicians but by preachers such as Oral Roberts, who donned Italian silk suits, flaunted diamond rings and gold bracelets, and threatened suicide if his television ministry failed to raise the millions he demanded.

Roberts’s example inspired future generations of televangelists, and brought to American living rooms the gospel according to Billy Graham, Jimmy Swaggart, Joel Osteen, and Pat Robertson—whose holy ministry netted him more than $100 million. These men understood that the plots of spiritual redemption and pecuniary redemption were virtually identical, give or take a few technical terms, which may explain why the initial coin offering of a cryptocurrency known as “Jesus Coin,” despite being a hoax, attracted significant investment.

One reason why the gospel of wealth was believed by so many was that money was godly long before He rewarded the Pentecostal preacher Kenneth Copeland with a personal net worth of $760 million, long before Trinity Church’s real estate holdings in Manhattan surpassed $2 billion, and long before King Casper left a pot of gold for baby Jesus. Prosperity theology and “abundant life” theology are as old as ostrich egg beads, trophy wives, and kula. 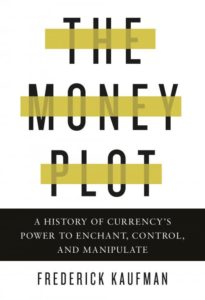 Excerpted from The Money Plot: A History of Currency’s Power to Enchant, Control, and Manipulate, published by Other Press on November 24, 2020

Frederick Kaufman, an English professor by training and profession, has for the past decade focused his attention on the fiction that is money. His unorthodox insights into the ways of Wall Street have resulted in numerous magazine articles for publications ranging from Scientific American to Wired to Foreign Policy to Harper’s, as well as television appearances on NBC, Bloomberg, Fox Business Network, and Democracy Now!, and invitations to lecture in both the United States and Europe, including an address to the General Assembly of the United Nations. The Money Plot is his fourth book. 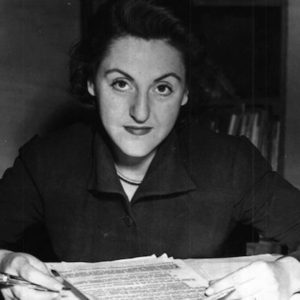