Dava Sobel in Praise of a Great Environmentalist, Writer, and American

When I first heard about the shooting, I felt only horror, the same as everyone else. But my second thought was regret that the bloodshed of February 14 in Parkland, Florida had tied the name Marjory Stoneman Douglas to the violent deaths of teenagers and teachers. She had long been better known as a gifted writer and environmentalist who campaigned most of her 108 years—from the 1920s through the 1990s—for the preservation of the Everglades.

One of the first things I asked when I met her in 1991 was how she had managed to hold fast to her goals when it seemed she might never prevail. She answered with a question of her own: “Why should I give up?”

At that time she was the only surviving member of the original 1927 committee to put the Everglades under National Park Service protection. She remained a champion of all the flora and fauna there, though she had never spent much time on site. “It’s too buggy,” she said, “too wet, too generally inhospitable—the sawgrass would cut you to pieces—for camping or hiking or the other outdoor activities which naturalists in other places can routinely enjoy.” Still, on her infrequent visits over the years she had witnessed the nuptial flight of the white ibis, fed marshmallows to alligators, and walked close enough to a rare Florida panther to see the shadows of its whiskers.

“I know it’s out there and I know its importance,” she said of the park and its environs. “I suppose you could say the Everglades and I have the kind of friendship that doesn’t depend on constant physical contact.”

Instead of communing with the Glades, Mrs. Douglas spoke for them in tireless efforts at public education, from her position as founder (in 1969) and first president of the group she named “Friends of the Everglades.” Time and again she rescued the Glades from plume hunters who ransacked the rookeries for the millinery trade, from developers who wanted to erect bridges, suburbs, and even a jetport on the marshes.

While some environmentalists defended this or that endangered species of waterbird, Mrs. Douglas espoused a radical view: “It’s the whole thing that’s got to be preserved,” she said. She divined the true character of these wetlands as a river, not a swamp, and gave the place its enduring epithet in the title of her 1947 book, The Everglades: River of Grass.

“There are no other Everglades in the world,” she wrote.

They are, they have always been, one of the unique regions of the Earth, remote, never wholly known. Nothing anywhere else is like them: their vast glittering openness, wider than the enormous visible round of the horizon, the racing free saltness and sweetness of their massive winds, under the dazzling blue heights of space… The miracle of the light pours over the green and brown expanse of sawgrass and of water, shining and slow-moving below, the grass and water that is the meaning and the central fact of the Everglades of Florida. It is a river of grass.

For all the poetic loquacity of her writing, she spoke in the clipped phrases of the “damn Yankee” she professed to be, even after 75 years in Florida. Born in Minneapolis in 1890, she was raised in New England and educated at Wellesley College. Her terseness, neither impolite nor impatient, struck me as a form of personal conservation, as though she were saving her own energy for the work at hand. At 101, she was still writing her biography of W.H. Hudson, meeting with federal officials, and consenting to every public appearance, every requested photo session or television taping, out of a sense that her small, frail body remained a powerful instrument for swaying public opinion to her cause.

“If she were alive today, she would surely be cheering on the Parkland students for the strength of their determination.”

Despite her advanced age and the respect she commanded, people tended to call her by her first name, and she did not object. New acquaintances, even strangers recognizing her in the restaurant where I took her to dinner, were immediately on a first-name basis with her. Lawton Chiles, then governor of Florida, had recently decreed her birthday, April 7, to be the start of a two-week statewide celebration of environmental awareness called “Plant a Tree for Marjory.”

She had shown an early sympathy for nature, as she related in her autobiography, Marjory Stoneman Douglas: Voice of the River:

Upstairs in the sitting room, father read to me, mostly from “Hiawatha.” When he came to Hiawatha building the canoe and saying to the birch tree, “Give me of your bark, oh, birch tree,” and the birch tree sighing and bending over to give up its bark, he was astonished by the fact that I burst into loud sobs. I couldn’t make him understand I was sorry for the birch tree, because why should the birch tree have to give up his bark just because Hiawatha wanted to build a canoe? I couldn’t stand it. I cried and I guess father skipped the canoe part after that.

But it wasn’t love of the wilderness that brought her to South Florida in 1915. She came to get a divorce from the enigmatic Kenneth Douglas, a writer 30 years her senior whom she’d married in 1913, and also to be reunited with her father, Judge Frank B. Stoneman, editor of the Miami Herald, whom she hadn’t seen for 20 years.

Judge Stoneman was already stumping for the preservation of the Everglades before his daughter arrived. Many Floridians then viewed the Everglades as a snake-infested swamp that would benefit from nothing so much as a thorough draining. He spoke out against draining in his editorials. One imagines, from Marjory’s description of him, that Frank Stoneman valued the Everglades for their mere existence and their sheer beauty. For their right to be. And in this she wholeheartedly agreed with him.

As it happened, a job soon opened for Marjory at the Herald. She had always wanted to be a writer, had written in high school and majored in English composition in college, but it took the society editor’s sudden departure to land Marjory in her dream career.

In 1916, during the First World War, she was assigned a story on the first female enlistee from Florida in the Naval Reserve.

“Look,” she telephoned her father to say “I got the story on the first woman to enlist. It turned out to be me.”

“I admire your patriotism,” he replied, “but it leaves us a little short-handed.”

Finding herself “overqualified for yeoman work in the Navy,” she put in for an early honorable discharge and then served overseas in France with the American Red Cross.

“That book, which she wrote out in longhand before hiring a typist, brought her great acclaim and united her name with the Everglades forever.”

Back in Florida in 1920, and again writing for the Herald, she was given her own column, “The Galley.” An editorial she wrote in verse, expressing her outrage about a young man who was arrested for vagrancy and then beaten to death in a labor camp, convinced the state legislature to abolish beatings in the camps. Another cause she wrote about in her column was the need to make the Everglades a national park.

When the work and the pressure of newspaper reporting proved overwhelming, she turned to short story writing for magazines such as the Saturday Evening Post. She set some of her stories in and around the Everglades, and never lost interest in them over the 15 years she worked as a full-time freelance writer. “Pineland,” published in the Post on August 15, 1925, begins:

All around them the white brilliance of the Florida moon poured down upon the uneven road from the burial place, caught on the bright spear points of palmettos and struck into nakedness the shabby houses among stumps of pine trees of this outskirt of Miami. The light and the hot wind seemed whiter and hotter for the figure of Sarah McDevitt in her mourning.

Marjory was six months into a novel when the opportunity to write the book about the Everglades arose through her friendship with Hervey Allen, an editor at Rinehart. He invited her to contribute to a series of books about the rivers of America, and suggested the Miami River. She protested that it was “only about an inch long.” The Everglades, on the other hand, were somehow connected to the Miami River, and would no doubt make a richer story.

“Do you think I could get away with calling it a river of grass?” Marjory asked the state hydrologist, the first expert she consulted in her research. He said she could.

“The water moves,” she wrote.

The sawgrass, pale green to deep-brown ripeness, stands rigid. It is moved only in sluggish rollings by the vast push of the winds across it. Over its endless acres here and there the shadows of the dazzling clouds quicken and slide, purple-brown, plum-brown, mauve-brown, rust-brown, bronze. The bristling, blossoming tops do not bend easily like standing grain. They do not even in their growth curve all one way but stand in edged clumps, curving against each other, all the massed curving blades making millions of fine arching lines that at a little distance merge to a huge expanse of brown wires, or bristles or, farther beyond, to deep-piled plush. At the horizon they become velvet. The line they make is an edge of velvet against the infinite blue, the blue-and-white, the clear fine primrose yellow, the burning brass and crimson, the molten silver, the deepening hyacinth sky.

The book is not just a celebration of nature but a detailed chronicle, from the lethal skirmishes between Native Americans and European settlers in the Glades to the later struggles of the wetlands wildlife against the onslaught of dams, drainage and drought.

That book, which she wrote out in longhand before hiring a typist, brought her great acclaim and united her name with the Everglades forever. Two decades after its publication she and another acquaintance, Joe Browder of the National Audubon Society, hatched the idea for an organization that would take a stand for the Everglades. Within a year the Friends of the Everglades had 500 members, and the ranks eventually swelled to thousands.

In 1993, two years after I met her, Marjory was awarded the Presidential Medal of Freedom, with a citation recognizing her as “An extraordinary woman who has devoted her long life to protecting the fragile ecosystem of the Everglades, and to the cause of equal rights for all Americans.”

If she were alive today, she would surely be cheering on the Parkland students for the strength of their determination. At 10 am, today, April 20, 2018, they will again lend her name to their cause as they honor the victims of the 1999 Columbine shooting by walking out the doors of the Marjory Stoneman Douglas High School. They are the country’s newest river, surging forward, rising.

Dava Sobel is a journalist and writer whose nonfiction books include Longitude, Galileo's Daughter, and The Glass Universe. 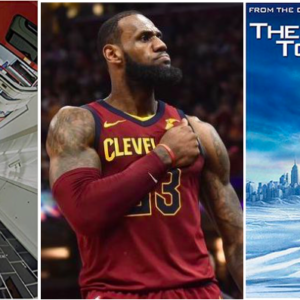 Have you ever started a book and felt, more or less instantly, that it was, and actually had always been, one of your favorites?...
© LitHub
Back to top