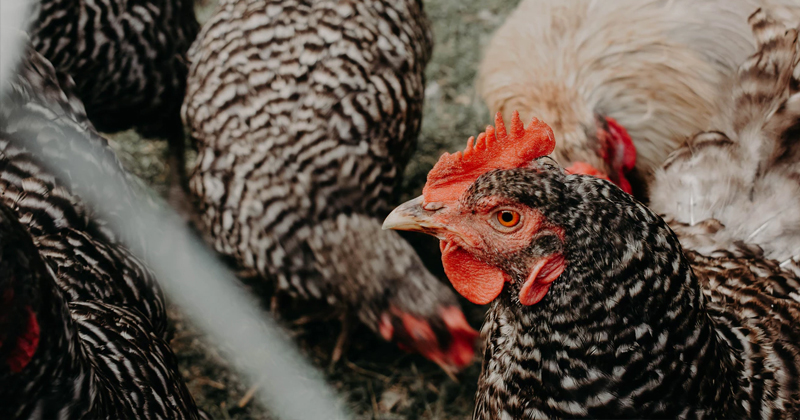 On the Long Debated Origin Story of Domestic Chickens

Gina G. Warren Considers the History of the Backyard Bird

The origin story of domestic chickens has been long debated. In 1868 Charles Darwin claimed that chickens descended from red junglefowl around 4000 BCE in the Indus Valley in South Asia. This opinion was tenacious, but inaccurate. Rather than originating from a singular species, time, and place, chickens drew their genetics from a combination of red and gray junglefowl and were domesticated throughout Asia at different periods. While chicken bones have been found at various archaeological sites through South and Southeast Asia and Southwest China, the oldest chicken bones ever uncovered hail from northern China.

It also seems quite likely that the egg came first. Writing for Time magazine, Merrill Fabry said as much: “At some point, some almost-chicken creature produced an egg containing a bird whose genetic makeup, due to some small mutation, was fully chicken.” Although the question seems silly and the answer bizarre, that’s how changes in species occur. The egg that became a chicken, most likely from two non-chicken organisms, was, as Bill Nye stated on Twitter, the “result of proto-chicken & proto-rooster hookin’ up. It’s evolution.”

For thousands of years chickens were used symbolically and socially: they were employed in rituals, buried whole, and baited against one another in cockfights but neither stewed nor grilled (or if they were, it was relatively rare). From Southeast Asia and China, chickens were brought westward, where they spread into West Asia, the Mediterranean, and Europe. The Lex Fannia Sumptuaria of 161 BCE, one of the sumptuary Roman laws (laws passed to regulate consumption and luxury), banned the consumption of more than one chicken per meal and prohibited them from being artificially fattened, presumably for the sake of preventing unnecessary extravagances, although the laws were far more symbolic than actual. Roman priests used chickens to divine the future: If a chicken voraciously ate grain and scattered it with its feet, the omen was good. If the chicken didn’t eat, the omen was bad (it should be mentioned that chickens were often caged without food before the ritual, so the methodology was incredibly suspect no matter how superstitious you might be).

The chicken’s turn toward food appears to have taken place in the biblical city of Maresha, Israel. Around 400 BCE, it seems people began eating chicken en masse for the first time. While chicken remains in other sites were often found intact, the bones of chickens in Maresha were scraped and rutted with knife marks from butchering. This moment over 2,400 years ago was a fundamental shift in the relationship between humans and chickens; today, chicken is the most-consumed protein in the United States. The public image of chickens has, arguably irreparably, shifted from prophetic to palatable.

It also seems quite likely that the egg came first.

Americans used to be comfortable with the idea of raising their own chickens for eggs and meat. It wasn’t uncommon to keep a small flock in your backyard for eggs and slaughter them for dinner when their productive abilities decreased. Throughout the 19th and early 20th centuries in the United States, households, not companies or farms, produced the majority of chicken meat. People with average means and space in their backyards—not employees earning paychecks and reporting to managers—did all the raising, handling, feeding, egg-collecting, caring for, killing, plucking, and eviscerating and created a direct connection between animals and food. The idea that slaughter isn’t something everyone at a chicken-laden table should know how to do is a somewhat modern concept, spurred on by industrialization and capitalism in the late 19th and early 20th centuries.

As societies became more industrialized, beliefs about how humans should interact with animals shifted. Laws changed, animal production was sequestered away from urban housing, and cultural expectations concerning metropolitan life were altered. Spaces became increasingly divided between life and work, implicitly characterizing things like physical labor and animal husbandry as emblematic of rural environments and antithetical to urban ones. The terms production and consumption became similarly oppositional, and the pervasive idea that metropolitan areas were civilized centers and animals degraded the quality of life this image promised spread like blood in water. Animals were seen as dirty and indicative of immigrant neighborhoods or lower-class housing: it must be need, the slanderous logic went, that would drive a worker in the postindustrial world to raise their dinner rather than buy it from a store.

In the 1920s the US Supreme Court decided to uphold the legality of municipal powers to regulate land use, which allowed local control of chicken husbandry practices. In the period of urban sprawl following World War II, restrictions further cemented the idea that urban and rural spaces should be kept separate. Today, regulations still limit chicken ownership for many Americans, especially those in urban areas or who live on smaller lots.

As food became more industrialized, prices dropped. This trend had to do with supply, for the boilers that were produced in factories and commercial farms during the second half of the 20th century were far more tender and palatable than the backyard hens of yesteryear with their thin bodies and tough, developed muscles, but this shift also had to do with convenience. Young, rapidly grown chickens take less time to cook, and the availability of individually wrapped legs, breasts, thighs, or wings was increasing since butchers weren’t purchasing and then carving whole birds. The idea of eating meat offends some, but not nearly as many as those who are offended by the idea of killing a live animal. It seems like people at some point stopped slaughtering, and then forgot how to slaughter, their own meat.

Traces of this forgetting can exist in pockets of the backyard chicken movement, even as the practice of raising chickens draws people closer to food production. Leslie Citroen, a businesswoman and chicken owner living in California, turned her backyard hobby into a full-fledged business that sells fancy and heritage breed chicks. She works with upscale wineries, charges thousands of dollars for custom coops, and stocks accessories like egg stamps, chicken harnesses and tutus, and hand-painted custom coop signs. She believes that backyard chickens are on the rise because people are becoming more informed about where their food comes from, but there’s an invisible line that most are unwilling to cross.

It seems like people at some point stopped slaughtering, and then forgot how to slaughter, their own meat.

One afternoon when I visited her sunny, chicken-filled backyard, she told me that people often think “it’s better to buy it [chicken meat] in a package in the supermarket, while it’s a shameful thing to kill your pet.” Although chicken meat is consumed on a wide scale and urban chickens are growing in popularity, most backyard chicken flocks in the United States are kept for eggs only. People want to grow their own vegetables, get their own eggs, make things that are organic and wholesome and from scratch, but only if it doesn’t involve bloodshed. According to a 2014 study by researchers at University of California, Davis, chickens are more likely to be “pets,” “gardening partners,” and “therapy tools” than they are to end up on the table. Eggs are first and foremost in chicken owners’ minds, and they generally leave the messier side of chicken consumption to industries.

While 21st-century chicken keepers don’t generally raise their birds for meat, they do incorporate some traditional values like frugality, self-sufficiency, and hard work. Dianne, who raised chickens for almost 24 years in Oregon, says that her chickens provide her with the “best” free fertilizer for her “massive” garden. Angela, who started her own small-scale mealworm farm for her chickens, mixes and ferments her own chicken feed. “I’m a very do-it-myself sort of person,” she told me. “I believe in real food.” Ryan, who spent parts of his childhood in rural South Dakota, brought chickens into his California home after his family began gardening. “We grow lots of vegetables in the summer, and with the help of our extra freezer, they last well into winter,” he said when we talked over coffee one morning, months after I met him on a Silicon Valley coop tour. “We do a winter garden too, and chickens just kind of seemed to be a natural extension of our backyard farm.” People like Ryan prove that food production can be enmeshed into the space and daily lives of people who are farmers not by trade but by hobby.

Neighborhoods and cities have different and individualized livestock laws, most of which seek to limit the number or feasibility of backyard chickens. A 2012 survey of municipal backyard poultry laws by Jamie Bouvier, assistant professor of lawyering skills at Case Western Reserve University, revealed that out of the hundred most populous cities in America, 71 regulate chicken ownership with animal control ordinances while fourteen use zoning codes. Only three of the cities in the study banned chickens outright, but most cities—56 out of 100—have some kind of regulation that dictates how far chickens must be kept from neighboring residences.

Thirteen cities incorporated setbacks of one hundred feet, which effectively ban chickens for most residents, and seven cities incorporated setbacks of over a hundred feet. A 2015 study by researchers at Boston University and George Washington University revealed that out of the 150 most populated cities in America, 93 percent allowed chickens in some capacity.

Regardless, people like Ryan can work around regulations. Backyard chickens are still on the rise, partially because the style of living they exemplify rebels against modern metropolis ails. In the wake of stresses about increasing urbanization, environmental collapse, GMO foods, and kids growing up with their fingers on screens instead of in the dirt, chickens are an all-inclusive reprieve. Chicken people tend to have concerns about the environment, industrial food, and the economy of commercial agriculture. By owning chickens, they perform a feat of micro-resistance against society’s dominant forms of consumption and production and create a counter-narrative to the story that food, something we all require on a daily basis, can only be produced by certain industries in sequestered places. 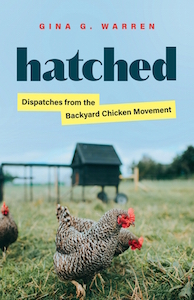 Excerpted from Hatched: Dispatches from the Backyard Chicken Movement by Gina Warren (University of Washington Press, May 2021).

Gina G. Warren writes about animals, the natural world, and human relationships for publications such as Orion, Creative Nonfiction, and Terrain.org. She raises a flock of two dozen chickens in her South Louisiana backyard. Hatched: Dispatches from the Backyard Chicken Movement is her first book.