Lewis Hyde Explores the Egoism of Memory and Self-Making

FEED ON THE PRESENT. Larry Rosenberg, a dharma teacher from the Insight Meditation Center in Cambridge, Massa­chusetts, tells of the time he was in New York City with a free afternoon and his wife suggested that they visit the Tenement Museum, on Manhattan’s Lower East Side. Untouched for over 50 years, the museum’s apartments present preserved exam­ples of the housing offered to immigrant families in the early 20th century. Rosenberg himself had been born and raised in a similar building in the same neighborhood and found him­ self unexpectedly transported into the past.

“Suddenly certain things started to come back to me about my past, and I couldn’t talk for quite a while.” Asking himself, “Did I come out of this? Did I grow up here? How can that be?” he was mostly struck by the great distance between the life he had come to live and that long­-ago childhood. “Seeing the size of what was called the bathroom, which was more like a telephone booth—no bathtub, no shower, et cetera. And my memories of living with my parents, my mother’s three sisters and brother, and both my grandparents in a space like this.”

Rosenberg told this story in the context of a talk about a distinction he draws from Buddhist teaching between “real time” and “psychological time.” With real time, we do not dwell on (or dwell in) the past or the future but simply note them (saying, “I grew up in New York” or “When I retire I’m going to Florida,” and so on). With psychological time, on the other hand, past and future take over the present; we live in them, identifying with their pleasures and pains. As the Bud­dhists say, we “make self” out of them (as I might make self out of my pride in publishing a book or my shame over having flunked a chemistry exam).

In Rosenberg’s case, what struck him in this regard was not the Tenement Museum itself but the way his account of the visit changed over time. At first it had been a bare experience. It “sort of opened me up, and I saw something about my ori­gins and a sense of myself. . . . Right on the spot I was quiet. I didn’t want to talk for a while. I was very moved by it. Some of it was painful, a lot of it was pleasant, but . . . it conveyed to me the distance I had traveled, socially, psychologically.”

Later, however, when he got home and recounted the story to various friends, “the telling started to change a bit, from it just being a straight report of a fact and what I went through. I saw that it was promoting the self. What it was saying was, ‘Aren’t I wonderful! I started here, and then I was a professor, and I dropped out, and now I’m a dharma teacher, and I know how to dress—I’m a real American guy!’” The story had picked up self-­importance along the way; “there was some mileage coming from it.”

The Chinese have been diligently trying to wipe out the Tibetan language and culture, making it impossible for young Tibetans to study their own history, especially their religious heritage.

Rosenberg is clear that this kind of self­-making may be un­avoidable and often harmless, but as a matter of Buddhist practice it should at least be noticed, be brought to mind. “I saw what the mind was doing; the mind was taking materials from the past—at first they were just ‘factual’ but then it im­mediately started to use them for the present, the present sense of myself. . . . The self is constantly using the materials of the past and the future to nourish itself, to build itself up. . . . I didn’t do it consciously. . . . It just happened. The ego is going to work, and that’s what it knows how to do.”

Rosenberg likes to use a food metaphor to describe how the ego functions: it feeds on the past and the future. There is a Buddhist scripture from the Pali canon, the Samyutta Nikaya, that says of practitioners who are “peaceful in mind,”

They do not lament over the past,
they yearn not for what is to come,
they maintain themselves in the present,
thus their complexion is serene.

In Rosenberg’s own reading of these verses, the third line be­ comes “they nourish themselves in the present.” Such is the food of a serene self-­forgetfulness. Self-­making, on the other hand, feeds on time past and time to come. “The continuation of psy­chological time and the survival of the ego are really the same thing,” says Rosenberg.

CHANGES OF IDENTITY. “Forget your past, your customs, and your ideals,” reads a Yiddish guidebook printed in Odessa and given to Jews on their way to New York in the 1890s. The waters of the river Lethe feed directly into the oceans surround­ing the American continent. Americans have always claimed the right to reinvent themselves, and all changes of identity call for strong doses of forgetfulness. Emerson’s “Self­ Reliance” stands as one of our earliest odes to forgetfulness in the service of a shifting self: “Why drag about this corpse of your mem­ory, lest you contradict something you have stated in this or that public place? Suppose you should contradict yourself; what then? It seems to be a rule of wisdom never to rely on your memory alone . . . but to bring the past for judgment into the thousand-eyed present, and live ever in a new day.”

The transcendentalists wrote their own guidebooks to the New World, eager as they were to forget European culture and establish their own. “The Atlantic is a Lethean stream, in our passage over which we have had an opportunity to forget the Old World and its institutions,” wrote Henry Thoreau in a typical passage. “If we do not succeed this time, there is perhaps one more chance for the race . . .  and that is in the Lethe of the Pacific, which is three times as wide.”

IN TIBET. In 2000, The New York Review of Books carried a re­port by Ian Buruma about his trip to Tibet. The Chinese have been diligently trying to wipe out the Tibetan language and culture, making it impossible for young Tibetans to study their own history, especially their religious heritage. Their efforts are a species of the “organized forgetting” that Milan Kundera de­scribed in regard to Soviet propaganda in Eastern Europe.

To “look to the interests of others” means to forget about the self that knows itself in opposition to those others. The passage is commonly read as a teaching: self­-emptying is the cure of pride.

And yet Buruma meets a Tibetan Muslim in a restaurant for whom religion has a different meaning: in the past, as in Myanmar more recently, the Buddhists, intent on maintain­ ing their own purity, had persecuted the Muslims such that they and Tibet’s other religious minorities view Buddhism with a sense of unease.

This Muslim turned out to be the only Tibetan with whom Buruma spoke who didn’t care about the diminishment of the Tibetan language “or the new dominance in urban areas of Chinese low life and pop culture.” This man spoke “like a true modernist. It was inevitable, he said, that traditions were hol­lowed out by modern life. . . . The crude new cosmopolitan­ism of Lhasa was . . . part of his liberation.”

The story echoes that “forget your traditions” advice given to America’s immigrant Jews. It seems to promise a secular, plu­ralist state that welcomes the forgetting of difference and its consequent fluid identity. In this case, it’s a false promise, of course, a swapping out of one set of differences for another, of a purely Buddhist agenda for a purely Communist one.

“KENOSIS” means an emptying out, as in Saint Paul’s charge to the Philippians: “Let each of you look not to your own inter­ests, but to the interests of others. Let the same mind be in you that was in Christ Jesus, who, though he was in the form of God, did not regard equality with God as something to be exploited, but emptied himself, taking the form of a servant, be­ing born in human likeness.”

To “look . . . to the interests of others” means to forget about the self that knows itself in opposition to those others, which is to say that the passage is commonly read as a teaching: self­-emptying is the cure of pride. In that line, one point of some earlier pages of this book about my parents was to say that they were the kind of people who took pride in their literacy, their mastery of tools, and their intelligence, and that they passed all of that along to me. With such pride comes identity—identity through difference. “I” am “I” because I am not one of those “others” who’ve never read Proust, who never repaired their own television set, who never made it to the Ivy League.

If such difference amounts to self­-elevation, then kenosis calls for descent into some humbler form. On the other hand, but just as important, if difference amounts to self­-debasement (“I” should be ashamed!), then kenosis calls for a move in the opposite direction, an emptying out of servitude and assump­tion of some less marked way of being. Either way—proud or ashamed, high or low, master or servant, literate or illiterate, smart or dumb—this emptying finally means letting go of all such oppositions. The crossroad where dualities meet and cancel each other out—that is the site of the self-forgetfulness whose consequence is the death of identity by difference. Concludes Saint Paul, “Being found in human form, [Jesus] humbled himself and became obedient to the point of death—even death on a cross.” 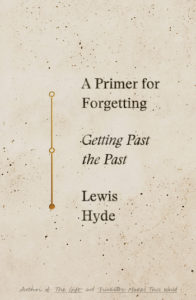 Excerpted from A Primer for Forgetting: Getting Past the Past by Lewis Hyde. Published by Farrar, Straus and Giroux, June 18th 2019. Copyright © 2019 by Lewis Hyde. All rights reserved.

Lewis Hyde is the author of Trickster Makes This World: Mischief, Myth, and Art and The Gift: Creativity and the Artist in the Modern World, as well as a book of poems, This Error Is the Sign of Love. 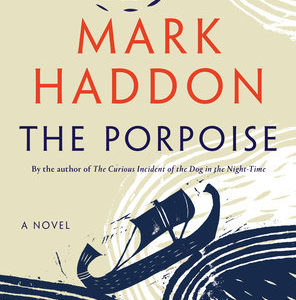 They enter the city proper at Cripplegate and walk south down Little Wood Street. It seems to George like any other London...
© LitHub
Back to top
Loading Comments...