On the Importance of the Public School Novel, Right Now

Moving Beyond the Prep School Canon

When incoming Secretary of Education Betsy DeVos entered the nomination process, supporters of public schools weren’t happy. DeVos is a billionaire who never earned an education degree, has never taught at any level, has never attended a public school, and has never sent her children to a public school. She supports charter schools and vouchers, and has been critical of public school education. In response, public school graduates like ESPN director Billy Corben have tweeted their appreciation for the teachers and schools who “helped make me the man I am.” He was joined by fellow graduates like Josh Groban, Justine Bateman, Patton Oswalt, and a legion of others who feared for the future of public high schools.

We often write fiction about years full of wounds and wonder, so there is no shortage of great high school novels. A Good School by Richard Yates is set at Connecticut’s Dorset Academy, among confident boys “turbulent with talk and laughter” and “just the right note of insouciance.” Against the backdrop of “wartime discipline,” their horseplay soon becomes assault, and they seek to escape “alone in the darkness” of their rooms, where William Grove “lay wondering how he was going to live the rest of his life.”

Yates’s novel pairs well with A Separate Peace by John Knowles, also set during World War II, in New Hampshire’s Devon Academy. There Gene Forrester “felt fear’s echo” along with the “unhinged, uncontrollable joy which had been its accompaniment and opposite face.” Such mood was captured in Old School by Tobias Wolff, placed in the early 1960s at a very literary-minded Northeastern boarding school, where visitors include Robert Frost and Ernest Hemingway. English teachers are Gods, and “even boys without bookish hopes aped their careless style of dress and the ritual swordplay of their speech.”

Blue van Meer, the book-loving narrator of Marisha Pessl’s Special Topics in Calamity Physics, attends St. Gallway School in North Carolina, where one teaching assistant is described as having a “cornbread complexion and habit of swallowing right in the middle of a word.” Blue is precocious, clever, and despite wearing “fuzzy sweaters in yellow and pink” and her hair fixed into “a very upbeat ponytail,” she careens down the typical high school “descent into grimdom.” Blue recalls Lee Fiora, an Indiana girl who boards at the Ault School in Massachusetts in Prep by Curtis Sittenfeld. There, morning roll is called “in an enormous room with twenty-foot-high Palladian windows, rows and rows of desks with hinged tops that you lifted to store your books inside, and mahogany panels on the walls—one for each class since Ault’s founding in 1882—engraved with the name of every person who had graduated from the school.”

Jeffrey Eugenides’s The Virgin Suicides perfectly captures Catholic suburban Detroit, where boys lust over the beautiful but mysterious Lisbon daughters. Their father “had been a teacher [at the high school] so long he had a sink in his room.” Although not a prep school, the talk of a headmaster and a convocation ceremony suggests a private school setting. And we can’t forget about Pennsylvania’s Pencey Preparatory Academy in J.D. Salinger’s The Catcher in the Rye, where boys are molded “into splendid, clear-thinking young men”—not including Holden Caulfield.

All memorable books, yet they tend to be homogeneous: WASPy, wealthy, and insular—both economically, as well as through the cultural nature of the prep, boarding school mentality. Of course, this does not devalue them as novels, but it does reveal a curious trend that has continued to the present. In 2015-2016, 3.1 million students graduated from public high schools, while only 314,000 graduated from private schools. Why are so many lauded books about high schools set in elite locations? Where are the great novels set in public schools?

Young Adult public school novels are legion. We need more novels for adults written about those messy public school years of joy and pain. Megan Abbott is one of the best at writing about those “monumental” teenage years, what Abbot calls “the moment girls develop desire.” Dare Me begins during those years when “a girl needs something to kill all that time, that endless itchy waiting, every hour, every day for something—anything—to begin.” A new cheerleading coach arrives, and “she’s just tighter, fleeter than we’d expected.” The girls “can’t fluster her, and we are surprised,” because they can get under anyone’s skin: the “sad parade of straw-man subs, dusty-shouldered geometry teachers and crepey-skinned guidance counselors.” She’s the drama they want but don’t really need—and Abbott so skillfully captures the highs and lows of those moments.

The Fever takes place at Dryden High School, where girls suffer from mysterious seizures, their vibrating desks and snarling words upsetting more than simply the concentration of fellow students. The seizures first arrive during “the deep white empty of February” when “students would get that morose look, their faces slightly green like the moss that lined all their basements.” Abbott channels the powerful intersection of boredom and mystery, of the mundane and the frightening.

James Boice’s NoVa, another book steeped in public school life, begins with the tragic image of 17-year-old Grayson Donald, hanging “from the chipped orange rim of a basketball hoop.” Grayson had gone from Catholic school to northern Virginia’s public Braddock Park High School. Boice lingers on Grayson’s body for a painful amount of pages—his prose packed to the margins of the page, no breaks of paragraphs or white space—as if to force us to consider what we so often conveniently ignore: the frailty of the teenage body and soul.

A recent novel, The Most Dangerous Place on Earth by Lindsey Lee Johnson, breathes further life into this much-needed genre. Although Johnson’s novel is set at a wealthy public school, there is more economic stratification than the typical prep school novel—and its dramatic conflicts of cyberbullying and shame transcend the campus. The main “adult” character of the novel, teacher Molly Nicoll, comes from impoverished Fresno, offering readers a lens through which to interrogate the wealth and privilege of these students, their families, and the broader community.

Johnson’s novel, set among wealthy families in Marin County, California, begins in 8th grade, with a note “folded into impeccable quarters.” Cally Broderick hopes for the “hurried scrawl” of her crush, Ryan, and not the real writer: the frail, bullied Tristan Bloch. His expansive, gushing letter ends with a proclamation of love. She immediately shows the note to her friend Abigail, and soon Ryan sees it—leading to ruthless attacks on Tristan, online and off. The shaming ends with a tragedy: Tristan commits suicide by jumping off the Golden Gate Bridge.

Johnson jumps from 8th grade to junior year, with the arrival of Molly, a young, inexperienced teacher only seven years older than her students. This is a privileged bunch—when asked “What are some things that one would aspire to achieve or attain” as part of the American Dream, they respond “A Lambo” and “A private jet!”—and Molly doesn’t know how to handle them. She’s about to learn. The students who were a part of that 8th

grade tragedy are now older, and still full of secrets. Abigail is having an affair with her English teacher, but as rumors begin to swirl, they split—and he gravitates toward Molly. Molly knows that she is making mistakes in and out of the classroom, but she just wants to fit in.

Isn’t that what the weird, wild world of high school is about? The painful desire to find a home, and to form an identity. Kids who go to private and public schools are the same. They are burdened and blessed with hormones, plagued by homework, embarrassments, and cliques. Yet most students in America do not go to boarding schools in other states, nor do they sit in classrooms funded by the donations of generous millionaires. Most American children go to public schools: aging institutions where the hopes, dreams, and struggles of our educational system live side-by-side. Let’s write their stories. 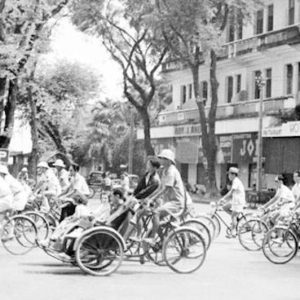 The biggest lie in travel—greater than “For you my friend a special deal”—is “Every place now looks the same.”...
© LitHub
Back to top