From The Shining to the Election, and the Things That Scare Us Most

How can we be afraid of something as quiet and compact as a book—a thing that can’t make sudden movements, scary noises, or impersonate Jack Nicholson? That’s the question that hangs over horror, which began with the novel but thrives on the screen. In a famous essay from 1979, the film scholar Robin Wood offered a “simple definition” of horror movies as our “collective nightmares.” The insight will hardly surprise if your dreams still plagiarize The Ring. But Wood was trying to unriddle horror—to understand why we watch movies that make us avert our eyes. Horror, Wood argued, derives from the enchantment of film itself, which unearths our psyches and engulfs us like a dream. If films like Psycho and Rosemary’s Baby dramatize our unconscious, then B-movie slashers monetize our ids.

There are few waking experiences that can rival the rapturous quality of movies, which captivate us by commanding sight and sound. Books, by contrast, wield a softer power on our imagination. But Wood’s cinematic definition of a nightmare feels curiously dated this Halloween, which happens to coincide with the collective nightmare of the presidential election. Donald Trump is a monster that presides over media, not movies. And it’s his language—his grotesque brand of political rhetoric—that horrifies us. Unlike film, books have to scare us with the lights on—and so might better suit a Halloween in which our scariest monsters also walk around in the daytime. In a month of “locker-room talk,” horror novels remind us that language can still horrify us enough to matter.

Good writing “gets under your skin, in your bones,” and “lives in your ear,” wrote Hilton Als last month in The New Yorker. He was speaking of the bodily experience of verbal genius, in honor of the late Edward Albee. But you could turn that lovely sentiment on its head, and say that good writing—especially the scary kind—inhabits us like a parasite, a body-snatcher, a curse. We experience every horror novel as its own kind of body-horror, a bad spirit we harbor in our guts.

But creepiness that lives in the body also lingers in the daytime, and a great horror novel is something worse than a collective nightmare. It feels more like a bad lucid dream—a netherworld we can’t quite wake from because we’re already awake. One such novel is Stephen King’s The Shining, a very scary book that, by most accounts, produced an even scarier movie. In both versions, the protagonist (and villain) is Jack Torrance, a writer, recovering alcoholic, and disgraced schoolteacher harboring hopes of repairing his life. With his family in tow, Torrance moves into an elegant resort in the Colorado mountains called the Overlook, where he has come on as caretaker for the hotel’s off-season. His idea is to turn the Overlook into a makeshift rehab and writing retreat, where the remote, snow-bound location will isolate him from alcohol and the reminders of his failures. Thus unburdened, he’ll finally be able to write.

The novel, unlike its adaptation, lingers on these themes of addiction and ambition.

Jack believes that writing, if done well, will sober, soften, and redeem him. He remains vexed by memories of breaking his son Danny’s arm and of attacking George Hattfield, a former student who vandalized Jack’s car. Beneath these weighty regrets is another that Jack can hardly admit: his decision—motivated by pity or jealousy or both—to sabotage George, a golden boy with a bad stutter, by tampering with his time limit during a debate competition.

There’s Jack’s quest for redemption, and then there’s the fact that the Overlook is haunted and Danny is a terrifying, sweet-natured telepath. Danny’s abilities—or his “shining”—have an oracular quality. He often enters into a supernatural trance, emitting jumbled, familiar phrases in a Delphic word-salad. He is harassed in his dreams and his waking hours by the phrase “redrum”—rendered, in King’s emphatic prose, as REDRUM, a nonsense leitmotif and insistent omen of things to come.

If you’re a writer, the idea that writing is somehow ennobling might be a necessary delusion. But in Jack’s case, it’s also a costly one, and it unspools around him in an unbearable atmosphere of dread. Jack’s failure to reckon with his past, and his conviction that he can repair it through writing, only serves to resurrect its ghosts. In Danny’s first trance, he echoes the language of Jack’s hollow rationalizations for sabotaging George. It’s language that antagonizes Jack, and writing that allows him to antagonize others. When—either under the influence of the hotel or his own nasty hubris—Jack calls the hotel’s manager for no other reason than to harass him, it’s with threats of writing a book about the Overlook’s lurid history.

The hotel, with its violent past and resident ghosts, possesses Danny and eventually Jack, turning him into the homicidal monster immortalized by Jack Nicholson. But it’s Torrance’s devotion to writing, at once selfish and salvific, that drives him to bring his family to a haunted place. And it’s language—that inscrutable signifier redrum, the incriminating babble of his son Danny—that drives him out of his mind. If writing has the power to redeem, it’s ultimately exceeded by its power to ruin.

King famously hated Kubrick’s adaptation, which he characterized as “too cold” and compared to “a Cadillac with no engine in it.” It’s often said that King, who has described The Shining as autobiographical, was too invested in its material to evaluate its adaptation fairly. But “too cold,” when applied to Kubrick’s film, might be another way of saying too quiet. The film produces its unbearable tension by paring King’s “wildly undisciplined prose” into a precise mechanism of terror: long, pressurized stretches of silence erupt into Shelly Duvall’s unhinged, Munchian screams. The result is something of icy, iconic, almost abstract cruelty. Kubrick’s film revels in the psychic resonance of the image: an elevator flooded with blood, twin girls at the end of a hallway, a madman with an ax. But the characteristic feature of King’s novel is the way it dwells, with paranoid intensity, on the awful potency of its own language. The novel is as much about the wrathful potential of words and writing as it is about King’s struggles with fatherhood and addiction. And perhaps it was the extreme slightness of Kubrick’s script—the perfunctory quality of its dialogue—that gutted the novel’s wordy, exuberant heart. Watching The Shining might feel like having a nightmare, but reading it feels like living in one, which we might as well be this October.

Writing is a horrific process for virtually every writer except Stephen King, to whom its practical and financial agonies hardly apply. He has authored dozens of novels, virtually all of them bestsellers, and seems to write with tremendous ease and alacrity. “Writing is a wonderful thing to be able to do,” King told The Paris Review in 2006: “When it goes well, it’s fantastic, and when it doesn’t go so well, it’s only OK, but it’s still a great way to pass the time.” During the interview, King was “still frail” from a car accident that nearly killed him, but “was back to writing every day, and by night he would take his manuscript to Fenway Park so that he could edit between innings and during pitching changes.”

King’s relationship with writing seems eminently healthy. Why, then, does King’s fiction so often portray it as an avenue to madness, destruction, and death? One answer is that writing has been imagined as an agent of madness for centuries, since Poe and beyond. Another is that horror, especially for King, works by corrupting the commonplace, by locating a supernatural menace right under the surface of things. And few things are as common in our experience as language. If words are haunted, then so is virtually everything else.

Horror, once described as “genuinely subcultural,” has recently surfaced in the mainstream thanks to two national rites: Halloween and the forthcoming presidential election. (Stephen King on Twitter: “My newest horror story: Once upon a time there was a man named Donald Trump, and he ran for president. Some people wanted him to win.”) When Trump’s hot-mic audio from Access Hollywood leaked earlier this month, he followed his unfelt apology with predictable self-justifications. During the second Presidential Debate, Trump doubled down on the idea that his comments were only

“locker-room talk”—or that his private conversations about sexually assaulting women should not disqualify him from political office. The underlying principle at work is that even the most vile, incriminating language lacks political significance, and that all language, ultimately, lacks consequence.

This idea was just one of Trump’s many miserable contributions to the second Presidential Debate, which he spent calling for his opponent’s imprisonment and pacing behind her hatefully as she addressed the audience on the debate floor. Later, Alec Baldwin spoofed this behavior on Saturday Night Live to the famous theme from Jaws. And when I was scrolling through the debate coverage on my Twitter feed, I saw this tweet by the writer Katie McDonough, comparing Trump to the supernatural threat in David Robert Mitchell’s cult-horror hit from 2015.

These comparisons are funny and apt. And their very aptness made me want to turn the TV off and return to The Shining, which I was reading at the time. It feels

strange to discover that horror has become the reprieve from your political reality.

But, while that reprieve is telling of this dystopian moment in politics, it also reveals the underlying optimism (“I’m a fucking optimist!” King told The Paris Review) in the skewed, sinister imagination of Stephen King. In the world of The Shining, words are vested with the power to disturb, and language has unequivocal value, meaning, and consequence. Language has moral seriousness, you might say. The monster from It Follows may be the truest encapsulation that we have of Donald Trump: a disembodied venereal disease that pursues its victims with creepy, ambling complacence. We can only hope that the election and The Shining will share a roughly similar denouement: a madman undone by himself, damned by his own words. 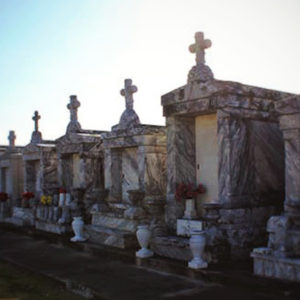 Awaiting the Devil’s Coming Charleston, SC, and Douglas County, KS The churchyard of the Unitarian Church in Charleston,...
© LitHub
Back to top
Loading Comments...