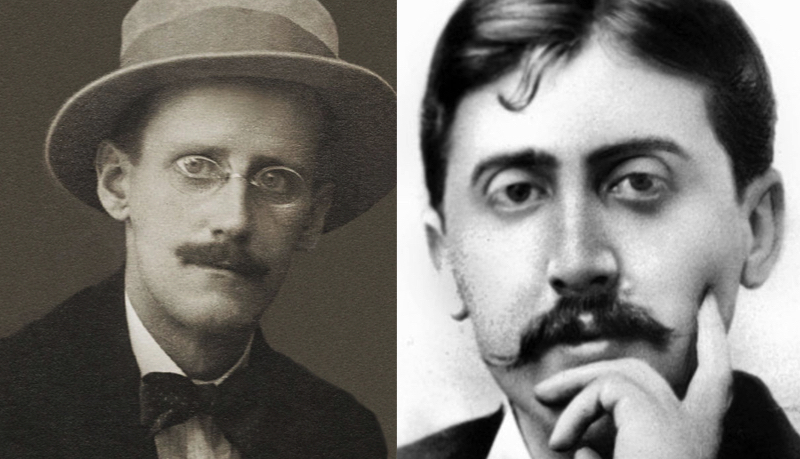 The temptation to start hanging out with real live people is strong. Despite being the epicenter of the worst global pandemic in a century even New York state is starting to reopen. I’m not going to get into the terrifying and moronic politics of the Covid Truthers, but it’s hard even for those of us who believe in science and civic responsibility to resist the call to congregate—the weather’s getting nice, every day feels like a Monedesday, and we could all use some human contact not through a computer screen. Hell, at this point I’d give a year of my life to go to one of those literary parties where you sort of know everybody but are convinced half of them hate you and the other half can’t remember your name and you need three drinks before you can relax… (But let’s all just stay inside a little longer, ok?)

With uncomfortable literary gatherings in mind, I was reminded that today marks the anniversary of a world-historically awkward hang starring two literary icons: Marcel Proust and James Joyce. So, to take our minds off this endless flow of days, let us now do a history.

It was just 98 years ago that wealthy British art patrons Sydney and Violet Schiff conspired to bring together, in their view, the four most important living artists: Pablo Picasso, Igor Stravinsky, Marcel Proust, and James Joyce.

As with any artsy soiree, accounts of the night vary wildly (look, even with photo evidence can you say for sure what exactly happened at the last after-after party?). According to Craig Brown’s book, Hello Goodbye Hello: A Circle of 101 Remarkable Meetings, Joyce arrived “shabby and drunk” and was ending his day just as Proust, who showed up at 2am, was beginning his. Whichever account you choose to believe (and there are many) the two did not hit it off. Here are but a few:

As told by James Joyce many years later to Jacques Mercanton: ‘Proust would talk only of duchesses, while I was more concerned with their chambermaids.’

As told by James Joyce to his close friend Frank Budgen: ‘Our talk consisted solely of the word “No”. Proust asked me if I knew the duc de so-and-so. I said, “No.” Our hostess asked Proust if he had read such and such a piece of Ulysses. Proust said, “No.” And so on. Of course the situation was impossible. Proust’s day was just beginning. Mine was at an end.’

As told by William Carlos Williams: joyce: I’ve had headaches every day. My eyes are terrible. proust: My poor stomach. What am I going to do? It’s killing me. In fact, I must leave at once. joyce: I’m in the same situation. If I can find someone to take me by the arm. Goodbye! proust: Charmé. Oh, my stomach.

As told by Ford Madox Ford: proust: As I say, Monsieur, in Du Côté de chez Swann, which without doubt you have – joyce: No, Monsieur. (pause) joyce: As Mr Bloom says in my Ulysses, which, Monsieur, you have doubtless read … proust: But, no, Monsieur. (pause) Proust apologises for his late arrival, ascribing it to malady, before going into the symptoms in some detail. joyce: Well, Monsieur, I have almost exactly the same symptoms. Only in my case, the analysis …

Yes, this is awful, and is a strong reminder of why literary parties can be so excruciating. Of course, we’re not all Joyces or Prousts or Genets or Steins or Rhys’ but as people who exist primarily in interior spaces (our own) we’re not always the most socially ept, and often cover up our awkwardness with arrogance and defensiveness; the only way out of these situations tends to be alcohol (which can make things worse!).

And in further evidence that long-dead literary icons are just like us, when Proust invited the Schiffs back to his apartment for champagne, a drearily drunk Joyce, forever the masochist, tried to tag along (don’t be that guy). Luckily for everyone involved, he was easily rebuffed by an adept Sydney Schiff, who was able “to bundle Joyce back into the taxi. Free of Joyce’s company at last, Proust and the Schiffs drink champagne and talk merrily until daybreak.”

Sigh. Wouldn’t it be nice to drink champagne and talk merrily until daybreak with your lovely, interesting friends? Yes, yes it would. Someday.