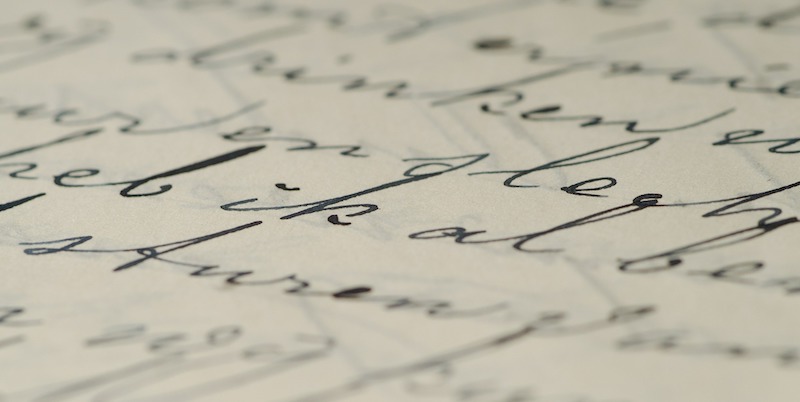 On the History of Powhatan Culture and Colonization: A Reading List

When my father retired from the Royal Navy in 1955, we moved from Wallsend in northeast England to his hometown of Cambridge. Many of my classmates at the Cambridgeshire High School for Boys—where my headmaster was Olivia Newton John’s father and members of Pink Floyd were my fellow students—grew up in villages surrounding the town. Here began my love of the fenland, which I traveled by bike and on foot, investigating its history, lore, and geography. A favorite place was Wicken Fen, a surviving undrained fenland habitat, standing six feet above the surrounding drained and shrunken fens’ rich, black farmland.

Later, at Queens’ College, I minored in Anglo Saxon, Old Norse, and Middle English to more deeply learn about my own language and history. There, I began to read about the importance of East Anglians to the early history of America—from Suffolk’s Bartholomew Gosnold to Lincolnshire’s John Smith, from Henry Spelman of Norfolk, a boy whom Smith found living among the Powhatan, to John Rolfe, also of Norfolk. Many Cambridge University graduates were among the settlers of Jamestown.

In 1964, I won a Proctor Fellowship to Princeton to do graduate work on American literature. Here, it became increasingly clear that in my courses on American literature and history, the voices of Indigenous peoples were missing. Thoreau alerted me to this, as did William Carlos Williams’ In the American Grain (“History! History! We fools, what do we know or care? History begins for us with murder and enslavement, not with discovery”). In 1972 I moved to Manhattan to teach and, feeling the need for “roots” in my adopted city and country, I set about discovering them with the aid of two books: Indian Paths in the Great Metropolis by Reginald Pelham Bolton (published by the Museum of the American Indian in 1922) and Robert Steven Grumet’s Native Place Names in New York City (Museum of the City of New York, 1981).

This reading, and further study, expanded into teaching an undergraduate course, “Native America.” I found excellent books to use but, discovering I needed reliable collections of Native American literatures, I set about producing them, starting with Coming to Light: Contemporary Translations of the Native Literatures of North America (1994), and continuing with Algonquian Spirit: Contemporary Translations of the Algonquian Literatures of North America which was published in 2005. After reading John Mason’s firsthand account of the Pequod War of 1637 and visiting the site, I began to think of writing an epic poem set in early New England, but kept coming across references to Virginia, about which I knew comparatively little.

Thus began my research for Huskanaw, which morphed from epic poem to historical novel and, in the process, brought me from histories of the fens (and Graham Swift’s Booker Prize-winning Waterland) to Elizabethan and Jacobean history and religion, pamphlets of the early 17th-century, books on firearms, shipping lists, accounts of early cross-Atlantic travel, and theory on the methodology of cultural translation. Above all, my research centered on the Virginia colony and Virginia’s Indigenous population, the Algonquian-speaking Powhatan. The books below were central to my understanding. 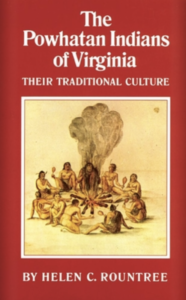 This wide-ranging study in clear, precise prose is full of detail and includes an excellent bibliography to take one even deeper and wider. It describes and discusses Powhatan hunting, agriculture and warfare, physical appearance and dress, construction of houses and villages, family and social structure, religion, medicine, gender, family life, and much else. Rowntree points out the limitations of her sources, while stating that her aim is to create a historical ethnography, “a description of the past based on historical documents.” In addition to describing Indigenous ways and mores, she illuminates the limitations of the English who lived in or visited Virginia and wrote about Indigenous people; she proceeds carefully to create a thickly textured, responsible reconstruction. 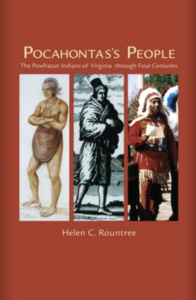 This book, a follow-up to The Powhatan Indians of Virginia, is a comprehensive history of the Algonquian-speaking Indigenous people of Virginia. She uses contemporary English writings while pointing out that the authors were men who wrote from within a colonial context and whose aim was to make a fortune, not to observe objectively. They say very little, if anything, about the lives of women, and, writing before the advent of the social sciences, their accounts lack full and objective descriptions. In the first four of ten chapters Rowntree covers similar ground to the previous book, but concisely. In the rest of the book she outlines the survival of a people up to the present day, discussing their social, economic, political and religious life. With a careful, balanced approach and multi-faceted grasp of the sweep of history, this is landmark scholarship. 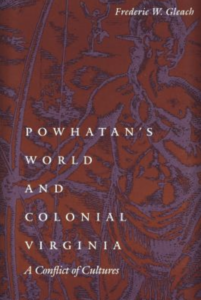 A lively and yet deeply researched study, this book is a complex and invigorating approach to cultural crosscurrents and conflicts. Drawing on the latest anthropological, ethnological, and historical studies, it is a story of two cultures, each with its own worldview attempting to establish a relationship  with the other to its own advantage. Gleach attempts to argue that motivations, as far as possible, must be understood in terms of their own cultures using a “controlled speculation.”  Where he speculates, he mostly convinces; mostly, he convinces and illuminates. 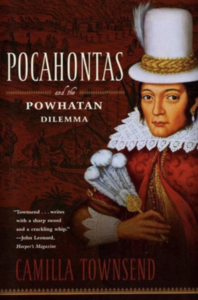 Townsend begins by taking us, novel-like, within the mind of the young Pocahontas (also known as Amonute and Metoaka) as she surveys her new world from the deck of a ship arriving in Plymouth. Townsend’s writing allows the story of Amonute to unfold organically, revealing her as an intelligent and resourceful woman. The result is a book full of surprising connections, comprised of deep scholarship in the service of investigating how historically Indigenous people saw, felt, and understood the world. The notes and bibliographic essay alone are a gold mine for researchers. 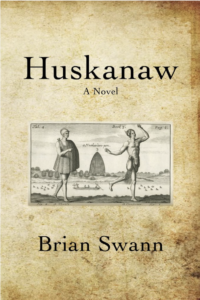 Huskanaw by Brian Swann is available via MadHat Press.

Kinari Webb on Her Quest to Heal the World 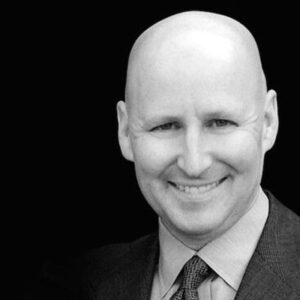 On today's episode of The Literary Life, Mitchell Kaplan talks to The Betsy hotel owner Jonathan Plutzik about its history...
© LitHub
Back to top
Loading Comments...