Britni de la Cretaz on the Research Behind Breaking the Story

I’d already been reporting the story of queer women in baseball during World War II for four months by the time I finally cracked open Lynn Ames’ book, The Bright Lights of Summer. I didn’t really think the historical fiction novel had anything to help my story. It was based on the life of Dot Wilkinson, a softball player from the same era I was reporting on. It was about a different sport and didn’t overlap with the league whose players I was researching at all. But there, in the very first chapter, a single sentence sparked an idea that would lead me to discover a treasure trove of previously unreported information.

A character in the book, Julie, is researching women who played softball in the 1940s after she discovers that her mother had been one of them. Julie knows that in the present day, a lot of women who play softball are gay. But in the 1940s, being gay was still unacceptable and dangerous—not to mention that homosexuality was still considered a mental disorder. Obviously there were no mentions of lesbians in old newspaper write-ups of the American Softball Association teams. But in her research, Julie finds a few present-day items that tell her she’s on the right track: obituaries, including that of Ricki Caito, Wilkinson’s longtime partner, who is mentioned in the obit as such.

I read that and I thought, what if the answers I’m looking for are in the obituaries? I’d been searching for months, coming up on dead ends and still-living All-American Girls Professional Baseball League players who refused to talk to me about the issue, even after I disclosed my own queerness in an attempt to connect. But it turned out the answers were in the obits, hiding in plain sight. The obituaries unlocked a story that had long been hidden—the story of the queer women who played hardball—and provided a glimpse into the lives these women lived when they stepped off the diamond.

The answers were in the obits, hiding in plain sight.

“I read obituaries every day to learn what sorts of lives are available to us,” writes Sarah Manguso in her book The Guardians: An Elegy for a Friend. Obituaries are an often overlooked source, tiny little tributes that are littered with clues about a person’s life. It’s where we learn who the most important people in someone’s life were, what they were like, what they liked to do.

Sometimes, obits can be something else, too: honest. “The obit as news, the obit as scoop, the obit that tells the stories that couldn’t be told while the subject was still in a litigious state,” Marilyn Johnson writes in her book about obituaries, The Dead Beat.

Obits are also historical documents, which, as researchers, we can interpret through our modern lens. For example, today we know that “loving companion” was often coded language to describe a same-sex partner. In one obituary I found, a player had a dreaded “special friend”; perhaps the only thing more insulting than being given the “special friend” title in your longtime partner’s obituary would be being left out completely. Jude Law’s character in the movie Closer, an obit writer, decoded some of this language: “‘He valued his privacy’—gay. ‘He enjoyed his privacy’—raging queen!”

And yet, despite being able to garner the clues about women who may have spent their lives with other women—who may or may not have identified as gay or a lesbian or queer—choosing to share these findings with the world at-large was another place for me to stop and consider. Yes, obituaries are public documents, so no, I wouldn’t necessarily be outing someone by sharing their name. But there is a good chance that these women were not out in their own lives. It’s possible that these women called their life partners simply a longtime roommate, a close friend, or a cousin. And while the stigma of queerness in 2019 is minimized in many ways from what it was when these women lived , it’s not gone completely; it’s just changed shape. We are still so close to their lifetimes. Their partners may still be alive. Some former players and teammates are still living. Is it disrespectful to write about a relationship that may have been a source of danger or shame or fear for someone?

On the other hand, isn’t it important to tell queer stories, to unearth them so that they are not lost? Isn’t it important for young queer people to see that we have always existed, that we have always been here, and if you know where to look, you can find yourself reflected even in an era that desperately tried to force us underground or completely erase us from existence? There are several books published over the last half a century that use a queer lens to look back at U.S. history in an attempt to center these oft-buried stories: Gay American History by Jonathan Ned Katz, A Queer History of the United States by Michael Bronski, Queer America by Vicki L. Eaklor. We’ve always been here and we’ve always been queer, and many of us have been hiding in plain sight.

For people who didn’t feel comfortable being publicly out during their lives, their obituary may have been a safe place to allow their full truth to live.

And for people who didn’t feel comfortable being publicly out during their lives, their obituary may have been a safe place to allow their full truth to live. Astronaut Sally Ride’s longtime female partner didn’t become known until Ride died, and her partner was listed in her obituary. When former member of the Texas House of Representatives, Barbara Jordan, died in 1996, her obituary named her longtime partner, Nancy Earl (the clues were public earlier than that, though; a 1988 story about Jordan being hospitalized after being rescued from the pool at her home mentions “Nancy Earl, who lives with Jordan.”).

This is true, too, the obituaries of AAGPBL players. As a queer writer and baseball fan, it is with gratitude that I read these obituaries. I am grateful for the women who came before me, who found love with someone even when the world told them their love was wrong. I am grateful to the family members and obit writers who recognized that love and honored those partnerships by including partners’ names in the obits.

It seems that these relationships resonated with a lot of other people, too. When my story was published in Narratively, it went viral and became the most-read piece on their website in 2018. It was covered by The Lily, the women’s vertical at The Washington Post, I was interviewed on sports writer Dave Zirin’s Edge of Sports podcast, and the story has been nominated for a prestigious baseball writing award. It made visible an entire community whose stories have gone untold despite the fact that their history on the baseball diamond has been well-documented, including in the classic movie A League of Their Own.

I know of several AAGPBL players who are still living, well into their 90s now. They’ve been with their female partners for decades, though none were willing to talk to me about it when I was reporting my story. “We didn’t talk about that,” was all they would say. It’s hard to open up about something you’ve had to keep secret as a matter of survival for the better part of a century. But now, living in a world that I believe is ready for their truth, I still hope to record their history while they are living, to hear the story of their lives and relationships straight from their lips.

I would never want to pressure someone into sharing something publicly that they don’t feel ready to reveal. I can only hope that maybe they read my piece—there’s a good chance they did; the AAGPBL’s Twitter account retweeted it and responded to it—and that they know they are seen and accepted for exactly who they are. I hope they know that their stories matter, to me and to a whole lot of other people. And maybe, just maybe, we’ll learn the full truth before it’s written in the obituary section.

Britni de la Cretaz is freelance writer whose work focuses on the intersection of sports and gender. Her writing has been featured in The New York Times, The Atlantic, Longreads, espnW, Bleacher Report, and more. Follow her on Twitter at @britnidlc. 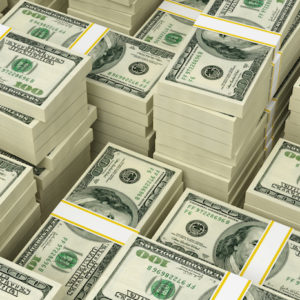 The 25 Authors Who've Made the Most Money in the Last Decade Keep your day job, they say. There's no money in publishing, they say. Books are dying, they say. And well, mostly they're...
© LitHub
Back to top