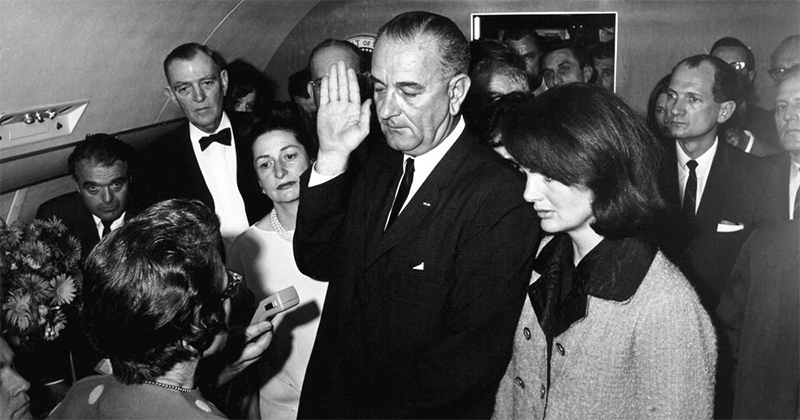 When History Changes in an Instant

“Why don’t you pack a bag and fly with me to Fort Worth tonight?” Lyndon Johnson suggested to his friend Jack Valenti. The date was November 21, 1963, and Valenti, who ran a successful advertising and public relations firm in Houston, could scarcely foretell the lasting effect that the invitation would have on his life.

The two men first met five years earlier at a luncheon that Johnson hosted for young, up‑and‑coming businessmen in Texas. Valenti subsequently volunteered as a floor aide at the 1960 Democratic National Convention in Los Angeles, where LBJ vied unsuccessfully for his party’s presidential nomination, and that fall directed the Kennedy‑Johnson ticket’s advertising in Texas. “I knew few people in the Johnson entourage,” he later admitted, “though I was a Johnson man and though I supported him vigorously and whole-heartedly and without reservation. I literally was on the darker edges of the last ring of the peripheral circle.”

Texas had long been a sturdy brick in the Democratic Party’s firewall. It remained critical to JFK’s reelection prospects, but its electorate was drifting steadily rightward. Hoping to repair a widening breach between the state organization’s liberal and conservative factions, Kennedy and Johnson scheduled a multiday political and fund‑raising swing that would carry them from Houston to Fort Worth, to Dallas and then Austin, and finally to the LBJ Ranch deep in the Texas Hill Country, where the first and second families would break bread together over a weekend replete with political and symbolic importance.

For Johnson, the stakes were high. He had never been especially close to the Kennedy clan, and in recent years his relationship with Attorney General Robert Kennedy—the president’s brother and closest political adviser—had grown sharply discordant. Quietly beleaguered by a series of slow-percolating scandals involving his personal finances, and seemingly powerless to forge a truce between liberal and conservative Democrats in his own backyard, LBJ was no longer a certain asset to the president, either nationally or in Texas. He had legitimate reason to fear persistent, low whispers that Kennedy intended to drop him from the ticket the following year.

Facing these trials, the vice president called on trusted friends from Texas to ensure a successful presidential visit. Valenti had been charged with organizing a critical leg of the journey—a dinner in honor of Representative Albert Thomas in Houston on November 21. Despite widespread concern that the city’s conservative citizens would shun the president, over 350,000 cheering local residents lined the city streets to greet JFK and his wife, who had arrived at 4:23 p.m. in “the lateness of a blue-skied day,” Valenti later recalled, on “the sleek, silver-bellied Boeing 707, Air Force One.” Riding in the official motorcade, he noticed that his seatmate, Kenneth O’Donnell, a principal White House aide, was “dour, unsmiling,” and “visibly nervous.” Only when he saw the crowds—“three, four, and five deep”—did O’Donnell relax. “They’re here, aren’t they?” he muttered with satisfaction. “They damn sure are,” Valenti replied. Privately, he was equally relieved, and even more so when over 3,000 local business and civic leaders packed the Sam Houston Coliseum for the evening’s dinner reception.

Short in stature but hard to miss in a crowd—“his dress was natty,” recalled one of his contemporaries, and he was “imaginative, quick‑thinking and fast-talking . . . a lively, friendly, sentimental human being”—Valenti was swept up in the moment. When LBJ pulled him backstage to meet the president, Kennedy warmly shook his hand and thanked him for producing so stellar a turnout.

He very much wanted to join the flight to the next stop, Fort Worth, and then on to Dallas and Austin the following day, but his wife, Mary Margaret— a former secretary in Johnson’s Senate and vice presidential offices—had given birth to their first child just three weeks earlier. “Is this trip necessary?” she muttered with disapproval, even as she obligingly packed an overnight valise for Jack, complete with two changes of clothing.

After the president and the vice president finished their remarks at the Houston dinner, Valenti boarded the vice president’s Boeing 707—a near, but not exact, replica of Air Force One—for the journey to Fort Worth. The next morning, November 22, he flew with LBJ’s entourage to Dallas, where Kennedy and Johnson were scheduled to address a luncheon at the city’s Trade Mart. At Love Field, around 12:00 p.m., Valenti stepped into a van with other vice presidential and White House aides, including Evelyn Lincoln, the president’s private secretary.

“The motorcade went through Dallas,” Valenti would remember, “and . . . we were all remarking about how marvelous the reception was. . . . It was about as big as it was in Houston. There were no hostile faces, not even a hostile sign, which was amazing.” At the head of the official column led an unmarked police car, flanked by uniformed officers on motorcycles. Next in line was the deep‑blue presidential limousine, which carried John and Jacqueline Kennedy and Governor John Connally and his wife, Nellie. They were followed in turn by a heavily fortified, open-topped limousine—reporters called it the “Queen Mary”—packed with eight Secret Service agents: four in the passenger seats and four others on running boards to either side, with O’Donnell and his fellow White House aide David Powers installed in the jump seats.

LBJ’s gray limousine—a rental—was next in line, trailing the Queen Mary at a distance of seventy-five feet. Behind LBJ traveled the vice presidential follow car, then a vehicle carrying three members of the press pool, a transport for other members of the news media, and vans and buses conveying news photographers, video men, and local elected officials. Valenti later estimated that his van was roughly twelfth in the motorcade. As the convoy turned onto Main Street, then right onto Houston Street and left onto Elm, he witnessed the impressive multitude of office workers who cheered from the windows of tall downtown buildings and saw the crowds—five and more deep—hoisting homemade signs in the bright afternoon sun and waving with admiration at the procession. “It was a beautiful day, beautiful weather,” noted a reporter who was present that afternoon.

Too far back in line to hear the piercing crack of a rifle shot, followed by two more in close succession, Valenti first sensed trouble shortly after 12:30 p.m. when “all of a sudden the motorcade began without reason to speed up, tripling the speed, maybe quadrupling it. We attempted to keep up. And we knew something was wrong because all of a sudden we got separated from the cars.” Uncertain what to do, his driver steered a direct course to the Trade Mart.

“Am I going to shoot this in color or black and white?” Cecil Stoughton wondered silently. Unlike Jack Valenti, Stoughton did hear the three rifle shots that rang out from the Texas School Book Depository. A captain in the U.S. Army Signal Corps who since 1961 had served as the official White House photographer, he would now capture the transfer of power from John Kennedy to Lyndon Johnson. Knowing that the wire services could not process Kodacolor or Ektachrome, Stoughton loaded the magazine of his new Hasselblad camera, and that of an older 35-millimeter job, with black-and-white Tri-X film and strapped both devices around his neck. Inside Air Force One, all the window shades were drawn shut by order of the Secret Service. The main cabin was dim and growing warmer by the minute, because the plane’s air‑conditioning unit only functioned when its engines operated in flight.

In addition to the original Kennedy staff contingent, on board were LBJ and his wife; three Texas congressmen whom Johnson had summoned to his side; Valenti, who was “not quite sure precisely why I was even here in the first place”; Bill Moyers, a former Johnson aide who, upon learning of JFK’s death, chartered a flight from Austin, where he was advancing the next leg of the trip, to make certain that he was among the president’s party; and a multitude of Secret Service agents, military advisers, valets, and secretaries. In later years, Kennedy and Johnson partisans would revisit any number of slights and rebuffs—both real and imagined—exchanged by both sides during that tense hour on the tarmac. Asked about his personal recollection of the occasion, Valenti admitted that he “never saw any of the so-called friction. . . . If it was there, I was not aware of it. Of course, you must understand that I didn’t know the names and faces of the players.”

Stoughton considered how to stage the scene. The Boeing airliner was narrowly constructed, leaving him little means to capture the principals—“the judge holding the Bible, and Mrs. Kennedy, and Mrs. Johnson, and the President, all things being equal”—in one frame. Fortunate to be carrying a wideangle lens, he leaned back against the wall of the compartment and “just sort of sprayed the room with my 35, so that I got pictures of everybody in there.”

Valenti can be seen pushed up against one of the plane’s windows in a half-crouched position, his eyes fixed in a bewildered stare. The memory of that flight back to Washington, and of the helicopter ride from Andrews Air Force Base to the White House, would forever remain etched in his mind.

Later that evening, Valenti found himself seated on the edge of a straight-backed chair in the president’s bedroom at the Elms as LBJ—clad in pajamas and perched upright in his bed—fired off a seemingly endless line of directives. Also seated around him were Moyers and Cliff Carter. Horace Busby had only just departed. Johnson’s aides were wearing the same suits they had climbed into that morning. The television set remained on, casting a dim glow across the room as it broadcast an endless loop of the day’s tragedy.

The new president was famously addicted to the telephone and had already placed scores of calls to congressional leaders, cabinet members, foreign heads of state, and corporate chieftains. Working out of his office in the Executive Office Building, he had been briefed by his economic and military advisers. Now, as Valenti recalled, “he was surrounded by men whom he trusted, and in whose persons he fully knew reposed love and respect and enduring loyalty to him.”

“You know, when I went into that office tonight and they came in and started briefing me on what I have to do,” he told his aides, “do you realize that every issue that is on my desk tonight was on my desk when I came to Congress in 1937?” Civil rights. Health insurance for the elderly and the poor. Federal aid to primary and secondary education. Support for higher education. Antipoverty and nutritional programs. It was there in LBJ’s bedroom at the Elms, 12 hours after Johnson assumed the awesome powers of the presidency, that the first cornerstone was laid for the Great Society. 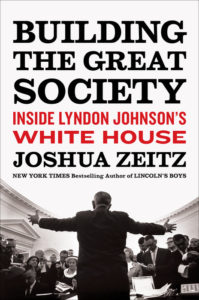 From Building the Great Society: Inside Lyndon Johnson’s White House. Used with permission of Viking. Copyright © 2018 by Joshua Zeitz.

Joshua Zeitz has taught American history and politics at Cambridge University, Harvard University, and Princeton University. He is the author of several books on American political and social history and has written for the New York Times, the Washington Post, New Republic, The Atlantic, Dissent, and American Heritage. He lives with his wife and two daughters in Hoboken, New Jersey.

Our Lady of the Prairie 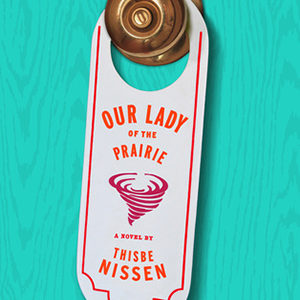 Our Lady of the Prairie

Our statistics are thrown off because we tend to remember the unusual rather than the usual. ​—​William R. Corliss,...
© LitHub
Back to top
Loading Comments...