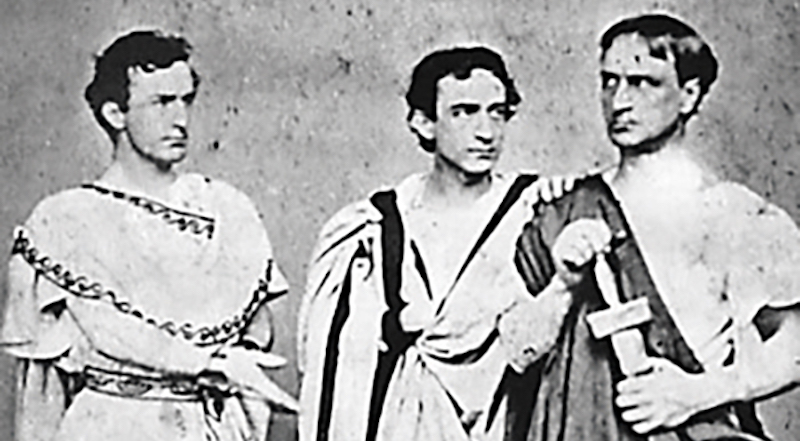 On that time John Wilkes Booth and his brothers starred in Julius Caesar.

Sic semper tyrannis—a quote attributed to Brutus, one of Julius Caesar’s assassins; the motto of the Commonwealth of Virginia; and the cry of John Wilkes Booth right after he shot Abraham Lincoln in Ford’s Theatre in 1865. Although one might imagine John Wilkes Booth was referring to the commonwealth’s motto, it’s clear that Julius Caesar was lodged in his psyche at the time of assassination—and a production of Julius Caesar he performed with his two brothers was a turning point in his life.

To get the picture, here’s a little context. John Wilkes Booth was the son of Junius Brutus Booth, a leading Shakespearean actor known for his turbulent work playing Shakespeare’s villains. The emotionally volatile Junius took his son Edwin out of school and brought him on tour, grooming him to be a star and teaching him Shakespeare while also making Edwin responsible for his alcoholic father. Meanwhile, John Wilkes and his other brother, Junius Jr., stayed at home.

Edwin Booth became a great stage success; but John Wilkes and Junius Jr. both wanted to be actors as well. But Edwin didn’t want his acting to be overshadowed by his family, so he told his brothers he would perform in New York, DC, Philadelphia, and Boston—the most lucrative places to act—while John Wilkes could perform in the South and Junius Jr. in the West. Junius Jr. struggled to make a living acting, and so did the volatile John Wilkes, who was never taught Shakespeare and seemed to get by on good looks and bluster: reviews of the time mock his comical mispronunciations, and he made up for his lack of training with spectacle, like screaming his monologues and improvising physical violence. John Wilkes was also reeling from bad oil investments, which some claim made him turn to heavy drinking and some claim made him turn to Confederate conspiracy.

Enter Julius Caesar. In 1864, Edwin, now owner of New York’s Winter Garden Theatre and a legitimate star, proposed the brothers reunite for a one-night production of Julius Caesar. Edwin would play Brutus, Junius would play Cassius, and John Wilkes would play Marc Antony. Junius enthusiastically agreed—he wanted the publicity. But John Wilkes was suspicious: “Is this some trick of Edwin’s?” he wondered to William Stuart, the Winter Garden’s manager. Stuart recalls John Wilkes’s unfamiliarity with the script; when he read it he was begrudgingly won over.

In a way, John Wilkes was right to think the show was a “trick of Edwin’s.” Promotional materials invited theatergoers to see “THE THREE SONS OF THE GREAT BOOTH”; the show sold out and the theater was packed. Yet instead of using the proceeds of the wildly successful show to help his financially troubled brothers, Edwin deemed the show a benefit production for a statue of Shakespeare in Central Park, which is still there. Neither John Wilkes or Junius were paid for their work on Julius Caesar, when payment would have changed their lives.

The show was paused in the middle due to a fire in a nearby hotel, but after a short break continued unhindered. It was revealed afterward that the fire was part of a Confederate plot to burn down the city; fires were started in 19 hotels, a theater, and P.T. Barnum’s museum, but mostly fizzled out. When the brothers learned about the arson attempts in the newspaper the next morning, John Wilkes vehemently agreed with the plot to attack New York City, and Edwin, who had opposing views, tossed John Wilkes out of his upscale apartment, saying John Wilkes was never welcome in Edwin’s home again.

Five months later, John Wilkes reenacted Julius Caesar in a very different style: by leaping onto the Ford’s Theatre stage in costume and assassinating Abraham Lincoln. A diary entry of Booth’s after the assassination, discovered in a small red notebook on his person when he was shot, reveals the play’s place in his psyche: “After being hunted like a dog last night . . . I am here in despair. And why? For doing what Brutus was honored for.”