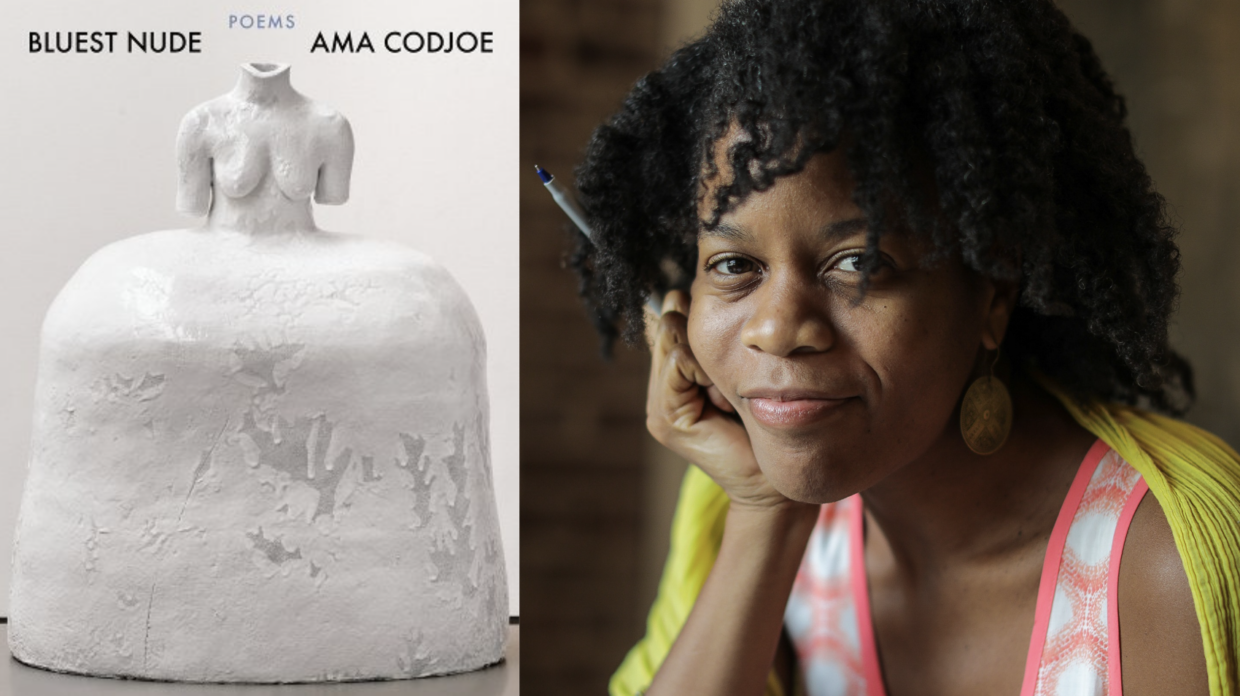 “My body is a lens / I can look through with my mind.”

“My body is a lens / I can look through with my mind,” writes the poet Ama Codjoe in the opening pages of Bluest Nude, her debut collection. It is impossible, of course, to perceive one’s own body from outside it, but Codjoe’s speakers find approximations and resemblances all around them: in mirrors, in photographs, in the lookalike bodies of a mother or a twin.

Often, a speaker identifies so thoroughly with the women she sees in paintings and performances that, by the poem’s end, the speaker herself has transposed into the subject of the art she exalts, the grammatical distinction between “she” and “I” dissolving altogether. Here, gazing at a portrait becomes an act of prismatic self-portraiture.

Codjoe’s project is not the imposition of the individual ego onto the world around it, but rather a kind of radical self-acceptance that might suspend the need to individuate in the first place. She convenes a long list of artistic and intellectual influences: Betty Shabazz and Deana Lawson; Gwendolyn Brooks and Mickalene Thomas; Lynette Yiadom-Boakye and Pina Bausch.

Yet though we know a great deal about their aesthetic tastes, we learn only snatches of biographical detail about Codjoe’s speakers: they are Black women; the doting daughters of doting mothers; selves for whom sexual agency, contact with art, and peaceable solitude are paramount values. Rather than self-revelation, these poems are primarily interested in the manifold ways people recognize, and narrate, their own lives to themselves.

Codjoe and I met six years ago as graduate students in the MFA program at NYU, where I was drawn immediately to her quick turns of phrase and the shimmering, iterative quality of her imagery. For as long as I have known it, her poetry has been at once tender and incisive, warm-toned yet punctuated by moments of razor-sharp diagnosis. We spoke over email in August about her masterful first book, life under racial capitalism, and the salutary power of aloneness, dance, and friendship between women.

Maggie Millner: This is a book obsessed with the desire to see oneself clearly, yet also to make language accommodate multiplicity and interdependency: the state of being both “me / and not only me.” What ethical, relational questions do you think underlie the speaker’s fixation on seeing and being seen?

Ama Codjoe: Your question encapsulates the essence of Bluest Nude; I am reminded of these lines from the eponymous poem: “I want to be seen clearly or not at all.” I think the fixation on seeing and being seen comes from the oft-cited conflict of being simultaneously hyper-visible and “invisible” (I hear Toni Morrison asking, “Invisible to whom?”). In some ways, this conflict exists outside of the text as a source.

In the context of racialized capitalism… solitude can feel anarchist.

In other ways, it runs through the collection as intermittently loud background noise. One of the efforts of Bluest Nude is to craft a book of poems where the speakers’ looking and self-looking, making and self-making, are determined by themselves: on their own terms and with their own vocabularies, reference points, and lineages. Consequently, one of the primary questions driving the text is: Who or what is the self? To these particular speakers, “the self,” even in solitude, is collective, inhabited by memories, histories, art, and desire.

MM: The speaker often gazes admiringly—even aspirationally—at images that might traditionally be thought of as “monstrous:” a woman with an iceberg growing out of her head; a depiction of Aunt Jemima with a “gushing head.” What solace or challenge do these images offer you as a writer?

AC: In these specific poems, inspired by works by Lorna Simpson and Betye Saar, I was thinking in part about how painful, utilitarian, damaging, and monstrous stereotypes of black women—Mammy, Jezebel, Sapphire—are to our collective consciousness, and how I could reimagine the mythology of these stereotypes by drawing new figures myself.

This effort of reinvention is central to my chapbook Blood of the Air (Northwestern University Press, 2020), where the poems you mention first appeared. In Bluest Nude, I am concerned with how I can take as a beginning something other than the destructive ways black women have been perceived by certain others, and, instead, form the speakers of the collection from their own dirt and with their own spit and blood. Sometimes I wonder if this kind of self-making is possible; at other times I act as if it is.

MM: The poems we’re discussing also operate dually as ekphrases (poems about visual art) and as ars poeticas (poems about poetry). How do you understand the connection between these two kinds of poetry?

AC: In some basic way, an ars poetica is an act of metaphor- or synecdoche-making; it’s a poem that likens something within itself to the process of writing. In a similar vein, the ekphrastic poems in Bluest Nude often compare a work of art to an aspect of the speaker’s world. I think ekphrasis and ars poetica meet well because they spring from the same comparative impulse.

MM: This book contains so many indelible images of Black women grooming or bathing alongside one another, including in the wonderful poem, “Lotioning My Mother’s Back,” in which a daughter becomes her mother’s caretaker. In what ways is your work reckoning with daughterhood and with inheriting matrilineal knowledge?

AC: One of the enduring questions in my writing and in my life is about what I have inherited, emotionally and psychologically, from my parents, grandparents, and ancestors. My body, too, is an inheritance. I want to consciously decide what I will make of my inheritance. What I will do with its abundance and lack, migrations and oceans, sutures and scars. This kind of reckoning is one way to think about a daughter’s duty.

MM: Likewise, a poem will often show a group of women conjoining into a single individual, or one woman suddenly multiplying into many. How do you think about solidarity among women, and how do you see your poems as evocations of that dream?

AC: Well, first I’ll say that in the time I’ve spent on this planet, women have been the truest, most beautiful givers of love in my life; my identities as daughter to my mother and sister-friend to my friends have been the most consistently caring relationships I’ve known. Secondly, I’m a romantic in the sense that I believe love is the only important something, and I want the poems of Bluest Nude to express all kinds of love, including kinship, friendship, sisterhood, and self-love.

When, in the last stanza of the title poem, I write: “It’s love the women and I make. Love fashions / our sight,” I am acknowledging the power of love to behold with what Imani Perry calls “gentle eyes.” This companionship, beholding, and being with is a fact of my life and so, I suppose, the poems are expressing a dream of solidarity already made real.

MM: I know from our talks that you received a master’s degree in dance before you pursued a degree in writing. Does your experience as a dancer inform your poetics?

AC: I am in my body in a way that feels particular to my study of dance and I think the knowledge and awareness I’ve earned as a dancer impact my lived experience—how I exist in a room or situation—and, therefore, my poetics. Put simply, perhaps it’s a matter of what I am inclined to pay attention to.

MM: The specter of sexual and physical assault also haunts these pages without ever surfacing as a narrative event; the poem “She Said,” for example, dramatizes these narrative caesurae as literal “holes” and torn pages in an official court transcript. In what ways does poetry, for you, both succeed and fail to bear witness to bodily violence?

AC: The gaps, silences, and omissions in “She Said” enact language’s inability to describe, to tell the story, to say. Striving to “say anyway,” to somehow use the device of language, is one way I define poetry. In other words, poetry’s failure to bear witness to bodily violence is precisely its value—the failure is an expression of an experience of physical and sexual assault that defies the logic of narrative, linearity, and language; the success is the attempt: crafted, worked over, stitched together. Also, there is something in the not saying, a kind of refusal, that feels authentic, powerful, and useful.

MM: I want to end on the concept of solitude. Though this is a richly peopled book—brimming especially with women artists, male lovers, and Black elders—the speaker often asserts her desire to be alone: “I love how softly / he touches me, though all I want / is to be left.” What nourishment do the speakers of your poems so often find in aloneness?

AC: The solitude some of the speakers of Bluest Nude cherish is an aloneness that does not have the luxury of being ahistorical or overly self-reliant. And yes, it is a solitude finished with caretaking and service. In the poem you mention, I aim to upend the form of the aubade to be not about lovers separating at dawn, but instead about a speaker who yearns to be left alone with the remnants of her dreams.

Maggie Millner is the author of Couplets (FSG 2023). Her poems have appeared in The New Yorker, The Paris Review, Poetry, and elsewhere. She is currently a senior editor at The Yale Review and a lecturer in writing at Yale. 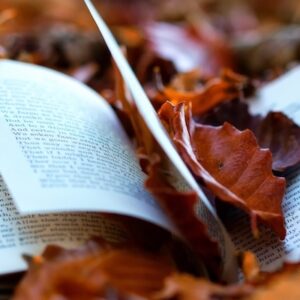 Celeste Ng’s Our Missing Hearts, Annie Ernaux’s Getting Lost, Elizabeth McCracken’s The Hero of This Book, and Orhan...
© LitHub
Back to top