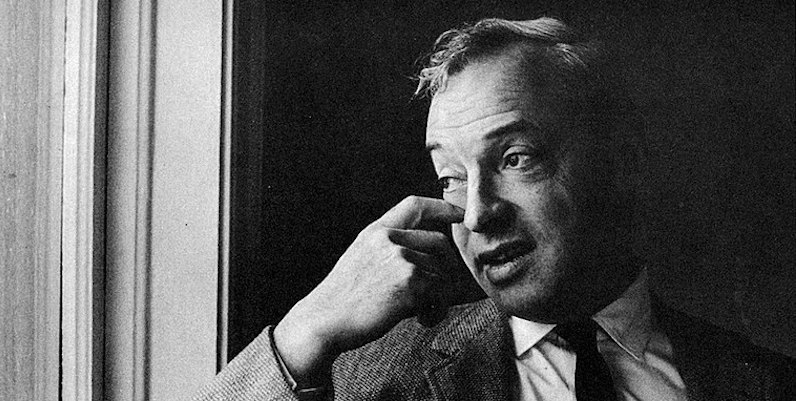 On Saul Bellow’s Celebration of the Messy and Manic

Brian Castleberry Rereads the Man Who Taught Him to Write

After flunking out of college in the 90s, I spent years taking whatever jobs would pay rent, or when I was sleeping on a borrowed couch, pay for a little food and something to pitch in toward an electric bill. For a short time I ran a blender at a college town juice place, dumping shots of wheatgrass into whirred frozen fruits and protein powder. It was during these otherwise empty months that a friend scored me a guest university library card. In the evenings, only recently off drugs and sort of waking from a fog, I stalked the gray aluminum fiction shelves, reading on the cold and dusty floor, leaving with a book and returning for another the next day. At some point in my extended youth I’d decided I would be a writer, though I knew nothing about what that would mean.

I was trying to self-educate, I guess. I’d grab up books with titles that sounded edgy: Of Human Bondage, The Immoralist, Death in Venice. I read Kafka like he was going out of style, and started to imagine myself—only a few years from the dirt road in rural Oklahoma where I’d grown up—as a sort of continental intellectual. Once, I checked out a book on the French new novel thinking I was going to learn a thing or two about my so-called craft, only to learn that characters were old hat, or maybe had been in the 60s, I can’t be sure. I’d thought when I picked up a book called The Absurd Hero in American Fiction that I would learn something about how to be funny as a writer. Instead, the book introduced me to the dark vast nothingness of existentialism and the wild inner everything of Saul Bellow.

Bellow’s first two books are slim ones, written in the 40s, certainly “absurd” in their depiction of central characters beset by forces they can’t understand. The Dangling Man is about a young man waiting to be drafted into World War Two; The Victim follows a character harassed by a guy he’d wronged with only a slip of the tongue, years ago. Both begin to build toward what I feel are the essential qualities of Bellow’s work: a close and inventive attention to language, the wild noise of an individual’s rambling inner life, and a cast of gargantuan characters ready to make spectacles of themselves on the page. Reading from his third book, the massive Adventures of Augie March, you see an author in the full stride of his style, embracing the fast-talking Chicago of his youth and the shape and sound of Yiddish storytelling. Note the way the narration here sounds like the individual voice of a particular speaker:

Now I know it wasn’t so necessary to lie, but then everyone thought so, and Grandma Lausch especially, who was one of those Machiavellis of small street and neighborhood that my young years were full of.

The cops kept us to one side, for there was another matter being heard, and four or five faces of peculiar night-wildness by the electric globe of the desk, and the sergeant with his large flesh and white fatty face presiding.

These are sentences that bend to the will of the character, and in doing so reveal not only personality, but a way of seeing the world around us anew. There’s something manic to Augie, but really running throughout Bellow’s work. He wants us to celebrate and embrace life, the moment we’re in, the voice in our heads we don’t always show to the world—our own peculiar night-wildness. For me, this willingness to find the inner chaos of a character and let that chaos take hold of a story was foundational. It seemed, and still seems, like a moral necessity.

His work helps us to see across to others and understand some of the storm and music of their personal life.

Growing up in conservative Oklahoma, where small talk puts a wall between everyone’s true selves and a boxful of various bigotries limit nearly everyone’s potential, Bellow’s explosive brand of characterization hit me with a shock. Here were characters whose minds were as wild and noisy as my own. Here were plots about the mind, rather than the external actions I’d previously thought were the only drivers of a story.

It’s telling enough that one of his most famous short novels is titled Seize the Day, but instructive that this book really only features a couple of plot events. The main character has breakfast with his father and later goes to a commodity trading floor with a guy who may or may not be fleecing him. Everything else is our character’s mental wanderings, and these are anything but dull. These characters are individuals—not in the John Wayne/Ayn Rand category of prepackaged “individualism,” but the messy, faulty, delusional, genius sort of individuality we all know from our own lived experience. His work helps us to see across to others and understand some of the storm and music of their personal life.

Another approach to the craft I learned from Bellow’s example is how to shape the inner arc of a character through theme and variation—or alternately, development and amplification. If a narrative promises a close view inside a character’s mind (in 1st or 3rd POV), a kind of tension can be built by letting that character drop part of a memory or observation early and then return to it, widening the view with each successive return. In my still-not-fully-educated mind, this works like theme and variation in music, creating a pattern that shifts and explores the potentials of something we heard before.

A good example of this comes in Humboldt’s Gift, when the narrator, Charlie Citrine, mentions in the early pages of his story a man who is angry with him about a stopped check. We drift from this stopped check and return pages later to learn of a card game that warranted the check in question, then return again to discover the guy who received the check is a criminal, and still only later do we see the full memory of that night, which is changed again when he is confronted with the criminal’s side of the events. In the meantime, fifty pages have passed, and over the course of that time we’ve learned much more about Citrine, his troubles, his city, his past and future. And not a sentence feels wasted—it’s all loaded with energetic, hyper-observant prose, and feels on the page like the natural narrowing and obsessing of the wandering mind.

In another novel, Herzog, we watch as a character is revealed layer by layer through this process of returning to the key themes/obsessions of his life. A middle-aged man losing his grip of reality (and writing endless letters he’ll never send to friends and celebrities), Moses Herzog is one of the most compelling characters in American fiction, and despite this, the book never settles for just being a character study. There is movement and action in the revealing of his multiple failures and dreams.

Bellow has his drawbacks, as most writers from the last century do. While he was close and lifelong friends with Ralph Ellison, he was critical of multiculturalism and the value of global literature. I’ve never known what to make of Henderson the Rain King, a novel about a middle-class American running off to Africa and traveling among people no more real than the racist tropes of old Bugs Bunny cartoons. His books are overloaded with men, and men are always at the center of things. While this offers up some interesting analysis of the erotics of homosocial bonds (especially in Humboldt’s Gift), and Bellow hardly glorifies misogyny, overall a reader is left with a thin version of the world when women are so often placed to the side of a narrative’s main action. I can’t help but wonder how much richer his already rich style would have been if some of his midcentury inadequacies had been challenged and overcome.

Even with a more critical view of his work, I return to him as a foundational figure in my life. For better or for worse, he taught me how to write, or at least showed me an ideal of how to write. And he led me to a raft of Jewish writers like Roth and Lispector and Babel who have shaped my writing and reading life ever since. Over the last several months, as 2020 veered from hope to tragedy and back again, I buoyed myself with Bellow’s loud characters, strutting around Chicago, rambling out their endless plans and opinions and complaints. His work was on my mind at a protest in Richmond a couple of weeks ago, when a preacher called on us to look the nearest stranger in the eye and say, “your life matters to me.” I remember thinking then, and as we started to all move into the street: this is what we do, this is the work. 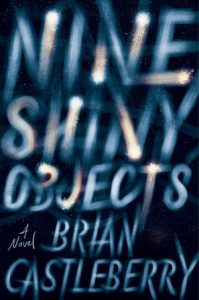 Brian Castleberry's debut novel, Nine Shiny Objects, was a NYT Editor's Choice and an Indie Next selection and was long-listed for the PEN/Faulkner Award. His shorter work has been published in Narrative, Day One, The Southern Review, and elsewhere. An Oklahoma native, he lives in Virginia, where he is director of the creative writing program at the College of William & Mary.

What We Remember When We Feast Beside a Plundered Sea 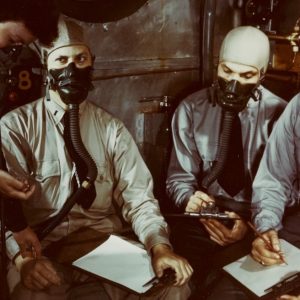 Mile 87, US Highway 98 HACKLES UP IN FORTRESS FLORIDA We’re currently stalled in a neck of the woods known as Fortress...
© LitHub
Back to top
Loading Comments...