On Receiving an Anonymous SOS Letter From China About Religious Persecution

“Mommy, what’s this?” Katie asked, picking up the paper and unfolding it.

It was a note, handwritten in blue ink. The writing was neat. But the letter was filled with crossed-out words and broken English. The author had added a few Asian characters in parentheses. It looked like an early draft of something.

Julie froze as she read the message.

If you occassionally buy this product, please kindly resend this letter to the World Human Right Organization. Thousands people here who are under the persicuton of the Chinese Communist Party Government will thank and remember you forever.

She was bewildered. Is this a prank? she thought. She kept reading.

Sentence (unlaw punishment) (非法勞教). Many of them are Falun gong practitioner, who are totally innocent people only because they have different believe to CCPG (中共政府), they often suffer more punishment than others.

A mixture of terror and disbelief shot up Julie’s spine as she understood the gravity of what she was holding: It was an SOS letter from the person who made her decorative gravestones. The letter had slipped past armed guards at a Chinese gulag, eluded managers at all stages of the supply chain, and traveled more than five thousand miles across the Pacific Ocean before landing on Julie’s forest-green rug.

Little did Julie know, the letter that had landed in her home was one of many SOS messages written by various prisoners across China.

She stood there, stunned. She had heard of Chinese sweatshops, but she did not realize that forced-labor camps still existed. She rushed to her laptop to Google “Masanjia,” clicking on the first link, a Wikipedia entry.

She read that Masanjia labor camp was established in 1956 and expanded in 1999 to make room for the followers of a newly banned spiritual movement called Falun Gong. She did another Google search, this time clicking on images. Disfigured bodies with purple, swollen faces appeared on her screen.

What could she, a nonprofit administrative assistant, do about this? She felt sick as she tried to formulate a plan.

Who do I even call?

Time seemed to slow down. Katie’s muted singsong voice hummed in the background as Julie posted about her discovery on Facebook, attaching a picture of the letter.

“I found this in a box of Halloween decorations that I just opened,” she wrote. “Someone in a Chinese labor camp asking for help. I am going to do as they asked, I will turn this over to a Human Rights Organization . . .”

She wanted to stop everything to read more about modern labor camps. But this was the only time she had to prepare for the birthday party next weekend. She returned to sorting decorations in a daze.

It’s been two years since this package was purchased.
When was this undated letter written?
Two years ago? Five years ago? Ten years ago?

Little did Julie know, the letter that had landed in her home was one of many SOS messages written by various prisoners across China, which would emerge from stores like Kmart, Walmart, and even Saks Fifth Avenue. Consumers found notes inside a set of cupcake boxes, tucked in the zipper compartment of a purse, and hidden inside a paper shopping bag made in China. News outlets such as the New York Times, the New Yorker, and the BBC would report on at least seven different Chinese SOS letters found in products between 2012 and 2019.

What could Julie, an ordinary American, do for a nameless Chinese prisoner?

The first well-documented case had occurred in 1994, when a Chinese American human rights activist named Harry Wu got hold of a letter from a man trapped at a forced-labor quarry in the province of Guangdong. The man was Chen Pokong, a prominent pro-democracy organizer, and he had signed the letter with his real name. A flurry of international condemnation—including a US congressional hearing—ensued. The exposure eventually helped Chen leave the labor camp and immigrate to the United States.

But what could Julie, an ordinary American, do for a nameless Chinese prisoner?

As she cooked dinner for her family that night, she felt entirely alone. Then she heard the pull and thud of the door. The clunk of a dropped bag. The screech of chair legs. Chris was home from a hunting trip.

“You’re never going to believe what I found in this box,” Julie said, pointing toward the packaging that still littered the floor. “It’s been sitting in our shed for years!”

Chris read the letter but remained quiet for some time.

“Well, I think it’s real,” she said. “I’m going to take it to work to have my coworker translate the Chinese parts to see if it says anything else. He’s from China.”

“Okay,” he said gently. “You do that.” Although Chris was worried that Julie was falling for a hoax, he did not want to start an argument.

The conversation shifted to concerns about the family data plan. But the words in the letter kept running in the back of Julie’s mind: People who work here have to work fifteen hours a day . . . Otherwise, they will suffer torture . . . 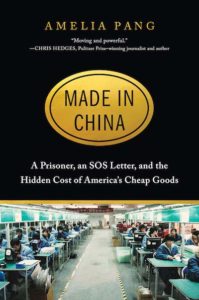 Adapted from Made in China by Amelia Pang ©2021 by Amelia Pang. Reprinted by permission of Algonquin Books of Chapel Hill. All rights reserved.

Amelia is an award-winning, investigative journalist of Uyghur descent. Her work has been published in The New Republic, Mother Jones, and The New York Times Sunday Review, among other publications. She is currently an editor at EdTech Magazine. 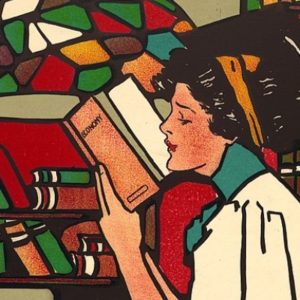 My sister always goes to the same bookshop in Oxfordshire, where she lives. There she seeks out a young bookseller with a shock...
© LitHub
Back to top
Loading Comments...