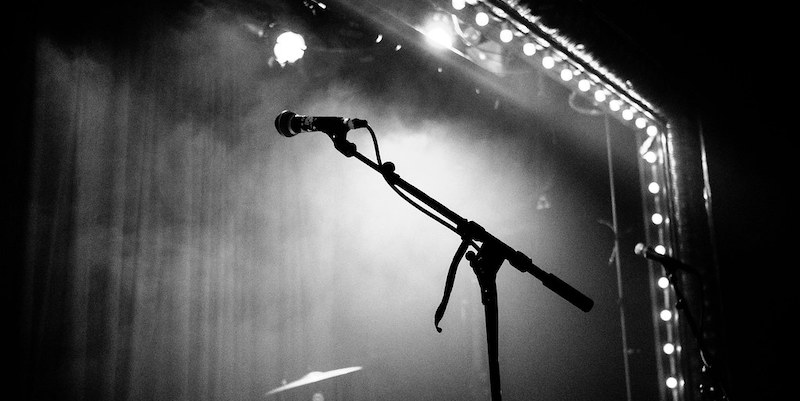 On Rap’s Linguistic Twists and Turns

Daniel Levin Becker on the Challenges of the Art Form

Are there unrappable words? Not words that can’t be gerrymandered into rhyme by tricks of truncation or pronunciation, but words so ungainly, so unwieldy, so unhip, so unhip-hop, as to definitively resist rap’s tractor-beam powers of assimilation. Do such words exist? No! says the wide-eyed idealist in me. I mean, probably, says the grizzled skeptic, who doubts I’ll hear pulchritude or amortize or hoarfrost or chilblains dropped over a beat before I die.

But then there was a time not so long ago when I would have put lugubrious on that list, and now here we are. Lil Ugly Mane, a producer from Virginia with a gothically bug-eyed rapping style and at least a dozen different stage names, rhymes it with a run of propositions like flyer than a stewardess and been sick since the uterus, so I’m certainly not complaining.

“Before this point,” writes Jelani Cobb, in To the Break of Dawn, of the seven-minute B-side version of LL Cool J’s “Rock the Bells”—the version that has bells in it—“it would have been highly unlikely that a rapper would use the words connoisseur, tympanic, impresario, pestilence, plateau, subpoena, conjecture, cranium, plagiarism, metabolism, auditory, eradicate, adversary, membrane, jugular, manuscript, and virtuoso in a single song.”

Today, as we all know, it’s practically mandatory for a rapper to use all of these words within a single song. (Kidding! That would be an intolerable world.) Today that density of five-dollar words remains as rare as it was in 1985, but surely no more so than finding those seventeen words in twenty pages of a novel or an episode of, I don’t know, a medical malpractice drama about a vindictive librettist. LL was showing off for sport, stunting on the dictionary and just being obnoxious in that singularly charming way he used to have of being obnoxious. Nobody needed the Macbeth reference (Ambassador, the Thane of Cawdor / Dialect so def it’ll rip up the floor). Nobody needed to hear him say I initiate gyrating.

Still, Cobb has a point. This was one of those gestures that historically carved out a little more space in hip-hop for wordiness for wordiness’s sake, from the experimental verbosities of Bahamadia or Busdriver or Milo to the Bulfinch-toting Ritalin oratory of Aesop Rock, who led the pack by miles in a 2014 token analysis of rapper vocabulary sizes; from the Sondheimian toniness of Lin-Manuel Miranda’s Hamilton to this one tongue-in-retainer microgenre called nerdcore, where dudes put on exaggerated nasal voices to rhyme about Pentium chips and graphing calculators (MC Frontalot: The lecture I give with it when I rap a rhyme / To such a top condition (graphed improvement over time) / Would indicate my origin at age negative nine). LL wasn’t the begetter of any of these things, but he’s irrefutable evidence of precedent.

The point of rap, among others, is the pleasure of finding words that aren’t just transparently informative but challenging to use.

I’m not talking about wordiness for wordiness’s sake, though. I’m talking about styles of rap where five-dollar words seem intuitively as out of place as four-part harmonies or terza rima. I’m talking about the clash of registers I can’t help but perceive when I hear a word like lugubrious in a crusty rhyme about shooting someone in the face; I’m talking about how the nine members of the Wu-Tang Clan claimed six of the top twenty-five spots in that token vocabulary analysis but my ears and eyebrows still perk up to hear RZA talk about fallopian tubes or Inspectah Deck about computer software.

Is that odd? Should I be surprised? Does Kevin Gates have any less of a right to say hindquarters, or Lil’ Kim to say buffoonery, or Mannie Fresh to say microwave oven or Cam’ron to say Fancy Feast, or Nicki Minaj to say tax bracket or Ras Kass to say fuck tithing, or Guru to say slacks or Andre 3000 to say exfoliating, than—well, me?

There’s an appealingly simple sociolinguistic view, one my grizzled inner skeptic appears to have embraced, whereby words function as vectors of status: where vocabulary and diction map faithfully to acculturation and lifestyle, where every social stratum has its vernacular and every vernacular its social stratum. (Jay-Z: So I’m cruising in the car with this bougie broad / She said, “Jigga man, you rich, take the durag off”).

If rappers, at least of the styles at issue here, dwell more on sex and criminality and intoxication than they do on education or science or dental hygiene, wouldn’t they be better off sticking to a slang calibrated to those things, rather than to the distinct jargons of people who spend a lot of time talking about informatics or critical theory or electron microscopy? If we know Cam’ron to be a guy who raps with tireless inventiveness about selling crack, isn’t it naturally going to be hard to picture him feeding a housecat?

Well, no and no. The trouble with this sociolinguistic view is that it’s not just simple but simplistic: for one thing, it fails to account for the omnidirectional inter-register slippage already underway at a time where you’re as likely to hear Gucci Mane quoted by an MSNBC anchor or a tech VC as you are to hear Raekwon rhyme about escrow. For another, and more perniciously, it holds words themselves, and their corresponding concepts, as a kind of property delimited by milieu, which is to say by class. I might wonder innocently, naively, whether it’s appropriate for Nef the Pharaoh to say infrastructure or Lady of Rage botulinum toxin, but that puts me only a few steps away from arguing that there are some places where rap and rappers don’t belong.

Which is wrong, intuitively and philosophically. Say what you will about its morals and manners, rap long ago became the music of the overclass as much as the underclass, and its reliable preoccupation with having nice things—boastfully or covetously—is a supremely organic and democratic way for signifiers to flow across artificial barriers of diction. That’s the best way I can find to read the Queens MCs Action Bronson and Meyhem Lauren, whose pious devotion to imported meats and expensive pens breezes through wealth-signaling, nods at showy precision, and comes to rest in a thrilling kind of mundanity. Don’t try to put me in a box like a tissue / ’Cause I’ll put you in a box with a pink suit / Then fuck around and have some squid ink soup, bitch, Bronson shouts in a song called “Falconry.” He has an album called Rare Chandeliers; Lauren has one called Mandatory Brunch Meetings, plus song titles like “Fingerless Driving Gloves” and “Pan Seared Tilapia” and “Beautiful Areolas.” I could go on. By cutting the bombastic opulence of Rick Ross with the highbrow materialism of Frasier Crane, and still leaving room for weird sex boasts and nods to vintage basketball players, they’re not so much testing the boundaries of word rappability as flouting them altogether.

And who’s to say that’s not the future LL wanted? That no register has a monopoly on lived or imagined experience is the whole point of the language arts. The point of rap, among others, is the pleasure of finding words that aren’t just transparently informative but challenging to use, surprising to hear, satisfying to say. (Seriously, say lugubrious out loud.)

To draw on words of diverse origin in unpredictable succession, to code-switch within the same thought between the sumptuous pomposity of lugubrious and the blunt animism of I’ma let the Uzi spit, is not to be inconsistent, much less to trespass, but to preserve the same resourcefulness that’s been core to hip-hop since DJ Kool Herc jacked electricity from the lampposts in Cedar Park to power his open-air dance parties. Unlike most of the things they describe—unlike electricity—words can’t be bought or sold, which means they can’t be stolen, which means they can only appear to be vectors of milieu and money and class and all the bullshit those things are supposed to distinguish. What words really are is a renewable resource whose possession and usage will not be regulated. 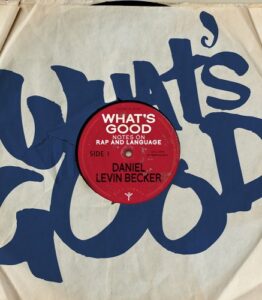 “On Register” from What’s Good: Notes on Rap and Language. Copyright © 2022 by Daniel Levin Becker. Reprinted with the permission of City Lights Books.

Daniel Levin Becker is a critic, editor, and translator from Chicago. An early contributing editor to the groundbreaking lyrics annotation site Rap Genius, he has written about music for The Believer, NPR, SF Weekly, and Dusted Magazine, among others. His first book, Many Subtle Channels: In Praise of Potential Literature (Harvard UP, 2012), recounts his induction into the French literary collective Oulipo, of which he became the youngest member in 2009. His published translations include Georges Perec's La Boutique Obscure (Melville House, 2013), Eduardo Berti's An Ideal Presence (Fern Books, 2021), and Serge Haroche's The Science of Light (Odile Jacob, 2021). He is also co-translator and co-editor of All That Is Evident Is Suspect: Readings from the Oulipo 1963-2018 (McSweeney's, 2018) and the editor of Dear McSweeney's: Two Decades of Letters to the Editor from Writers, Readers, and the Occasional Bewildered Consumer (McSweeney's, 2021). Levin Becker is a founding editor of Fern Books, English editor for the French nonfiction publisher Odile Jacob, senior editor at McSweeney's Publishing, and a longtime contributing editor to The Believer. He lives in Paris.

Writing a Memoir Taught Me How to See My Mother 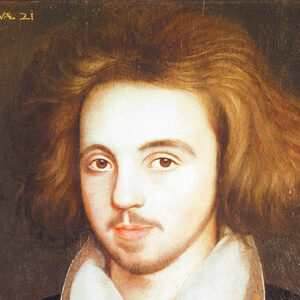