On Our Relentless Quest for Bigfoot

What Does the Elusiveness of the Sasquatch Reveal About Human Nature?

The rocks started to fall as the last tinges of sunset disappeared from the horizon. Or what sounded like rocks. We didn’t see the several objects that landed in succession with a clean but heavy ker-plunk into the small lake right beside us.

My partner and I were sitting alone beside the embers of a campfire in Cape Scott Provincial Park, a remote backcountry wilderness area on the northwest tip of Vancouver Island, in British Columbia. A group of us had spent the evening by the lake enjoying the views of the undulating mountains that surrounded us. The others—a close friend and four Irish backpackers we’d just met—had returned to their tents beneath the old-growth canopy, a short walk away, at dusk. There were no other souls around. We’d heard no one approach by either land or water. In fact the area had been dead silent from the moment we arrived. Yet what sounded like projectiles were landing feet from us into the water.

We intuited danger and became panicked. On cue we feverishly fumbled for our headlights and cooking utensils and dashed back down the boardwalk to the campsite—where everyone had already turned in. During that mostly sleepless night we endured strange sounds around us including a loud and violent crashing noise that echoed from the direction of the lake.

As we got back onto the hiking trail at dawn, myself exhausted and bereft of desire to revisit the scene of the presumed bombardment, the irony of what had happened came upon me at full force. Just weeks before, I had completed the final edits on a nonfiction book in which I investigated similar mysterious incidents in the nearby Great Bear Rainforest on BC’s central and north coast.

The indigenous residents of what is the largest intact temperate rainforest in the world have long reported run-ins with a species of hybrid man-apes known commonly as “Sasquatch” or “Bigfoot.” As in other parts of North America where these elusive, cryptozoological primates—unrecognized by science—are said to lurk, reports of the creatures in the Great Bear are rife. They range from eyewitness encounters, to sightings of large humanoid tracks, to mysterious vocalizations, to incidents of rock throwing—such as that which seemingly happened at the lake.

That bizarre episode with its strange and auspicious timing further complicated one of the most fascinating yet puzzling topics I’ve ever pursued as a journalist.

The question of Bigfoot’s existence, for which no evidence conclusive to mainstream science has yet been produced, is seen by some as one of the fundamental mysteries of nature. Opinions about what Sasquatch is vary. Like Rumi’s story of the blind men groping at an elephant, Bigfoot enthusiasts define the creature in terms most familiar to them. To some it is a rare and elusive flesh-and-blood creature. To others it is a supernatural being. For the sci-fi minded, Bigfoots have extraterrestrial origins. Meanwhile, skeptics and debunkers see only hoaxing and self-delusion surrounding the creature.

Bigfoot’s deepest significance is what it tells us about ourselves.

My own journey to the Great Bear Rainforest was driven by a deep desire to better understand the phenomenon. As a kid I grew up reading Sasquatch books and later met people in adulthood who claimed to have seen the animals—many of whom had no interest in, or knowledge about, the subject.

My inclination at the outset was to approach the subject in a purely journalistic fashion. But as I began to see that Bigfoot was also an experiential phenomenon in which the observer and observed were inextricably linked, I realized that the process couldn’t just be a clinical and detached weighing of the arguments for and against the creature’s existence.

British scholar Iain McGilchrist writes in his book, The Master and His Emissary: The Divided Brain and the Making of the Western World, “The nature of attention one brings to bear on anything alters what one finds; what we aim to understand changes its nature with the context in which it lies.”

In other words, how you look at something defines what you see—it determines what that thing becomes. To have focused solely on the question of Bigfoot’s physical existence, as compelling a question as it is, would have confined my exploration to one dimension of the creature. Likewise, it would have bound me to just one of two pre-determined answers.

Whereas the symbol of Sasquatch, whatever its zoological reality, is both potent and living, replete with layers of meaning. It reflects so many of our mental postures and is inextricable from our subjective perceptions and beliefs—including our motives to seek it.

I felt that to truly understand the Sasquatch, to somehow “see” it or catch its spirit, also meant tapping into the experiential and metaphorical contours that make up its being. That included suspending skepticism at times. It meant trying to see the Sasquatch through the eyes of my hosts and reliving their experiences of it. It involved seeing and feeling the creature by way of its landscape and habitat. It also meant plumbing the depths of my own deeply concealed biases, my emotions and motives, to understand what attracted me to the creature.

One general conclusion I draw in the book is that Bigfoot’s deepest significance is what it tells us about ourselves. That more philosophical avenue to discerning the creature is also embraced by writers Robert Michael Pyle and Daniel C. Taylor in their books, Where Bigfoot Walks and, Yeti: The Ecology of a Mystery respectively; and by journalist Laura Krantz in her recent podcast, Wild Thing. All of them see our pursuit of Bigfoots as a grasping for an ever-receding wildness within and without ourselves.

It’s a crucial viewpoint which I also explore in my own work. But could the lessons of the Sasquatch run even deeper? Might the Matryoshka doll of wildman meaning yield yet another avatar of significance from within? Could the creature be desperately trying to point out our deepest ruts of perception and behavior through the very way we see and interact with it?

While the Sasquatch mocks us, it also holds out the answer for us. It is a recipe for our salvation: we need to be more like it.

Our emphasis on the question of Bigfoot’s physical existence, our fixation with the literal creature, and our compulsion to either classify or debunk it—to the exclusion of other aspects of its being—is reflective of our deeply dualistic way of seeing. We are a culture and civilization ruled by the tyranny of the left hemisphere of the brain. Our thinking is linear, “either/or,” and is underscored by logic, acquisitiveness, and the need for certainty.

Wider reality, which certain physicists and mystics tell us is comprised of holistic, fluid, and interconnected sets of relationships—not objects—is reduced by us to a fragmented hodgepodge of disparate things and ideas. That approach to “seeing” has helped us to manipulate material reality and build our civilization. But taken to myopic extremes, it is also at the root of our undoing, as many problems from the environmental crisis, to the increased mechanization of life through AI and digital means, to our senseless tribal bickering so amply demonstrate.

This is not lost on the Sasquatch. In the very deepest sense this is what Bigfoots are steering clear of in their efforts to avoid us. The most poignant aspect of this phenomenon, and perhaps the most convincing indication that Bigfoot may be a spirit or emanation of Nature writ large, is the creature’s dogged refusal to be detached from its environment. Perhaps we can’t capture or tease out the Sasquatch because it is inseparable from its context. In a way, like God, it can’t be extracted wholesale from its surroundings: the nature it partakes in. It sidesteps our best attempts to outline, classify, and render it into an object—whether through the acquisition of body parts, bones, scat, and excellent photos. Perhaps like all other beings, it can only truly be and remain a Sasquatch in relation to its whole. Maybe, at best, we can only caricature it.

As befits a creature of such subtlety, while it mocks us, it also holds out the answer for us. It is a recipe for our salvation: we need to be more like it. To create a healthier world we need to see more of the whole, rather than just the parts, and thereby lose our dangerous and growing penchant for fixed thinking, obsessiveness, and fanaticism. To do this, our thinking must become more nimble, nuanced, and flexible like the Sasquatch itself. Our perceptions should increasingly be informed by intuition and instinct which Bigfoots have in spades. Our attention, like that of the wildman, should constantly shift to keep abreast of the wider environment. In the same way that the creature can’t be pinned down, so too must we become less “here or there” with our convictions. Context and symbiosis have to become paramount.

We need to embrace what I would call “The Way of the Sasquatch”: to see the world from different points of view instead of doggedly clinging to just one.

Which brings me back to the incident at Cape Scott. Was it a real Sasquatch that announced itself by the lake? Perhaps. Maybe some Sasquatch investigators—and people who’ve truly seen the creatures—know something that most of us don’t have the information, experience, or insight to properly surmise.

If Bigfoot turns out to be a creature of our own mental making, then we have a conundrum of perception that’s just as mysterious as the Sasquatch itself. The journey simply becomes a different kind of quest for self-knowledge. Not one of primate lineages, but of how our minds translate wider reality. Nothing is lost. 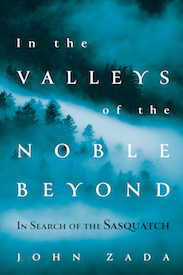 John Zada’s In the Valleys of the Noble Beyond is now available from Grove Atlantic.

John Zada is a writer, photographer and journalist drawn to stories about adventure and far-flung parts of the world. He has worked in over two dozen countries and spent years as a journalist in the Middle East. His work has appeared in the Globe & Mail, Toronto Star, Explore, CBC, Al Jazeera, BBC, Los Angeles Review of Books, and elsewhere. In the Valleys of the Noble Beyond is his first book. He lives in Toronto, Canada. 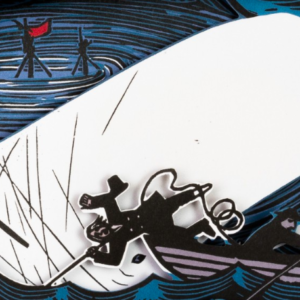 Two hundred years ago, Herman Melville was born and the course of American literary history changed forever. In celebration...
© LitHub
Back to top
Loading Comments...