On One of the Greatest Children’s Ghost Books Ever Published

First published in 1977,  Usborne’s The World of the Unknown: Ghosts was among the most treasured books (and anecdotally, the most stolen) in school libraries of the late 70s and 80s. Many of my friends—a disproportionate number of whom are writers and artists—remember poring over the pages of Ghosts, entranced by its eerie factoids and illustrations, and then filing it safely back on the shelf, far from our childhood bedrooms.

A few years ago one of the book’s charming info-graphics, “Why ghosts pass through walls,” circulated as a meme on social media. The deadpan explanation and matter-of-fact diagram are characteristic of the book’s tone: “Ghosts continue to follow the routes they used when alive, even if the house been rebuilt since that time.” Despite the pages devoted to exposing clever fakes and hoaxes, Usborne never tried to convince young readers that ghosts weren’t real. It read like a guidebook to an alternate universe.

When I tried to order a copy of the book for my kids, I discovered it had gone out of print. In my fruitless search for a used copy, I read that an Usborne staff member, Anna Howorth, had already started a petition to resurrect Ghosts. Inspired by a phone call from horror filmmaker Ashley Thorpe, who was searching for the book’s author, and by her own fond childhood memories, Howorth gathered anecdotes via Twitter to support her plea for a reboot. Her petition quickly exceeded the required 1,000 signatures, and Usborne scheduled Ghosts for re-issue in October 2019.

Ghosts wasn’t meant to be read aloud with a teacher or parent. It was meant to be discovered and then privately savored.

The book was re-released to some fanfare in the UK, home to Usborne and many grownup fans of the original, whom Howorth had speculated would be the book’s target market. Those fans included Ashley Thorpe, who has since directed the short film Borley Rectory—a rotoscope fantasia about one of England’s most notorious haunted houses that was inspired in part by his childhood fascination with Ghosts. Reece Shearsmith, member of the comedy troupe League of Gentleman and, more recently, co-creator of the darkly comic horror anthology series Inside No. 9, also credits Ghosts with shaping his twisted imagination; he provides the introduction to the new edition. With these endorsements and a word of mouth social media campaign, the book quickly rose to number one in its category, “Ghost Stories for Children,” on Amazon.uk, where it remains as of this writing.

The book’s author, Christopher Maynard, has by now written more than 50 books, many of them the same kind of richly detailed, heavily illustrated titles for young readers that Usborne pioneered with The World of the Unknown, which also included editions devoted to UFOs and monsters. These are the kinds of books teachers and school librarians favor, books packed with digestible nuggets of text and copious illustrations. Maynard says Ghosts was designed to be read “again and again . . . backwards and upside down . . . you color into it, and you rip it apart, and you draw from it. I think that’s where the longevity came from.” Ghosts wasn’t meant to be read aloud with a teacher or parent. It was meant to be discovered and then privately savored.

Maynard hooked young readers with ghost stories and graphics so he could open doors from those “campfire tales,” as he calls them, to history, geography, science, and literature. In Ghosts he references Julius Caesar, The Epic of Gilgamesh, world folklore, military history, church architecture, basic physics and photography and the Borgias. The book isn’t just about ghosts, though it remains delightful in its treatment of them; it’s an introduction to historiography and cultural studies via storytelling.

The new edition is an exact reproduction—the cover and all the contents and illustrations are all original. Just seeing the front cover was like unearthing a time capsule from my childhood, even though I grew up far away from haunted Britain, in a small town oustide New Orleans. Inside are the same images of phantom hounds, ghost ships and spectral monks that I’d committed to memory sitting cross legged in my uniform jumper on the floor of the library of Our Lady of Lourdes. I flipped to the faked spirit photographs of the 19th century and the reassuring “Ghost Stories Explained” pages, which include detailed diagrams of how the water level and sewer routes beneath a house might be the cause of strange knocks heard in the night. I found the same beloved oddities—including a talking mongoose named Gef from the Isle of Man (who now has his own Twitter account).

That infographic we’d shared on social media of why ghosts move through walls is just one of many. Another describes the “Duties of a Ghost,” like the chore chart hanging in my kitchen, except this list includes “return to avenge a murder” and “set right an injustice from which someone is still suffering” instead of “unload the dishwasher.” It’s a time capsule not just to my childhood, but to a time that never was—we didn’t really believe in ghosts in the 80s. But Ghosts approaches its subject with total earnestness.

That word is hauntology, and it was coined by Jacques Derrida to describe the yearning for a lost future.

Some of the graphics are dated (what is a tape recorder? my 9-year-old son wants to know). A ghost hunter relying on a battery-powered tape deck seems as strange to a contemporary kid as many of the book’s supernatural elements, and that’s part of the charm. The book has taken on an innocence that it didn’t have when I was young, one that feeds a pervasive nostalgia for our analog years. Now that I’m a parent worrying about real-life online predators stalking and abusing my kids on social media and gaming sites, the frisson of fear at the idea of capturing a ghostly voice on a tape deck seems pretty quaint. There are much more sinister unseen presences to fear.

There’s a word for that specific kind of longing for an earlier time—when technology held so much promise—a longing that grows from the despair at where technology actually brought us, which, we suspect, is the end of the world. That word is hauntology, and it was coined by Jacques Derrida to describe the yearning for a lost future. Hauntology is a slippery term, a portmanteau of the words haunting and ontology that implies the study of nonbeing but has been used to describe everything from a certain literary critical lens to a British musical genre. With its analog aesthetic, strong grasp of the uncanny, and odd conflation of fictional and actual history, Usborne Ghosts is textbook hauntology.

My kids weren’t nearly as impressed by Ghosts as I’d hoped, but then again, I knew it wasn’t really for them. My daughter is in her room trading images of composers drawn with an Apple pencil on an iPad Pro with an Instagram friend who lives in Canada, someone she met through an online chat for young classical music fans. My son is playing Fortnite with school friends—I checked their screen names to be sure—on his wireless headset. I spent the morning researching apps that will alert me to potential predators in both those spaces before returning to my copy of Ghosts, indulging in a weary nostalgia for a time when a light dusting of flour on the wood floor could alert me to the presence of an uninvited guest, and a book confirmed but contained my greatest fears so I could shelve them for another day.

Jessica Mesman is a widely published writer whose work has been noted in Best American Essays. Her first book, Love and Salt: A Spiritual Friendship in Letters, co-authored with Amy Andrews Alznauer, won the 2014 Christopher Award for “literature that affirms the highest values of the human spirit.” She is also the author of Strange Journey (2017). She has an MFA in creative writing from the University of Pittsburgh. Currently her work is taking her deeper into ecology, horror, and folk religion.

The Italian Women Who Resisted the Nazis with Stones and Willpower 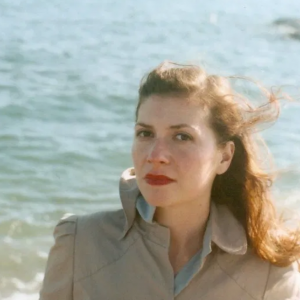 Elaine Kahn is this week's guest. Her latest poetry collection, Romance or the End, is available from Soft Skull Press. From...
© LitHub
Back to top