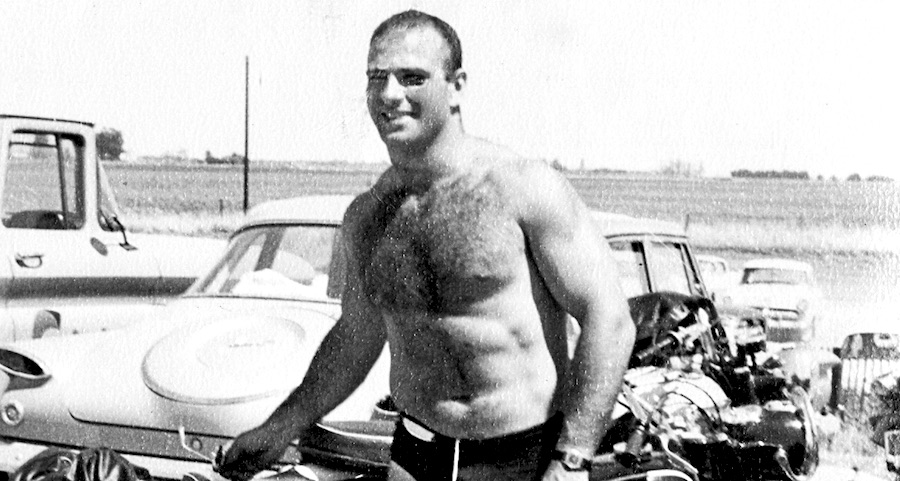 On Oliver Sacks’ Obsession With Weightlifting

What a Writer's Fitness Regime Can Tell Us About the Writing

When a writer talks about the sport they play, you can see something of how their mind works in how they have chosen to use their body. Hemingway’s frustrated fascination with machismo was written in bloodstains on the boxing and bullfighting rings. Haruki Murakami’s gentle, aimless prose is synchronized into the calm, solitary rhythms of running and swimming. David Foster Wallace’s hyperactive intellect was made for the twitch-reflex chess of the tennis court.

Oliver Sacks participated in many sports throughout his life, but never dedicated himself so completely to, nor expressed himself so clearly through, any quite like powerlifting. The part of his brain which took pleasure in mathematics was drawn to the sport’s numerical side. At one point, his routine was to back-squat 500 pounds for five sets of five reps on every fifth day, delighting in the neatness of this arrangement. At the same time, his medical mind was given free rein to treat his own body like a science project, bulking up into the sport’s heaviest weight category and maximizing his hulking form’s strength. And, like everything else in his life, he pushed himself as far as he could possibly go, culminating in a California State Record in 1961 with a 600-pound back squat.

The sport seemed to appeal to something deeper in him than his attraction to numbers and physiology. Sacks’s careers as both a doctor and a writer were defined by his quest to demystify the connections between body and mind, to understand how the lump of pink flesh and electricity inside our skulls could produce something as complex, contradictory, and variable as a human being. He pursued the idea of a self that sat somewhere between body and mind; a product of both, but exclusive to neither. As he enlarged and empowered his body, he looked to alter something about the self that it contained.

He explains this in his memoir, On the Move: “My motive, I think, was not an uncommon one; I was not the ninety-eight-pound weakling of bodybuilding advertisements, but I was timid, diffident, insecure, submissive.” Take a look around any given weight room and you will see this same desire played out in a hundred different forms by people working to build the version of themselves they would like the world to see. It is filled with people grunting and gurning their way towards a body that matches the inner self they would like to possess. Something bigger, stronger, with more impact. Boys growl into the mirrored walls, grafting under the strain of their own male gaze. Women sweat against the old ideas of delicacy and fragility, building bodies to break convention’s strangling molds.

Lifting is at once highly solitary—a solo sport in which most of your time is spent in competition with yourself—and highly communal. Even as each person pursues their own interior quest, the weight room makes everything public. All around you are fellow lifters to compare yourself to, their numbers lit up in yellows, blues and greens. They provide context for your achievements, a wide-angle view of how far you have progressed, how far you have to go.

Later in On the Move, Sacks relates an anecdote about his first time lifting at a new gym that will be immediately recognizable to anyone who has dabbled in the sport: “The first time I went there (The Central YMCA in San Francisco), my eye was caught by a bench press bar loaded with nearly 400 pounds. No one at the Macabi could bench-press anything like this, and when I looked around, I saw no-one in the Y who looked up to such a weight.” Having located the bench-presser in question and witnessed him in action, Sacks came away from the experience determined to lift more himself.

Watching someone double your bench press can make you wonder why you even bother. Being a freelance writer often feels very much the same.

I began lifting near the end of my undergraduate years, around about the same time I started writing. I could have been the “before” guy in one of the commercials Sacks mentions: a lanky stick figure without an ounce of fat or muscle to spare. I wasn’t a sporty kid and, by high school, I had accepted the idea of myself as a non-athlete as an inalterable fact of reality. From then on, rather than working to improve on my shortcomings, I sought ways to cover for them. I ducked sporting situations and, when involved, cracked jokes rather than risking sincere failure. The self-image I held in my head became a self-fulfilling prophecy for my body, as my outer self was shaped to match my inner one.

This continued well into my university days as I fed my body on caffeine, alcohol and candy while denying it sleep or nutrition. As a result, I could easily have fled the weight room after my first visit and never returned. The weaknesses I’d spent years learning to mask were suddenly exposed in the skinny limbs sticking out of my gym gear. But I put on my shoes for weightlifting and kept going and, slowly, I improved.

As my interest in the sport increased, it pushed me to feed my body the things it needed to function properly. It offered me a framework with which I could better understand the other aspects of my life, especially writing. It was not enough to have good intentions—to intend to work out more or harder—I needed a clear plan of when and how, otherwise lethargy and fear would kill the intention before it was enacted. The same was true of writing. I had always intended to write more but had never moved that desire beyond a fantasy, never expressed it out into the world and made it real. I had to alter the habits of my daily life.

This all flew in the face of my lackadaisical nature, but I stuck to it. And, slowly, I improved.

Oliver Sacks’ reaction to seeing someone soar above his level of ability is the one we would all like to have: inspired, motivated, determined. But it is so easy to be discouraged by the success of those around us. Watching someone double your bench press can make you wonder why you even bother. Your goals, which seemed so clear in your head a moment ago, suddenly seem to dissolve into the air; that person is a lifter, you are just someone who lifts.

Being a freelance writer often feels very much the same. You are always looking sideways, always tracking the progress of those around you and comparing it to your own. They claim a byline you have never managed or an award or a job title, and your heart can sink. Again, that hopeful place you have been working your way towards suddenly seems to vanish from your horizon. You have been exposed. They are a writer, you are just someone who writes.

But these comparisons almost always lack proper context. When we look at the person lifting next to us, all we see is the weight on the bar and how easily they can move it. We get a rough, visual sense of how their size compares to ours but we don’t see how long they have been training in the sport or how intensely. We don’t see the other factors in their lives—work, health, money—which can contribute or detract from their success.

It’s the same in writing. We see only the results, not the work: snapshots of success with all the necessary failures left out beyond the frame.

In On the Move, Sacks described his record-breaking back squat as his introduction to the weightlifting world, the “equivalent, in these circles, to publishing a scientific paper or a book in academia.” It was his opportunity to say “Here I am, look what I can do.” Whatever our passion or profession, this is what many of us spend our time in search of: a panacea for our imposter syndrome, a chance to announce, to the world and to ourselves, that we are good at what we do. That we are good enough.

Ross McIndoe is a freelance writer who lives in Glasgow with two small turtles and one small lady. He writes about all kinds of things but mostly books and movies. All his online work can be found via Twitter @OneBigWiggle.

Simon Critchley on Tragedy: Colluding in Our Calamity

Simon Critchley on Tragedy: Colluding in Our Calamity

As a first step, we might consider the most famous of the Athenian tragedies, the one that has been, since the time of Aristotle’s...
© LitHub
Back to top