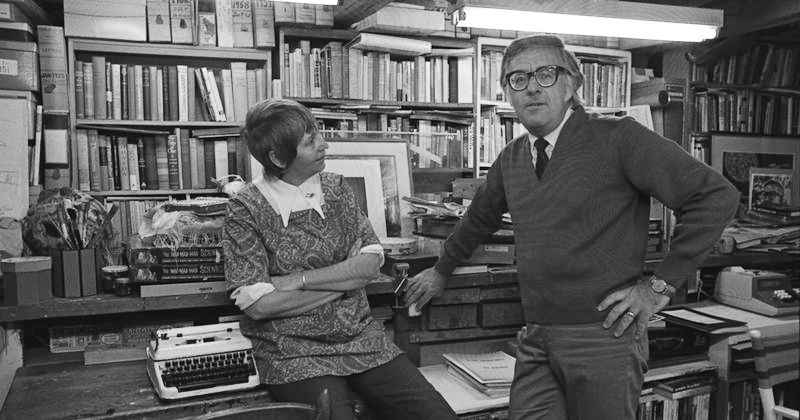 On Maggie Bradbury, the woman who “changed literature forever.”

Ray Bradbury met his first girlfriend—and his future wife—in a bookstore. But they didn’t lock eyes over the same just-selected novel, or bump into each other in a narrow aisle, sending books and feelings flying. It was a warm afternoon in April 1946, and 25-year-old Ray Bradbury—an up-and-coming pulp fiction writer—was wearing a trench coat and carrying a briefcase while he scanned the shelves at Fowler Brothers Bookstore in downtown Los Angeles. Naturally, Marguerite McClure—Maggie—who worked at the bookstore, “was immediately suspicious.” Someone had been stealing books, but hadn’t yet been caught. So she struck up a conversation. “I expected him to slam his briefcase down on a pile of books and make off with a few,” she said. “Instead, he told me he was a writer and invited me to have a cup of coffee with him.”

Coffee became lunch became dinner became romance; Maggie was the first woman Ray had ever dated, but he managed all right, and they were married on September 27, 1947.

Maggie got a job at an advertising agency so that Ray could stay and home and write—a very unusual arrangement indeed for a couple in the 1940s. “Marguerite made about $40 a week at her job, and I made about $40 a week writing stories at 1 1/2 cents per word for Astounding Stories, Weird Tales and other pulp magazines,” Bradbury said. “Ours was one of the first liberated marriages. I did my writing at home, cleaned the house and usually prepared dinner for both of us.”

“She took the big red rail car across the city each day to an advertising agency as her husband stayed home and wrote tales of the planet Mars and of altered realities,” wrote biographer Sam Weller. “His income was increasing exponentially, but without her guaranteed paycheck, he would not have had the luxury to focus on his fiction. . . The living history of books was shaped and changed because of her. Forever.”

The two were married for 56 years, until Maggie died in 2003; in that time Bradbury became one of the most beloved and influential American writers, no doubt at least in part, as Weller suggests, because he was able to devote so much of his energy to his craft. Also probably because he was pretty happy. We should all be so lucky!