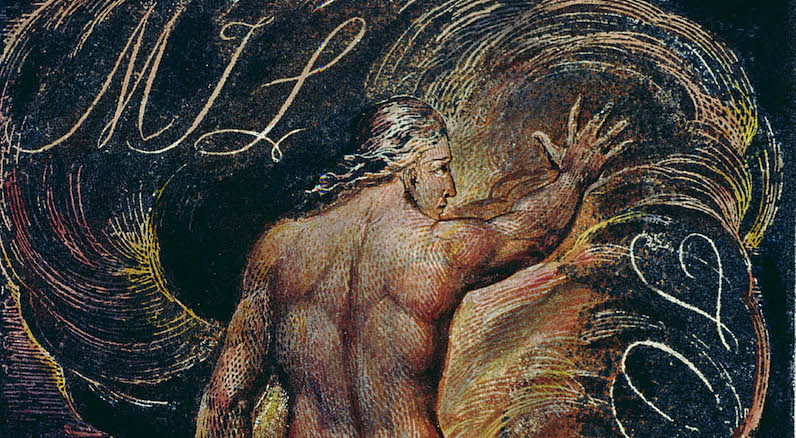 It’s John Milton’s 412th birthday—and we’re celebrating by taking a look at maybe the biggest Milton fanboy ever, William Blake. In a letter to his friend John Flaxman, explicating his influences, Blake lists Milton first: “Now my lot in the heavens is this; Milton lov’d me in childhood and shew’d me his face.” That influence is obvious throughout Blake’s work, which directly and indirectly engaged with Milton’s, as well as his personal life. Here are a few of Blake’s most hardcore fanboy moments:

He and his wife recited Paradise Lost together—naked.

According to an anecdote told by the Blakes’ friend Thomas Butts, when he came to visit the Blakes in their small summer house at Lambeth, Butts was stunned to see the Blakes completely naked. But Blake was unfazed: “Come in!” Blake purportedly cried. “It’s only Adam and Eve, you know!” The Blakes were simply reciting Paradise Lost, in character.

He made over 70 illustrations of Milton’s work.

Blake famously wrote in The Marriage of Heaven and Hell that Milton “was a true Poet and of the Devil’s party without knowing it.” Blake made that interpretation clear in his  visual depictions of Milton’s texts: he produced four different sets of illustrations on Paradise Lost, as well as on Milton’s works On The Morning of Christ’s Nativity, Comus, Paradise Regained, and L’Allegro and Il Penseroso. Blake, a card-carrying member of the Devil’s party himself, would have been a huge hit on DeviantArt.

He wrote an epic poem called “Milton” where Milton literally comes down in the form of a comet and gives Blake the gift of creativity.

In the poem, the spirit of Milton enters Blake through his foot, whereupon Blake dons a bejeweled sandal (which is the sensory world) and walks into the City of Art. Blake is ready to finish the creative work that Milton started.

The poem does engage in critique of Milton’s tendency to prioritise Reason, but come on. This is fanfiction with a self-insert. RL Smith, a friend of Blake, wrote that Blake said the poem was “recited to him by the spirit of Milton.” Okay . . . whatever you say, Will. (Also, the frontispiece for this poem was a picture of Milton looking extremely buff.)