On Jewish Community and Identity in Jacques Derrida’s Algeria

His name was not even Jacques Derrida.

I am looking for his grave. The cemetery at Ris-Orangis, the Paris outer suburb where Derrida spent much of his adult life with his wife, the psychoanalyst Marguerite Aucouturier, is as nondescript as the suburb itself. Windswept and heterodox, there are sections for Christians, for Muslims, for Jews, but they flow into one another, placed according to chronology and available space. The rows are Jewish, Christian, Christian, Muslim, Jewish, Christian, Jewish, Jewish, Muslim. I am not sure where to look.

Ris-Orangis is an hour’s drive south of Paris, snaking away from the Seine and back to it. There is a preschool here named after Derrida and one, incongruously, after Pablo Picasso. At the cemetery, two men in hi-vis jackets are blowing leaves and watch me striding up and down the rows, Christian, Muslim, Jewish, Jewish, Jewish, Muslim. I nod at them and do another lap, searching for Jacques Derrida.

The grave is not in any specific section. Facing a wooden fence is a simple slab of marble on which his name is chiseled. He is Derrida, yes, but the first name is the one he was born with, and it is written too far away from his surname, as though it was a last-minute decision not to write Jacques, with its fat q and u. On his grave, as on his birth certificate, and as to his friends, he is not Jacques. He is Jackie. Born Algiers 1930. Died Ris-Orangis 2004.

It is not known in which of the cinemas in Algiers Haim Aaron Prosper (Aimé) Derrida, a wine merchant like his own father, Abraham, and Georgette Sultana Esther Safar, daughter of Moise Safar and Fortunee Temime, saw Charlie’s Chaplin’s first full-length feature film, The Kid, or even if they saw it together, although the release date of 1921, the six to eighteen months it took films to transfer from Paris to Algiers, and their marriage in 1923 make it tempting to believe that they did. There were between fifteen and twenty cinemas in Algiers at the time, most of them named—in a way that was to haunt Aimé and Georgette’s third son—after their equivalents in Paris, including Le Vox, Le Majestic, Le Splendid, Le Cameo, Le Regent, Ciname Musset, L’Empire, Le Bijou, L’Alhambra and Le Colisee.

Chaplin was a superstar in Algiers, as he was throughout the world. While most films that transferred from Paris to Algiers, such as The Blue Angel, All Quiet on the Western Front and The Threepenny Opera played for a week—plenty of time for as many of the population of 400,000 to see them if they wanted—Chaplin’s 1931 film, City Lights played for six weeks in the spring of 1932. For many Algerians—then as now—the little tramp represented the little man fighting against the oppressors.

The question of where the Juifs d’Algérie, the community into which Jackie was born, fitted into Algerian society was, inevitably, a complex one.

Chaplin himself visited Algiers in April 1931, but was forced to cancel all of the excursions his hosts had planned—to the Tomb of the Christian Woman, the funerary monument to the Berber King Juba II and Queen Cleopatra Selene II, daughter of Cleopatra and Mark Antony—as the crowds that followed him everywhere, crying “Charlot, long live Charlot” were too large. As he wrote in his travelogue A Comedian Sees the World, “With all his Omar Khayyam philosophy, the Arab is an enthusiastic film fan, for when we arrived thousands were lined along the road all the way to the hotel.” In private he was less charitable, saying to his travelling companion, the actress May Reeves “What an unbearable race. Every cobbler takes himself for a sheik, although he is less than nothing! Enough of Arabs and these beastly Algerians, let’s go back to France.”

It is unlikely that Chaplin, mostly trapped in his hotel, passed down the propitiously named rue Saint-Augustin. Had he, the adoring fans may have been joined by Aimé and Georgette, their eldest son René Abraham, and their babe in arms less than one year old in 1931, a boy they named after Jackie Coogan, the star of Chaplin’s The Kid.

Jackie was born at daybreak on July 15, 1930. His mother was “playing poker (already, always!) at my birth,” he wrote. Georgette was a week short of her thirtieth birthday (Aimé five years older), and her passion for poker lasted all her life. And yet it may be that the game was a way of distracting herself; only ten months earlier she had lost her second child, Paul, at three months old. The Derridas had, it would seem, chosen a quick, but risky, way to assuage their mourning.

This older brother haunted Jackie throughout his life. In his “Circumfession” (written between visits to his mother, dying in hospital, he would call the book “a kind of vigil, a wake”) he described himself as existing “in the place of another.” The death of Paul, it is impossible not to speculate, was responsible for the birth of Jackie.

Jackie’s relationship with his mother was particularly intense. He was a boy who “up until puberty cried out ‘Mummy I’m scared’ every night” until, in an echo of the narrator in Proust, his parents allowed him to sleep each night on a divan beside their bed. Georgette, he would later write, was not a very demonstrative or affectionate mother. She did not just keep her poker face for the card table.

The Algeria into which he was born was, in 1930, in the midst of an ambiguous celebration. Ten days before his birth was Le Centenaire de l’Algérie française, the hundredth anniversary of French colonial rule. There had been six months of celebrations, artistic, cultural and sporting.

The French president, Gaston Doumergue, unveiled a nine-meter monument on the beach at Sidi Ferruch, 30 kilometers west of Algiers, the spot where 34,000 French soldiers commenced their invasion in 1830. The monument featured two entwined female figures, one representing France, looking maternal and protective, and the other representing Algeria, seeking guidance and protection. In his speech Doumergue said “The celebration of the centenary will show in a decisive fashion the human, peaceful, just and beneficial character of the French colonization methods and of the work of civilization she is pursuing.” The new Musée des Beaux Arts was opened in Algiers, as was an Exhibition in Oran—each Pavilion on its five hectares allowing people to tour all of Greater France in a day. Even Charlie Chaplin had, it was rumored, been invited, but was unable to attend as he was shooting City Lights. The Commissioner General of the Centenary, Gustave Mercier saluted “another France, barely hundred-year-old, already strong, full of life and future, uniting in its happy formula Latin races and indigenous races, in order to make them all French races.”

Eighty thousand tourists visited Algeria in the course of the year, attending its old and new attractions, indulging in the Orientalist thrill. As James McDougall writes in The History of Algeria, settlers “saw their security of livelihood, home and person as dependent on the continued subjugation of Algerians, the ‘native peril’ whom they saw through a confused combination of racial and religious stereotypes, exotic fantasies, imagined paternal benevolence and, from time to time, hysterical terror.” Frantz Fanon, the Martiniquais psychiatrist and political philosopher who would chronicle the Algerian independence struggle, would go further, noting it is always the colonizer who is seen to make history: “His life is an epic, an odyssey. He is the absolute beginning. A compartmentalized Manichean and immobile world, a world of statues: the statue of the general who conquered the country, the statue of the engineer who built the bridge.” By contrast the natives were part of the landscape and thus dehumanized.

The question of where the Juifs d’Algérie, the community into which Jackie was born, fitted into Algerian society was, inevitably, a complex one. Derrida’s family were Sephardic, and claimed roots from Toledo in Spain. In 1870, Algerian Jews were granted French citizenship by the Crémieux Decree, which brought their rights in line with the rest of the pied-noir (black foot, i.e. wearing shoes) population of Algeria. The majority Muslim population had no such rights, and were subject to the Code de l’indigénat, which gave them, at best, second-class status before the law. Although tensions had not reached the scale that would lead to and accompany the Algerian War, they were already present. At the same cinemas where Aimé and Georgette had watched Chaplin, Algerians “clapped and cheered when the hero made stirring speeches about Swiss independence in William Tell and when the Foreign Legionnaire heroes in Le Hommes Sans Nom(The Men with No Name) were shot by Moroccan insurgents.”

In addition, the Jewish population’s relationship with the rest of the pied-noir population often mirrored tensions present in France—as one account puts it, for European settlers “anti-Semitism tapped into […] perceptions of themselves as ordinary, hard-working people. Jews were held up as a rich and exploitative breed intent on dominating French Algeria.” Derrida’s grandmother, for instance, had to marry “clandestinely in the back courtyard of a town hall in Algeria, because of the pogroms (this was in the middle of the Dreyfus affair).” Despite the clandestine wedding, Jackie’s grandmother was part of an “extraordinary transformation of French Judaism in Algeria.” Where the generation before had been close to the Arab population in language and customs, she was “already raising her daughters like bourgeois Parisian girls (16th Arrondissement good manners, piano lessons, and so on).” Then, writes Derrida,

came my parents’ generation: few intellectuals, mostly shopkeepers, some of modest means and some not, and some who were already exploiting a colonial situation by becoming the exclusive representatives of major metropolitan brands: with a tiny little office and no secretary, one could, for example, become the sole distributor of all the ‘Marseille soap’ in Northern Africa (I’m of course simplifying a bit). Then came my generation (a majority of intellectuals: liberal professions, teaching, medicine, law, etc.).

This gradual assimilation—and, indeed, embourgoisement—of the Jewish population into Algerian French life saw forenames Gallicised and Jewish religious sites and practices Christianized—”an insidious Christian contamination,” Derrida later called it. The synagogue was called the temple, bar-mitzvah called communion, and circumcision called baptism. Derrida later spoke of a quasi-subgroup, “indigenous Jews,” who could identify neither with the “models, norms or values” of the French population, nor of the Arab.

“Ay, you want me to say things like ‘I-was-born-in-El-Biar-on-the-outskirts-of-Algiers-in-a-petty-bourgeois-family-of-assimilated-Jews-but …’ Is that really necessary? I can’t do it.”

This “disorder of identity” could be staggering in its complexity. “In the milieu where I lived,” Derrida wrote, “we called all non-Jewish French people ‘Catholics,’ even if they were sometimes Protestants, or perhaps even Orthodox: ‘Catholic’ meant anyone who was neither a Jew, a Berber nor an Arab.” At the same time, settler anti-Semitism in Algeria fed anti-Semitism in France—Algerian Jews were seen as part of the “native peril”—”Arabs of the Jewish faith.”

It is, of course, biographically reductive to see in this mélange of identities, of the politics of naming, of contested languages, contested selves and overlapping boundaries, the origin of deconstruction—leaving aside Derrida’s problematizing of “origin.” Asked in 1983 “where it all began,” Derrida responded “Ay, you want me to say things like ‘I-was-born-in-El-Biar-on-the-outskirts-of-Algiers-in-a-petty-bourgeois-family-of-assimilated-Jews-but…’ Is that really necessary? I can’t do it.” 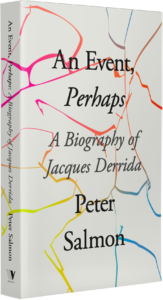 Peter Salmon is an Australian writer living in the UK. His first novel, The Coffee Story, was a New Statesman Book of the Year. He has written for the Guardian, the New Humanist, the Sydney Review of Books and Tablet, as well as Australian TV and radio. Formerly Centre Director of the Jon Osborne/The Hurst Arvon Centre, he also teaches creative writing. 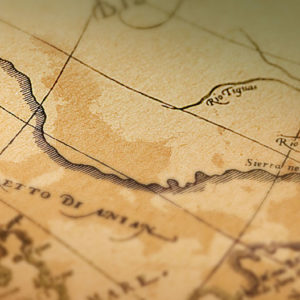 On September 22nd, McGill University, in partnership with Literary Hub announced the shortlist for the Cundill History Prize. The...
© LitHub
Back to top