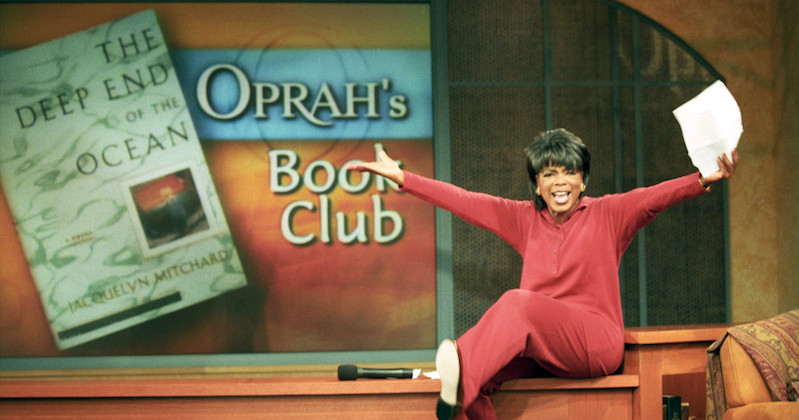 On its 25th anniversary, here’s a look at Oprah’s Book Club—by the numbers.

25 years ago today Oprah Winfrey launched what would soon become the most powerful and influential force in American publishing: Oprah’s Book Club.

Each month for over fourteen years, the beloved talk show host, cultural tastemaker, and undisputed “Queen of All Media” would recommend a new book (usually a work of literary fiction) for her legion of viewers to read and discuss.

OBC quickly became a phenomenon, catapulting dozens of authors (some established, some new, some famous, some languishing in near-obscurity) to the top of the New York Times bestseller list. Nigerian debut author Uwem Akpan’s 2008 short story collection Say You’re One of Them sold nearly 800,000 copies after receiving the Oprah endorsement. The sales bump for Cormac McCarthy’s The Road was somewhere in the region of 1 million copies. And, of course, Oprah’s championing of the novels of Toni Morrison (four of which were selected as OBC picks between 1996 and 2002) brought the 1993 Nobel laureate’s work into the homes, minds, and hearts of millions.

Now nine years into its digital media-focused second incarnation, Oprah’s Book Club (2.0) may not be quite juggernaut it was back in it’s early-2000s heyday, but as authors like Cheryl Strayed, Colson Whitehead, and Isabel Wilkerson can surely attest, the “Oprah Effect” is still very much alive and well.

Here’s a look back at some of the major stats and stories from a quarter century of Oprah’s Book Club.

Most appearances by a single author: 4

Estimated extra copies a title was expected to sell after Oprah’s endorsement at the peak of her club’s popularity: 500,000

Franzen’s midwestern family saga The Corrections is chosen as the September 2001 pick. After the announcement is made, Franzen expresses displeasure at being in the company of other Oprah’s Book Club authors, saying in an interview that Winfrey has “picked some good books, but she’s picked enough schmaltzy, one-dimensional ones that I cringe, myself…” Soon after, despite Franzen’s apologies, his invitation to appear on Oprah’s show is rescinded. Nine years later Oprah selects Franzen’s next novel, Freedom, as the September 2010 OBC pick.

Oprah selects James Frey’s A Million Little Pieces—a supposedly true account of Frey’s life as an alcoholic, drug addict, and criminal—as the September 2005 title. It becomes the Book Club’s biggest selling title up to that point. When allegations surface that Frey has filled the memoir with embellishments and outright lies, Oprah invites both Frey and his publisher Nan Talese on to her show, and proceeds to eviscerate them both for deceiving her and the reading public.

In January 2021, Oprah selects Jeanine Cummins’ American Dirt—a novel about a Mexican woman fleeing to America with her child after being targeted by a vicious drug cartel—as her next OBC 2.0 pick. Critics accuse Cummins of relying on stereotypes to paint an inauthentic picture of Mexican migrants, exploiting their trauma and pain for profit. 142 writers sign an open letter to Oprah, asking that she reconsider her endorsement of the book. Oprah and Cummins, alongside a panel of Latina writers, then attempted to grapple with the American Dirt fallout in a two-part Apple TV+ episode.

Kate Elizabeth Russell’s debut novel My Dark Vanessa—about a young woman confronting the abusive relationship that defines her sexual and romantic past—is selected for the March 2020 pick. In the wake of the American Dirt controversy, and without having read the novel, Wendy C. Ortiz accuses Russell of plagiarizing her 2014 memoir, Excavation. Russell is forced to release a statement explaining to readers that her book is based on her own personal experiences of sexual trauma. Despite critics finding no evidence of plagiarism, My Dark Vanessa, which Russell had worked on for nearly 20 years, is dropped by Oprah’s Book Club.