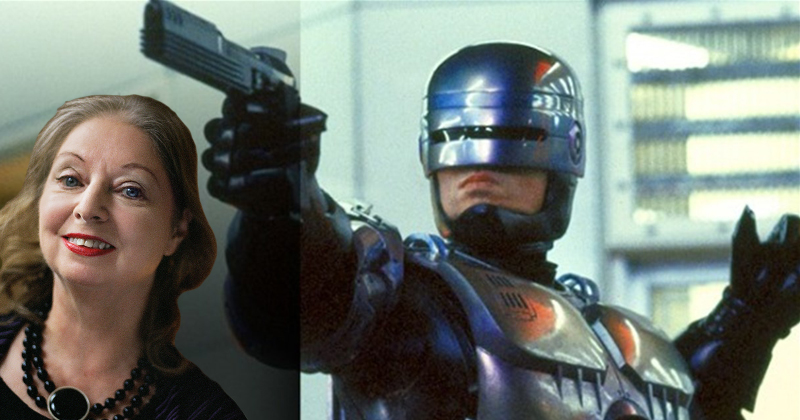 On Hilary Mantel’s birthday, please enjoy her 1988 review of RoboCop.

But you probably knew that. What you might not have known was that Mantel was the film critic for the UK’s The Spectator for four years, between 1987 and 1991, during which time she reviewed many films, including Overboard (“God bless us all. And send us better films next week.”), The Accused (“Economy is commendable, but a woman in all her complexity cannot be represented by a pair of outsize shoulder-pads.”), and Fatal Attraction (“A quite unremarkable film in most ways, with its B-movie conceits, cliché-strewn screenplay and derivative effects.”).

She also reviewed RoboCop—and rather enjoyed it:

“F—— me!” cry the criminals, as RoboCop blasts them into the hereafter. Rapists, robbers, terrorists are minced before our eyes. Villains are blown apart, defenestrated, melted down into pools of toxic waste. “You have the right to an attorney,” the courteous robot voice reminds them, as he tosses them through plate glass. The pace is frenetic. The noise level is amazing. You absolutely cannot lose interest; every moment something explodes.

What to make of it? The film industry has never been sure about this director’s work. His 1975 film Turkish Delight was nominated for an Oscar as best foreign-language film, but was marketed in the UK as soft porn. He has done well, in his own terms, to leave Holland for Hollywood: he says “the whole cultural baggage of Europe is on our shoulders and it is pushing us down.” The ambiguity in his work remains. RoboCop is either a fascistic blood-ballet or clean satirical fun. Wimpish critics are muttering about the scene where Murphy—the human Murphy—is comprehensively shot; but you have seen worse in Vietnam films. Their violence is excused because of the directors’ intentions, which are often impeccably liberal; but these intentions seldom cut much ice with the ordinary cinema audience, who drool—if drooling is their bent—just the same. No yobs will be spurred to imitate violence by the film. They lack the hardware.

The film is energetic, visually brilliant and very funny, with a sharp script that is never allowed to hold up the carnage. Its violence is spectacular, totally unrealistic, and—who knows?—perhaps quite therapeutic. All in all, it provides a stimulating evening for those who can jettison the “cultural baggage”; and a pure delight for those of us who have never had any culture at all.

Damn, but she is a brilliant writer, no matter what she’s writing about. You can read the whole thing here, and I recommend that you do. And then go watch RoboCop. I have it on good authority that it’s therapeutic.