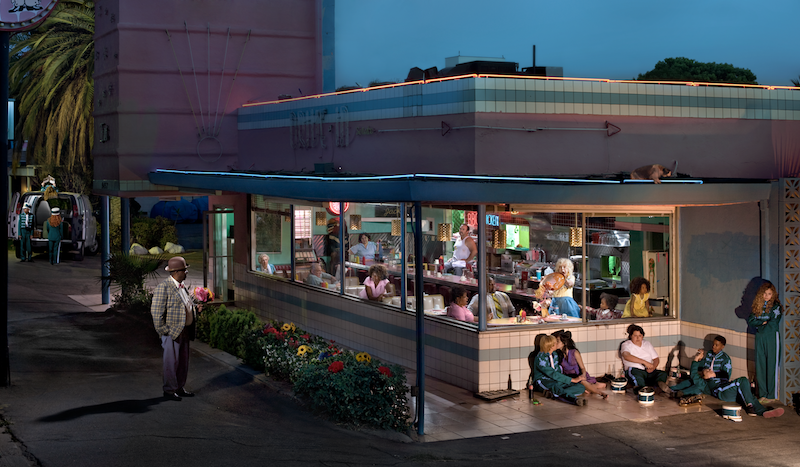 VIA THE MISSOURI REVIEW

A Brief History of Tableau Vivant and Staged Photography

In Edith Wharton’s novel The House of Mirth, the Wellington Brys, a couple insecure about their social standing in New York society, want to attract new friends. To succeed they must pull off a bold party.

After careful thought, the “two baits” they use are an evening of expensive music and tableaux vivants, a series of living pictures popular among upper-class Victorians. The Brys enlist a dozen fashionable young women and costume them as characters from paintings by Goya, van Dyck, Titian, and Watteau. The women model scenes of nymphs dancing across a patch of flower-strewn grass or garlanding an altar, until the final red velvet curtain opens on Lily Bart, the novel’s protagonist, presented without artifice. She is herself the work of art. While this moment marks Lily’s social triumph, it also displays the era’s love of the art of staging. With attention to lighting, costumes, props, backdrops, and set pieces, they recreated lushly theatrical scenes from classical art.

Of the constructed tableaux, Wharton writes, “To unfinished minds they remain, in spite of every enhancement of art, only a superior kind of wax-works; but to the responsive fancy they may give magic glimpses of the boundary world between fact and imagination.”

In the late 18th century, Lady Emma Hamilton, wife of the British ambassador to Naples, introduced what she called “attitudes” to European society. Draped in a simple shawl, her hair down around her shoulders, she used gesture and expression to transform herself into figures from classical sculptures and vases. Though at first they considered it improper, Victorians could not resist the performative charm of Lady Hamilton’s attitudes, and the popular entertainment quickly evolved into elaborate tableaux. Transformation into imaginary characters offered a socially acceptable way of flaunting a woman’s beauty; she could let down her hair, kick off her slippers, and slip into a revealing costume. Trying on alter egos represented a form of emancipation from rigid social roles. 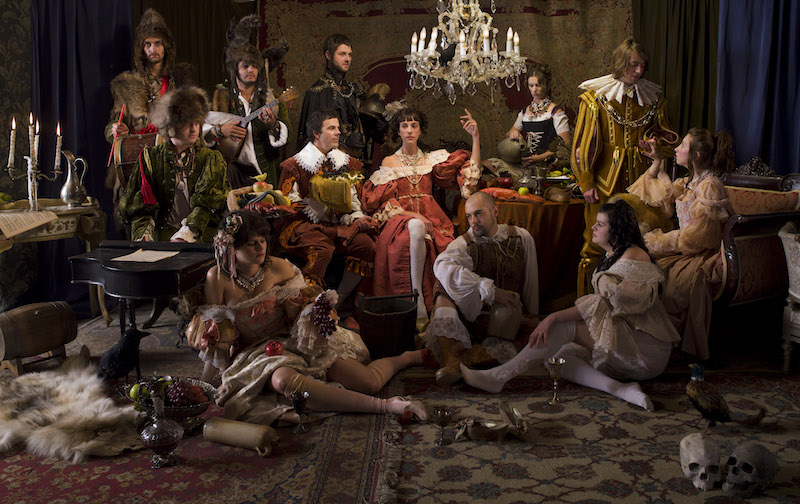 When photography was invented in 1839, the familiar practice of role playing and staging scenes for tableaux became a natural subject for the new medium. People were quick to grasp the potential of the photograph as a virtual stage. Photographers became directors, posing “actors” and choosing the sets, props, and costumes, determining the lighting and placement in implied narratives. Early examples of the influence of tableaux vivants on Victorian photography are plentiful. At an estate near Scotland, between 1843 and 1847, English photographers David Octavius Hill and Robert Adamson made photographic illustrations of scenes from Sir Walter Scott’s novel The Antiquary, posing their figures in front of hand-made backdrops and using atmospheric lighting. For his photographs, Swedish-born Oscar Gustave Rejlander hired actors from traveling tableau vivant groups and arranged them like theatrical performers in front of a backdrop painted with a landscape and framed by a large curtain on either side. Charles Darwin later hired him to shoot several photographic illustrations for his book The Expression of the Emotions in Man and Animals. Julia Margaret Cameron cast well-known public figures as characters in her neighbor Alfred Lord Tennyson’s poem Idylls of the King, a retelling of the Arthurian legend. The pictures have a homespun quality as her models pose in swaths of fabric against folding screens and tapestries. For his photographic illustrations of Saint George and the Dragon, Lewis Carroll used exotically dressed children in the starring roles, turning the legend of the patron saint of England into a fairy tale. These Victorian photographers told stories through their images, demonstrating the allegorical and narrative potential of this new art form.

The Pictorialists—practitioners of a movement led by photographers Holland Day, Gertrude Käsebier, William Mortensen, and Harold Kells—flourished from about 1880 to 1920, claiming Cameron as an inspiration. They were enchanted with photography’s capacities for narrative and fantasy and were particularly interested in imitating classical paintings that they staged as tableaux for the camera. Wanting to elevate photography to the status of painting, they believed in using the medium in an uncritical, unselfconscious way. This group persisted well into the twentieth century, yet their themes—virtues of childhood, motherhood, and nature—were regarded as increasingly sentimental. In the 1930s, when the movement waned, many Pictorialist photographers found work in Hollywood, their approach having a strong impact on  the development of cinematography and the epic creations of Cecil B. DeMille, Fritz Lang, and D.W. Griffith.

The critical attitudes toward staged photographs began to change drastically. A tug-of-war between the photography of fact and the photography of fiction began to play out, with some artists taking sides while others employed elements of both. The Surrealists undertook forays into staged photographs as they utilized an arsenal of techniques in their imagistic experiments. They were open to exploiting every potential avenue  photography had to offer as they explored their visions of dreams and nightmares. Some of the photographic work of Man Ray and Marcel Duchamp embody the approach of free experimentation, favoring a spontaneous assemblage of props and friends, mostly fellow artists, to create their fantastically surreal tableaux.

Yet the practice of staging was increasingly viewed with skepticism and suspicion. Rebellion against the staginess and imitativeness of the Pictorialists and the alienating effects of the avant-garde’s camera experiments came to a crisis during the Great Depression. Embodied in the work of Alfred Stieglitz, Paul Strand, and Edward Weston, documentary photography gained dominance as it sought to relate the social and political issues of the time. The search for authentic engagement resulted in an anti-theatrical bias and the repudiation of posed photography. A common credo of the 1940s was that photography should commit to the truth: 90 percent eye and 10 percent head. “Straight” photographers demanded that an image was found, not invented, and should remained unaltered, honoring a commitment to objectivity and realism.

By the early 1960s, “straight” photography had arrived at a pictorial dead-end, while the 1970s ushered in a period of conceptual photography that played with process, manipulating the ways angle, detail, focal length, exposure time, film type, and even paper influenced an image. The playful emphasis on arranging and constructing an image set the stage for a resurgence in staged photography, nudging aside the predominance of straight photography and its inflexible dictum of recording the facts. Terms such as “narrative,” “storytelling,” “anecdotal,” and “story creation” were once again part of the medium’s vernacular. Work became more theatrical as photographers exposed the artifice of making a picture. By the 1980s, the arranged, constructed, and staged photograph was once again popular. Like the Victorians and Pictorialists before them, photographers approached their work like a film director, moving from a developed idea or “script,” then constructing set and assembling costumes, props, makeup, and performers to create fictional events from history, legend, mythology, and daily life.

What Wharton wrote in 1905 of tableaux is also true of contemporary photography; it is much more than a “superior kind of wax-work.” After 170 years, the medium has come full circle, returning to its impulse toward the theatricality of the constructed image. The beloved parlor game of the Victorians influences the work of many fascinating, diverse contemporary photographers, as illustrated by the seven included in this piece. 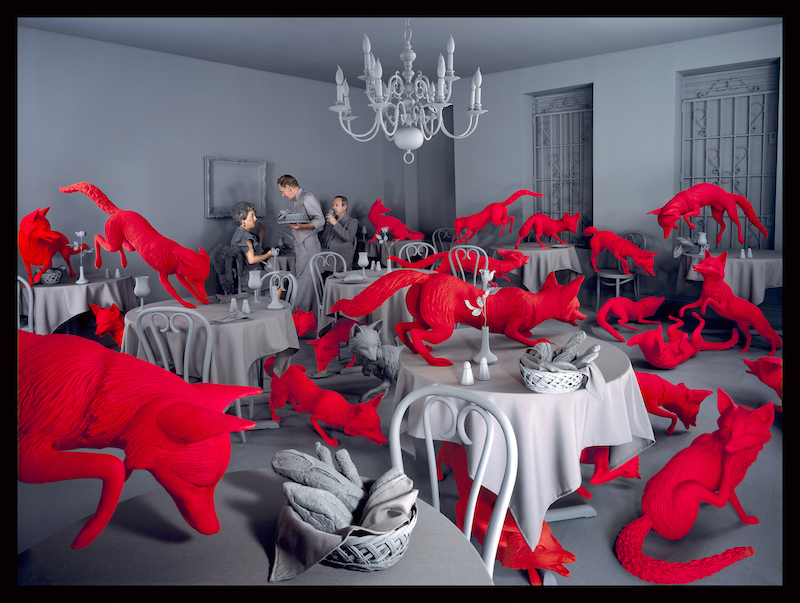 In three photographs from her series Dining Room, London photographer Sarah Jones carefully stages female teenagers in an elegant social milieu. The young beauties are at times poised, enigmatic, and simply bored, as they divert their eyes, seemingly aloof. Her tableaux are care- fully set to offer glimpses into adolescence as the subjects navigate the dynamic of self and each other in a limited social space—the dining room. Los Angeles photographer Ryan Schude’s pictures are lavish productions that take days of preparation in the orchestration of lighting, props and actors. The Diner and The Saturn are representative of Schude’s dramatic narratives of places and the people who populate them. In his series In the Playroom, Canadian photographer Jonathan Hobin creates images of children’s play with a twist; his kids are reenacting infamous moments from history. Like Schude’s work, each of Hobin’s images—The Twins, Triple Threat, and DIANA’S DEAD—are painstakingly planned and constructed, as he conveys children with an air of innocence and satisfaction playing out catastrophic historical events.

Sandy Skoglund’s surrealist images are the result of building elaborate installations that show fanciful scenes: a skulk of red foxes invading a dining room or a school of goldfish swimming through the blue bedroom of two boys. Similarly, the world of Dorothy O’Connor’s photos begins as installations that take months to complete. In Ceiling of Blackbirds and Tornado, two images from her Scenes series, the natural world invades domestic spaces. Like Skoglund, O’Connor works in the surrealist tradition, taking inspiration from her dreams and giving it free reign in her artwork. Montreal-based artist Adad Hannah’s tableaux vivants enact famous paintings often presented in three media: a live tableau, a photograph, and a video. His restaging of The Raft of the Medusa took three months of preparation, 1000-square-foot backdrop and 22 actors.

As a writer, Wharton clearly appreciated the storytelling and creativity at the heart of the tableau vivant, as well as its ability to play with the boundaries between fact and imagination. The work of these seven talented artists has returned the staged image to its place of prominence in the photographic canon. Their often-fanciful images brimming with texture, detail, and color freeze-frame surprising and dramatic moments. Many of the scenes took months to stage, as the artists freely combined the real and the invented—photography, painting, and stage design— while weaving contemporary, historical, and mythological references in ways that delight and entertain.

This piece originally appeared in Volume 40 of The Missouri Review.

Kristine Somerville's visual and "Found Text" features appear regularly in the Missouri Review. Her short stories, nonfiction, and prose poems have been published in a variety of magazines, including the North American Review, Passages North, Quarterly West and New Voices from the Academy of American Poets.

Rebecca Solnit on a Childhood of Reading and Wandering 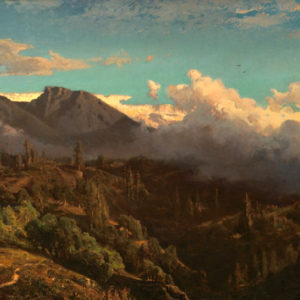 Rebecca Solnit on a Childhood of Reading and Wandering

This essay is adapted from a talk given at California's Novato Public Library earlier this year. There are ecological...
© LitHub
Back to top
Loading Comments...