Laurie Sheck Gets Lost in a Sea of Infinite Links

I probably should have known. After all, the piece of contemporary writing I’ve been returning to with increasing curiosity and awe over this past year is Nick Montfort’s and Stephanie Strickland’s vast, sprawling Sea and Spar Between, a digital poetry generator composed of highly structured yet almost endless-seeming combinations of words derived solely from Emily Dickinson’s poems and Herman Melville’s Moby Dick. A radiant sea of words, the number of its stanzas is “comparable to the number of fish in the sea, around 225 trillion.” And like the earth’s oceans, or the multiverse, it has no discernible beginning, middle or end. No focal point at all. Its feeling is of a structured, echoic multiplicity in which the smallest word change, like the thinnest, glittering crack, makes possible a fresh angle of sight. Every time you go to the site you enter in a different place, each reverberant of the many others. This morning I started here:

The screen looks spacious, punctuated by rows of three two-couplet stanzas evenly spaced. You can scroll up or down or jump to other word-clusters in far-off places. Wherever you go echoes are everywhere present:

To write a piece of 1,500 words or so for the internet doesn’t sound particularly daunting. Fine, I thought, a day, two days, maybe even an afternoon, and it will be done. After all, I had recently completed a 450-page book, and before that a book I cut back to 520. Sometimes I’d hear Hamlet’s words words words echoing in my head, but I loved writing them, and loved, too, the research involved.

I love this digital poem, Sea and Spar Between, yet I don’t own a smart phone and have never sent or received a text message.

I am fascinated by the possibilities of the internet but barely know what an app is, or how to stream a movie and probably even worse—I still use AOL! I very recently got a Gmail account but have been too intimidated to take the plunge and finally “switch over.” What if everything gets lost!

It’s a given that the internet is, among other things, a site of warring impulses and intense contradictions. Attention spans are “short’ yet the web is vast—full of intriguing linkages, surprises, uncanny connections separated by immense stretches of space and time, sort of like Einstein’s “spooky action at a distance” where particles, even at opposite ends of the universe, exist as essentially entangled, and react as if one and the same.

I don’t know that I could have moved from writing poems to hybrids without access to the internet’s chance encounters. Even now I wonder what weird leaps from link to link and site to site lead me from Mary Shelley’s Frankenstein to Cao Xuequin’s Dream of the Red Chamber, from Venice and the plague to Dostoevsky. Sometimes it seems the more you follow the internet’s webbing and netting, the more it’s like a spider’s web—nothing linear but everything somehow connected to everything else. Mary W. Shelley, www.FindaGrave.com. Dostoevsky, F., in The Wisdom of Donkeys: Finding Tranquility in a Chaotic World. www.amazon.com.

And as in mappings of the human genome, there are long stretches that feel almost empty, numbing, dull.

1,500 words. Now that I had finished my two somewhat genre-less books, and missed them, the first centered around Mary Shelley’s “monster” and the Shelleys themselves, the second involved, in part, with Dostoevsky and his great novel The Idiot, I started to articulate to myself what I’d sensed all along: Shelley’s “monster” and Dostoevsky’s epileptic Prince Myshkin felt uncannily in certain ways almost like the same being. Even the twinning “m’s” of their names felt suggestive, like a finger pointing in a dream (though I didn’t forget, as if it would hurt him if I did—I felt that weirdly close to him—that the “monster” had no name). I would write about this. It interested me and if I worried about whether it could possibly interest anyone else, I’d be sunk, so I just figured I’d begin.

And always they were with me: the poignant, abandoned, in many ways beautiful monster with his salient questions, and the troubled Prince Myshkin whose epilepsy sets him apart, worlds breaking in him over and over.

And thus my nightmare began…

As with the writing of my books, everything kept leading to everything else. In many ways I was having a great time. Night was turning to day to night to day, a few paragraphs turned into a page then several pages, with no end in sight… I was entranced by the weird factoids I was discovering—the more I wrote and thought the more they seemed to proliferate like medical centers along roads with names like Route 1—except, unlike them, my factoids felt, at least to me, seductive, promising, enchanting.

The initial writing of both Mary Shelley’s Frankenstein and Dostoevsky’s The Idiot takes place in Geneva.

Feeling as if I had discovered a small island: Why hadn’t I noticed until now that both books begin with November? (Though Shelley subsequently moved her first sentence to the beginning of Chapter 5.)

“It was on a dreary night in November…” Mary Shelley writes on June 17, 1816, having had a clear vision of her monster the night before—she’d spent the evening listening to Shelley and Byron “talk of the experiments of Dr. Darwin… who preserved a piece of vermicelli in a glass case till by some extraordinary means it began to move with voluntary motion.”

“Towards the end of November, during a warm spell, at around nine o’clock in the morning, a train of the Petersburg-Warsaw line was approaching Petersburg at full steam.” Fifty-one years after the writing of Frankenstein and seventeen years after Mary Shelley’s death, from August until December 1868, Dostoevsky fills ten notebooks with at least eight often wildly contradictory plans, before sitting down to write that first sentence of The Idiot. (Shortly later he would throw most of the first part out and hurriedly write it over.)

Because this is to be short I will skip over the many convergences I lived among those days and nights which became weeks—from the births and deaths of beloved children during, or right before and after, the writing of each book; epileptic imagery in both; questions of beauty, ugliness, isolation; the irritable, critical attacks upon publication—charges of disproportion, lack of tact, preposterous exaggeration; the books themselves as ugly-beautiful monsters; how each is suggestive of Dostoevsky’s definition of reality—his “fantastic realism”; the central problem of the body for Myshkin and the monster… All they shared in terms of shame… grieving… helplessness… watchfulness… isolation… Even the monster’s and Myshkin’s tender, respectful feelings for donkeys; Mary Shelley’s isolation and shame, Dostoevsky’s years in prison—she a “fallen” woman, he a convict…

Suddenly it seemed urgent not only to know the immediate reviews of Mary Shelley’s book but the reviews placed before and after in each journal. Her book was said to be guilty of “leaving the wearied reader, after a struggle between laughter and loathing, in doubt whether the head or heart of the author be most diseased.” And: “The writer of it is, we understand, a female; this is an aggravation of that which is the prevailing fault of the novel…we shall therefore dismiss the novel without further comment.” From yet a third review: [the novelist’s] “power is so abused and perverted, that we should almost prefer imbecility.” Was the tone as snide in the reviews that bookended hers? It wasn’t. (An Historical Account of the Rise and Progress of the Bengal Native Infantry was one—the review positive, respectful.) What range of subject matter was covered in those other books? What got approval? And if only I could read Russian—why haven’t any of the initial reviews of The Idiot been translated into English? At least I found N.K. Mikhailovsky’s 1882 complaining, book-length essay, Dostoevsky: A Cruel Talent. (“He forces his characters to commit bizarre, fantastic crimes… so that they might suffer, suffer, suffer.”) There were films to watch and re-watch (Victor Erice’s masterful The Spirit of the Beehive), manuscripts to view online and as reproduced and annotated in books, so many books to read, websites to visit, chronologies to be downloaded etc.

Laurie Sheck is the author of Island of the Mad, available from Counterpoint.

Laurie Sheck is the author of, most recently, Island of the Mad, and A Monster’s Notes, a re-imagining of Mary Shelley’s Frankenstein, which was selected by Entertainment Weekly as one of the 10 Best Fictions of the Year (2009), and long-listed for the Dublin Impac International Fiction Prize. A Pulitzer Prize finalist in poetry for The Willow Grove, she has been a Guggenheim Fellow, as well as a fellow at the Radcliffe Institute for Advanced Study at Harvard, and at the Cullman Center for Scholars and Writers at the New York Public Library. Her work has appeared in numerous publications including The New Yorker, The New York Times, The Paris Review, and The Nation, as well as a recent piece on Dostoevsky’s Empathy in the Paris Review Daily. She has taught at Princeton, CUNY, and Rutgers, and is currently a member of the MFA faculty at the New School. She lives in New York City.

Life in Interesting Times: What Orwell Can (and Can't) Teach Us 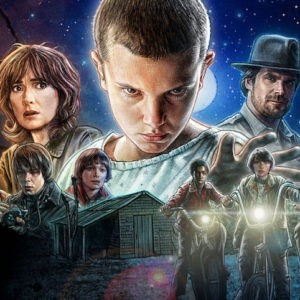 In Philip Kaufman’s movie The Right Stuff, much is made of the titular quality ascribed to test pilots in the 1950s—particularly...
© LitHub
Back to top