On Donald Trump, Stranger Things, and Longing for an Imaginary Past

In Philip Kaufman’s movie The Right Stuff, much is made of the titular quality ascribed to test pilots in the 1950s—particularly the heroic Chuck Yeager, portrayed by Sam Shepard. The “right stuff,” we’re told, is the refusal to panic in the face of dire circumstances. Rather than panicking, a pilot with the right stuff chooses instead to problem-solve: while this situation is difficult and doom is impending, my current approach is not working, so I will now try something else. (The jet loses an engine.) That didn’t work, let me try this instead. (The second engine blinks out.) Perhaps maybe this? (The plane spins to earth.) Or maybe th-

I most like the scene where Shepard rides the horse drunkenly through the desert. It’s gleeful. A joyfully Western—which means grand, which means sublime, which means lonesome, which means that death is quietly present—brand of silliness.

Not the right stuff at all. Perhaps, though, better stuff.

I wonder if a country can have the right stuff. And if so, in what circumstance it might present said stuff. And what the stuff would look like.

In July 2016, Netflix released, to much critical and popular acclaim, the show Stranger Things. Stranger Things (season 1) is an eight episode sequence set in 1983, in small-town America, a type of setting similar to, say, Stephen King’s Castle Rock, Maine, or to what one might find in films like Goonies or Super 8 (the show is filmed in Indiana). Teenagers ride their bikes to and fro with little parental supervision. They lie to their moms about sleepovers so they can go to parties with alcohol. People are hard to reach—no cell phones—and at one point a seemingly important character is tracked down using the phone book.

The plot of Stranger Things is simple: in the opening sequence, one of a group of boys crosses over into “the Upside Down,” a parallel universe inhabited, it seems, by a lone ugly monster. The boy crosses into it because a portal has been opened; now the monster, too, can cross over, stepping into our world to take more victims (it’s a hungry monster; what it ever eats in its own world is not clear). The eight episodes are primarily concerned with rescuing the boy in disparate but ultimately unified attempts led by a total stranger (an enigmatic and psychically powerful young girl), the boy’s mother, his older brother, his multi-racial male group of D&D-playing friends, a vague government defense contractor with sinister intent (whose tests on the young girl, we learn, are what opened the portal), and some others, including another boy’s older sister, who gets her own parallel plot about the hard-knock life of love in high school (she’s slut-shamed, has a shady wealthy boyfriend with his own narrative development, struggles with feelings for another boy, etc).

So: kids and family rescue friend. Monster eats a bunch; monster dies. Enigmatic girl vanishes. All finally is well except, crap, the season concludes with the original abductee secretly puking slimy monsters into the bathroom sink. Bring on season 2 (which Stephen King himself is rumored to be writing).

But still: mostly all is well at the season’s close. It’s Christmas! Families are whole again, and only some people are dead, but mostly bad ones, and the only good dead one, Barbara Holland (“Barb”), was someone we only sort of knew, and we feel more or less cheered as the final credits roll. Stranger Things is slick TV. It features mostly strong acting, an active tempo, and some imaginative set pieces. It is professionally but not artistically shot. But, too, the characters are each one-note, and the premise of the Upside Down and its monster (and, too, the evil defense contractor) are entirely silly. Ultimately the story lacks much impact at all. Which one might imagine the producers of the show (and Netflix itself) readily admitting: the story isn’t the point. The real force at work in Stranger Things is nostalgia.

Netflix has become very adept at creating shows cannily targeted toward certain audiences, and so Stranger Things, devised to be sold more than to be felt. The horror is never horrible; the diverse group of friends is soothing in response to the awful treatment of black Americans the last several (hundred) years; the gender representations are progressive: the mom is triumphant, the father is a deadbeat; the shy kids are the good ones; the rich kids are bad, except one, of course, which shows that rich kids can be good; the cops are good; the vague corporation is bad; the monster dies; the monster dies; the monster dies.

Stranger Things is nothing more than a cleaned up version of Goonies with a weak dash of Firestarter. Badness itself is vague and not that bad, as is illustrated not only by the evil corporation’s glaze-eyed leader and the one-dimensional monster, but even in a bullying scene in which a “bad” 14-year-old shockingly pulls a knife on the ‘good’ kids: this moment is quickly forgotten, glossed over by the magic of teleportation.

The thing about evil, forever, is this: it has agency. It is not a plot device. But in the world of Stranger Things, that’s all it amounts to.

And the thing about 1983 is this: it wasn’t politically correct. But instead of the 1983 reality, Stranger Things presents a contemporary version of films set in 1983, whitewashed of all the real cultural problems of the time (which were themselves already, to great extent, removed from those already-then tame films).

The small town of Stranger Things is, itself, the Upside Down.

The plummeting jet from Kaufman’s film is now a metaphorical one. Perhaps one way we show our right stuff—the way we change our approach in response to failure and in the face of impending doom—is simply by changing the channel. Forget right stuff, anyway—just our stuff. We show it by what we watch. (And eat. And buy. And elect.)

By we, of course, I mean America.

Donald Trump is our president. (Such a strange thing to type.) Though I suppose one might argue that that’s a type of channel change.

Part of the problem is this recreation of a mythical past. An unreal past—a past seen in movies. Which is fine, at least in theory; at least in the isolation of film and literature. Other texts, after all, can be recreated to great artistic success. There is, of course, James Joyce’s Ulysses, an adaptation of The Odyssey wherein two grief-stricken men slowly, over the course of a hard day, come together for a moment of almost tender redemption.

Another recreation: Joan Smiley’s A Thousand Acres (King Lear): repressed child abuse and the shift of American family farming to a corporate model.

These two texts use a format taken from the old so that they might tell new stories. Joyce, Smiley, and any like-minded writers, who go rummaging about in antique shops, in dank old bookstores, wandering the family cabin on the lakeshore, finding beneath the dust-covers an old form that is suggestive and appealing, and as they stand before it they see the opportunity to use that form, to tell a story new, current, timely—

The old form houses the new, a cocoon to the emergent butterfly.

But I think in the end that they, too, may fall short. Isn’t the recycling of the forms of the past just appropriation for the sake of . . . what? Being somewhat familiar? Nostalgia? Cleverness?

It could be a protest chant: An old art / is not enough. A new argument / is what we want.

Retelling as a critical stance—aligned with or against (or both) the original text. I believe in argument before appropriation; or, at least, in step with.

Wherein the servant kills the king, and the daughters, the husbands. Kills them all.

I wonder if there is a line connecting nostalgia and the condition of our country. Stranger Things is really, after all, Reassuring Familiar Things, and nostalgia for a thing that never was is, apparently, good product.

Trump won his campaign, it’s said, on the strength of white voters. But “strength” is not the right word. “Weakness” is better. Mostly—but not entirely—Trump won thanks to “disaffected” voters in the Rust Belt: white male voters yearning for a past in which they could work steady salaried jobs in steel mills or coal mines, and, too, white female voters who felt that their way of life was threatened by the crumbling of the white patriarchal nuclear family. Sincere women who raise kids, bake pies, go to church. Citizens who want one thing: for things to go back to the way they were.

Bill Clinton’s victory song was “Don’t Stop Thinking About Tomorrow.” Trump’s might as well be “It’s the End of the World As We Know It (And I’m Losing My Mind)”: now is broken, we must return to the past. This is how the world used to be, this is how the world should be again. Goes the thinking. But were they there when the world was that way?

The plane is low on fuel.

Did that world even exist?

The left wing is leaking oil.

No matter: enough people believed that it existed, enough wanted to believe.

They stood in the booth.

Both engines are out.

They punched the ballot.

Sean Bernard is the author of the novel Studies in the Hereafter and the collection Desert Sonorous, recipient of the 2014 Juniper Prize. He directs the creative writing program at the University of La Verne.
http://www.therealseanbernard.com 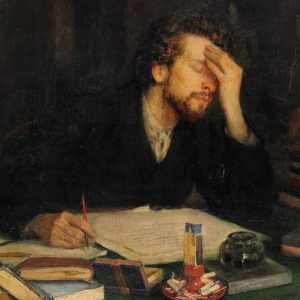 Inaction, no falsifying dream Between my hooked head and my hooked feet –Ted Hughes, Hawk Roosting   The morning...
© LitHub
Back to top