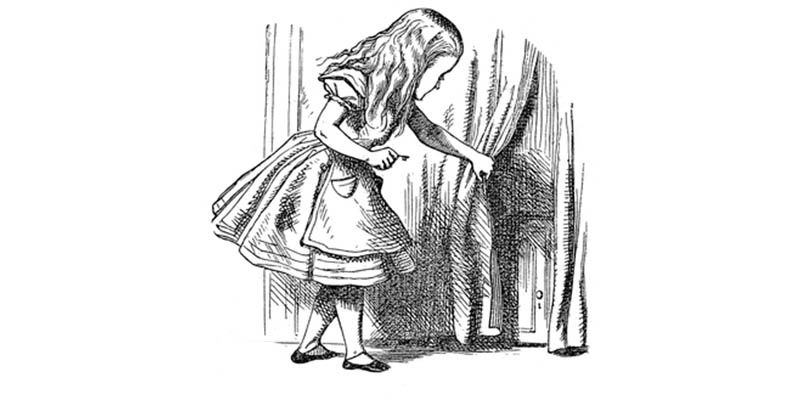 On discovering a secret society in an Alice in Wonderland-themed restaurant.

For several summers, between college semesters, I was a hostess at an Alice in Wonderland-themed restaurant in Manhattan called Alice’s Teacup. At the time, I was living in Gravesend, Brooklyn, so I would leave my home at six in the morning to make it to the Upper East Side in time for the opening shift. Why didn’t I work at a restaurant closer to where I lived? An excellent question! I think I deluded myself into thinking this was somehow a kind of Literary gig, since the restaurant was, after all, inspired by a book.

Many of my coworkers were, as you can imagine, writers and musicians and actors. I think I worked beside a lost Culkin brother at some point. And of course there were artists, so the walls were covered with commissioned murals of scenes from the story. The main point of decor, however, was fairies. There were fairy wings that you were supposed to offer the kids when they came in. There was fairy dust (read: glitter) that I could sprinkle on you while you made a special wish. There was a Fairy Room, which was actually just a crumby hallway with a few tables and folding chairs. I think I had worked there for months before one day, during a lull, the barista and I started rereading Alice’s Adventure’s in Wonderland, only to realize that there are absolutely no fairies in it. There is definitely no magic dust to make your dreams come true. But I digress.

When you tell people that you worked in a restaurant inspired by a children’s book, they say things like, “Oh, that sucks. The kids must have been super annoying.” In reality, the kids were fine and the entitled Upper East Siders who wanted to know why they couldn’t get a table for eight during the Saturday brunch with no reservation right now were super annoying. (It’s okay, though, because I would just offer the kids of those super annoying parents extra fairy dust. Have fun getting that glitter out of the carpet, assholes.) I once had a dirty dish rag hurled at me, but that’s a different story. My point is that when you work at a themed restaurant, you inevitably meet a lot of weirdos, and when that themed restaurant is in the 212, you meet a lot of weird rich people.

One day, some such person arrived at my hostess stand. He leaned in close, and he said, “I’m here for the club.” The club? What club? I said to him, “The club? What club?” He was already exasperated with me. The shift manager was downstairs, putting out a different tiny fire. “The club,” he said, as though putting a slightly different emphasis on the word would change all meaning. Oh, that club! We went back and forth like this for a little while.

Luckily, one of the seasoned servers overheard and ushered them upstairs to the back room behind the Fairy Room, the one saved expressly for bridal showers and birthday parties of groups larger than twelve. When she came back downstairs, she told me that the club was the Dutch Treat Club, a name that meant absolutely nothing to me. So imagine my surprise upon discovering that Alice’s Teacup is basically home to the occasional secret society meeting for people in the arts.

I fell down the rabbit hole, as it were, and this is what I learned. The Dutch Treat Club was founded in 1905 by LIFE editor Thomas Lansing Masson and New York Sun reporter Robert Sterling Yard. The pair routinely took the same train into the city for work, and they found that they genuinely enjoyed each other’s company. They decided to continue their commute conversations over lunch, a gathering that quickly grew. According to their official website (okay, I guess this isn’t really a secret society, but still):

“They wanted a New York City club for creative people—writers, illustrators and later, musical artists and actors—a club not to be dominated by publishers or editors, who were more driven by profit motive. The original 11 members consisted of four writers, four illustrators, two editors and a publisher who was certified as benign.”

A major tenant of the club is that the lunch is “dutch,” meaning everyone pays his own bill. (A sheer joy for the server splitting up those checks!) Other Illustrious Members of the Past include Walter Cronkite, Isaac Asimov, Norman Rockwell, George Abbott, and Presidents Herbert Hoover, Dwight D. Eisenhower, Harry S. Truman, and Gerald R. Ford. Imagine! Now, I have no idea who that man insistent on getting into the club was. I’m very bad with faces. For all I know, he could have been the man at the top of The New Times or an illustrator for The New Yorker or the star of the Metropolitan Opera. It was so exciting to me then, that possibility. I grew up watching Nora Ephron’s New York sparkle across the East River, dreaming of being in rooms like these with people like these. All these creative minds right there, and me, just beneath them.

Of course, looking back at it now, the whole thing hits differently. Scrolling through the Dutch Treat Club Instagram (seriously, who runs this account?), I see only the white, moneyed upper echelon, and I want to be as far away from that room as possible. It’s like finding out there are no fairies in the source material when you had spent all that time just going along with it. I feel the way I did while watching Fran Leibowitz pretend it’s a city. Go below 57th Street! There’s no real magic up there after all.

Like Loading...
Alice in Wonderland Alice's Teacup arts and culture down the rabbit hole Dutch Treat Club eat the rich New York City secret society this exists
© LitHub
Back to top
%d bloggers like this: